Death of Democracy at the hands of Power-Hungry Pakistan Army 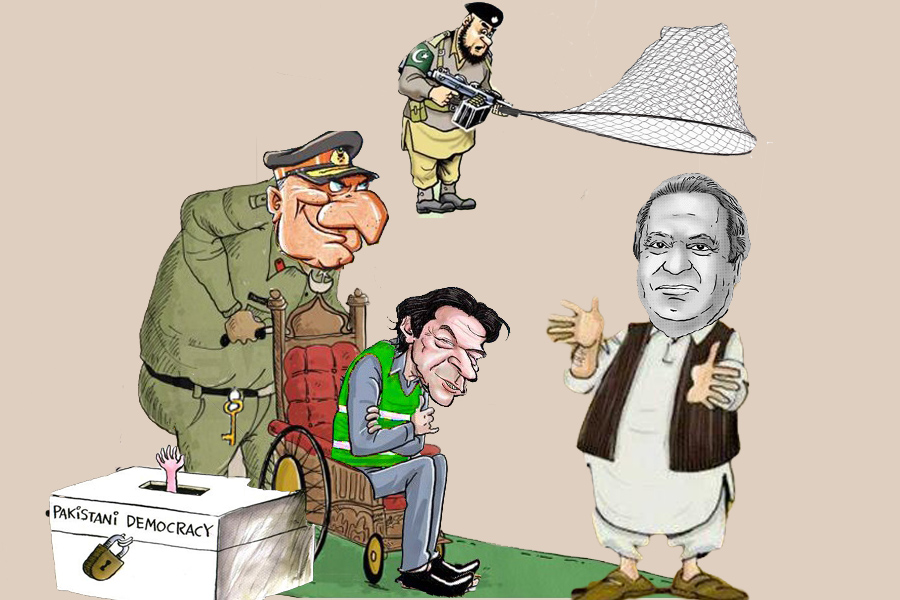 After staying silent for over a year, former Prime Minister Nawaz Sharif addressed a multi-party moot organised by the Pakistan People’s Party. In the speech, the former premier did not hold back and criticised state institutions for imposing a ‘selected’ and ‘inexperienced’ setup, responsible for the woes that the country is currently facing. Open criticism by PLM-N supremo Nawaz Sharif for the current state of affairs of the country stating that not Imran Khan but the force that is responsible behind his election as Prime Minister should be blamed. He clearly mentioned that the opposition was not up against Prime Minister Imran Khan but against those who had brought him into power in the 2018 elections. Even a child in Pakistan knows that “those” who helped bring Imran Khan to power and the ones controlling him like a puppet and are none other than the powerful Army of the state.

Mr. Sharif, having seen the functioning of the dilapidated government, is not wrong in blaming the Pakistan Army for the poor state of affairs of the country today. The Armed Forces of Pakistan have been criticized time and again and in open forums for eroding democratic processes in Pakistan, for being the largest business conglomeration in the country, and for excessive control over the domestic and foreign policy of Pakistan. Critics of the Pakistan Army, like Nawaz Sharif, are silenced or jailed or forced to exile and the rest of the citizens are sent a strong warning against criticizing the army. In Pakistan, the military is considered a part of what is known as The Establishment. They control the state through a backdoor and are a part of deep state.

In Pakistan, it is common knowledge that the Army controls everything. The media, the journalists, the businesses, the economy, the budget-everything comes under the gambit of Army except the one role that Army is supposed to do….defending the nation. It is also well known how dictators had overthrown civilian governments in the past and also the role of the judges who had endorsed their actions.

Out of the 69 years of Pakistan’s existence as an independent state, the military has directly ruled the country for half of the time (and ruled indirectly for the rest). Despite its constitutional status as being under civilian oversight, the military and Inter-Services Intelligence (ISI) have managed to stay afloat with little or no accountability to the Parliament or the courts. Pakistan has always been torn by Mil coups and the somewhat small spats of civilian government, during which the next coup is always under planning, haven’t been able to help the situation in any manner.

The civilian Government in Pakistan is a sham, a pseudo-elected body without any spine.

In the past, the world has witnessed Presidents of Pakistan dissolving its Parliament on the will of the Army Chief but then the former Prime Minister Nawaz Sharif’s government amended the 1973 constitution for the thirteenth time in 1997 to strip the President of Pakistan of his reserve power to dissolve the National Assembly. It triggered the sense of insecurity among the establishment as the amendment was thought of as a “piece of paper” that chewed on its powers and thus the dictator General Musharraf in 1999 crushed the constitution underfoot and took over the country as it was the only way to get the lost authority back. He amended the constitution seventeenth time to restore the lost powers of the president which could be used as the chief sees fit. Former President of Pakistan Asif Ali Zardari during his term constitutionally deprived the President (himself) of his powers to dissolve the Parliament. Amending the 1973 constitution for the eighteenth time, Zardari triggered the sense of insecurity among the supremos once again.

Because there were no powers left in the constitution for the President, the tradition of lobbying the government initiated so to force the ‘theoretically powerful’ Prime Minister to consider the Chief of Army Staff for a reappointment. Zardari kissed the feet of General Kayani by awarding him with a 3-year extension in his service tenure. Kayani’s doctrine was given more time to let it be absorbed in the sufficiently-dead bedrock of the democracy and to help the establishment contain its insecurity by making its boss satisfied. Nawaz Sharif refused to extend the tenure of General Raheel Sharif and is, therefore, facing the consequences of that till today. For Pakistan, its insecure establishment brings more political and economic instability and uncertainty than anything else.

The full-fledged puppet of the establishment Imran Khan acted as he was dictated to victimize the opposition, to bring its leader on its knees in front of the true rulers. Khan –like any other puppet –followed every order of the puppeteers and let no strategy left to turn the Parliament into a complete rubber stamp for the establishment and its chief.  Now that the constitution authorizes the executive to extend the service tenure of the chiefs of the Armed Forces of Pakistan, every COAS will enjoy a 6-year term, more than an elected representative of the country.

The Pakistan Army runs Pakistan’s largest business conglomeration with more than 50 business entities worth over US$20 billion; owned through Army Welfare Trust, Bahria Foundation, Fauji Foundation, and Shaheen Foundation. Ranging from petrol pumps to huge industrial plants, banks, bakeries, schools and universities, hosiery factories, milk dairies, stud farms, and cement plants, the military has a finger in each pie and stands today as the biggest conglomerate of all business in Pakistan. However, the jewels in their crown are the eight housing societies in eight major towns where prime lands in well-manicured cantonments and plush civil localities in the possession of these societies are allotted to military personnel at highly subsidised rates. Even military awards are linked with the grant of farmlands and housing plots to military personnel. Pakistan military’s lust for land is so prolific that their Generals conduct themselves in the manner of feudal landlords and carry the tags of ‘biggest land grabbers and land mafias’ of the country.

The “Culture of Entitlement” in the military started during General Ayub’s time when he commenced the tradition of awarding land to army officers (the size of allotment depending upon the rank of the officer) in the border regions of Punjab and in the newly irrigated colonies of Sindh. General Zia also created a novel way of involving serving officers in commercial ventures by placing military lands and cantonments and the provisioning of logistics to the regional corps commanders. Thus, many senior army officers availed opportunities to acquire multiple plots in various cantonments for themselves at highly subsidised rates. These prime properties soon sparked nepotism in allotment and corruption among both the military and civil bureaucracies.

Several senior service officers have also been parked as ambassadors, governors, and nominated on other high-ranking bureaucratic posts in Pakistan. Successive army chiefs have continued with the practice of strengthening the special perks and privileges of their serving and retired personnel with respective civilian governments reluctantly acquiescing to all the fair and unfair demands of the armed forces.

A major reason for this state of affairs is the independent, unaccountable financial muscle of the military. Since the Ayub era, no civilian government has ever bothered to tame in the military except, to some extent, Zulfikar Ali Bhutto for a short period. Most civilian governments have looked the other way at the financial handlings of the military’s commercial enterprises, primarily to buy peace with the powerful generals. Most members of Pakistan’s civil society and even its parliamentarians have wilfully ignored the military’s economic empire-building.

The Pakistani Military derives its relevance & sustainability from only one element – Anti-India sentiment or the 2 Nation theory. With India’s assertive stand on Kashmir on August 5, 2019, it exposed Pakistani Military’s trump card which gives it importance & supremacy in their country. Of course, the Puppet government propagated the same anti-India sentiments that the military wanted it to. What India has done, to put it simply, is to shift the discussion on Kashmir as a whole to just ‘Pakistan Occupied Kashmir’. And, the Pakistani military understands it’s ‘now or never’ to raise this issue. If the Pakistanis miss the bus on Kashmir this time, they would have lost the narrative on Kashmir forever. They understand this and hence the flurry of events in Pakistan to make this into an international issue. If we were to imagine a hypothetical India-Pakistan scenario where the Kashmir issue is resolved, done & dusted. In this scenario, the focus of Pakistanis would be more on development rather than the army & the military would lose its current relevance in Pakistan. That is why Kashmir for the Pakistani Army is more about maintaining their own power & control than about the Kashmiri people.

The Pakistan Tehreek-e-Insaf (PTI) government was not competent to steer the country to the right direction, which was the reason that the country is in shambles now. While Imran Khan might be Pakistan’s prime minister, it is the Pakistani military that continues to exert influence over foreign and security policies. It goes on to note that Khan came to the office of PM without any governance experience, with analysts suspecting that the country’s military covertly manipulated domestic politics in the run-up to elections last year with an aim to unseat Nawaz Sharif and weaken his party.

The Establishment in Pakistan, which has ruled Pakistan through direct military dictatorship as well as through control over the powerless civilian governments, is a rogue state responsible for its strategic policy of state sponsorship of terrorism by Pakistan and several former and serving Prime Ministers as well as the top army general have admitted to this fact.

The current government, which is relying on crutches, wouldn’t have been formed if the results of the elections weren’t tampered with by the deep state officials of the Establishment who wanted their own gains. This is how you strangle the democracy to death by crushing the constitution underfoot and betraying millions of votes in the Parliament at once!