Does China believe its own propaganda on Uyghurs? 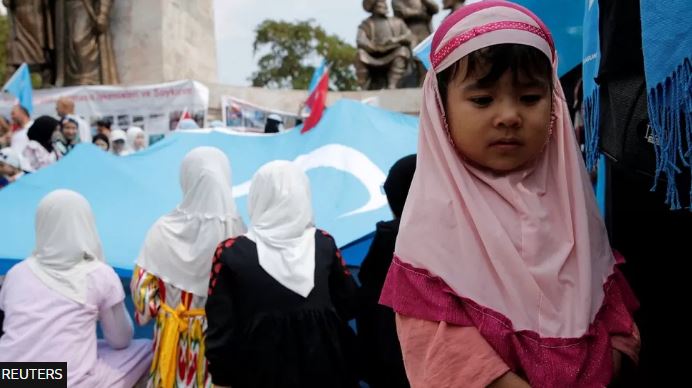 The US has welcomed a long-awaited report by the UN Human Rights Commissioner, Michelle Bachelet, which concludes that China’s policies in Xinjiang may constitute crimes against humanity. The BBC’s John Sudworth, who spent many years covering the story and was eventually forced out of China as a result, considers what it tells us about the country.

At the heart of the Xinjiang story is one of the most important questions of our time. What is China?

A rising superpower, growing ever more prosperous and now deeply embedded into our economies and supply chains, but one that runs a programme of draconian mass incarceration.

How do we understand the relationship between these two realities?

The vast region of Xinjiang, five times the size of Germany, is home to the Uyghurs, a people whose ethnicity reflects their place on China’s far western boundary and at the crossroads of east and west.

Fair skin, green eyes and red hair are common, while their culture, with its Islamic traditions, is as close to the neighbouring countries of Central Asia as it is to their Han Chinese rulers in Beijing.

Xinjiang saw two short-lived independent republics in the early part of the last century and – since the Communists came to power – signs of a simmering separatism have lingered, marked by sporadic outbreaks of violence.

Increasingly, the Chinese state has come to view Uyghurs as not just suspiciously different, but dangerously seditious.

The building of the giant prison camps and the use of arbitrary mass detentions to target almost any expression of Uyghur identity, culture and faith began in earnest in 2017.

The UN report finds credible evidence of torture, forced fertility controls that have led to a dramatic drop in the birth rate, and the violent suppression of Uyghur culture and faith.

But how do we reconcile this dystopia with the booming cities and skyscrapers of Beijing and Shanghai away in the east? Which is the real China, even my editors would sometimes wonder aloud.

From all of my reporting in Xinjiang, one particular incident stands out.

In 2019, the BBC was taken on a highly controlled propaganda tour of four Xinjiang camps. Even in these show facilities, the coercion was hard to hide, but they tried.

We were presented in each facility with displays of dancing Uyghurs, a trope meant to show that they were free to celebrate their culture.

Struggling to watch one such performance, I glanced up and caught the eye of one senior official accompanying us. He was crying. His though, were tears of joy.

It struck me then that for the Chinese authorities, the propaganda façade was not an attempt to disguise what they knew to be a great evil.

They believed they were doing a good and noble thing – saving Uyghurs, as they saw it, from themselves. Or to put it another way, they believed their own propaganda.

In this light, what is happening in Xinjiang places China in a long line of prosperous states that – particularly when unchecked by the oversight of independent courts and a free press – have committed grave human rights abuses.

From theocracies to autocracies and, of course, some democracies too, the list is long.

In response to criticism over Xinjiang, China often holds up the old European colonial legacy of slavery and the repression of indigenous cultures. These were real crimes against humanity, it implies.

But such relativism misses the point and is far from the defence that Beijing thinks it is.

All powerful states can do terrible things, and all too often, the most terrible are done not in the pursuit of what they know to be wrong, but with the moral certainty that they are right.