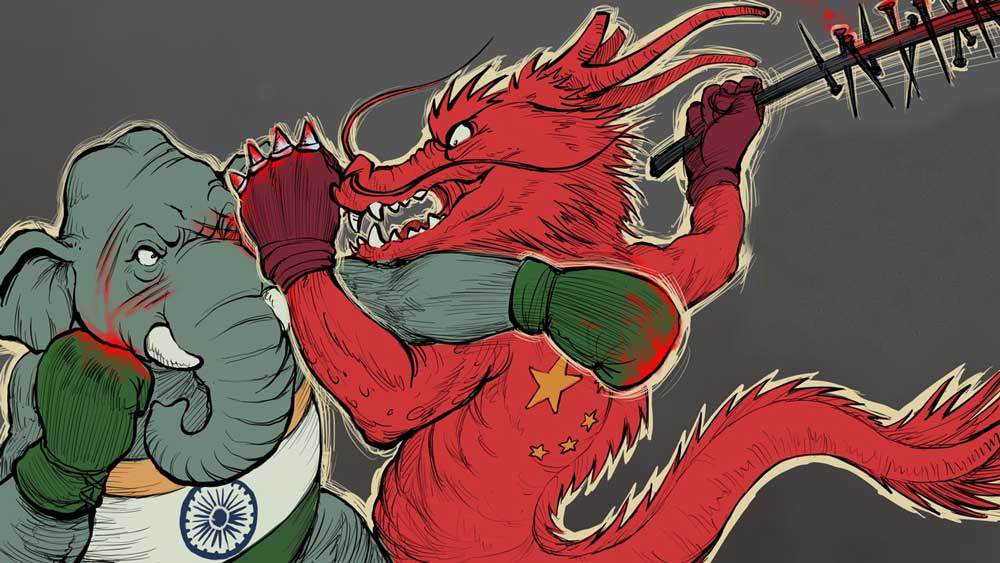 Manifesting of the Inevitable on the Southern Borders of China

Listen to this story.

In the beginning of the year, Myanmar, buoyed by support from India, aggressively renegotiated the BRI deal with China, including agreements reached over CMEC with renegotiated contracts including concessions that the Dragon was forced to concede. This included renegotiated shareholders agreement on the $1.3 billion Kyaukhphyu deep sea port, taking a leaf out of Chinese occupation of Hambantota and Gwadar Ports, for similar Chinese strategic and defence needs.

Vietnam, since last three years, has been the alternate go-to destinations for global FDIs, as Chinese economy stalled, and not any more profitable for foreign companies to set up budget manufacturing. Like Ladakh border standoff in India-China border, there has been significant Chinese border flashpoints with Vietnam, as if South China Sea flare ups were not enough.

China has steadily ratcheted up its assertiveness in the South China Sea. Its surveillance and fishing militia vessels spent much of last year sailing near the Vietnam-claimed Vanguard Bank, the site of a joint Vietnamese-Russian exploration for oil and gas.

In April, Chinese vessels attacked and sunk a Vietnamese fishing boat, while its surveillance ships have recently returned near the Vanguard Bank. This led to China-Vietnam land forces, to a standoff at the borders, akin to Ladakh stand off.

Where peace talks fail, however, a conflict could spark, as we have seen, multiple times. Ladakh and South China Seas brazenness with India and Vietnam have been underplayed by China, but it is finding the same is not being taken in taste by all else, including international community. The last time China and Vietnam fought, a series of border clashes during the 1980s started by Beijing’s retaliation against Hanoi’s move to overthrow China’s puppet Khmer Rouge regime in Cambodia, resulted in resounding Vietnamese victory, goes only to highlight neighbor’s steel.

Myanmar’s national debt stands at $10 billion, out of which they owe $4 billion to China. This is while China trains and harbors Rohingya terrorists, with active support of Pakistan Army-ISI nexus, to force Myanmar’s hand, to comply with draconian BRI deals aiming for a debt trap there.

Speaking to journalists in Russia last month on the occasion of Victory Day parade, commander-in-chief of Myanmar armed forces Senior General Min Aung Hlaing called for international cooperation in the fight against terrorism, saying that terrorist groups exist because of “strong forces”(China-Pakistan).

Many analysts in Myanmar say that Gen Hlaing’s statement was targeted at China, which the Myanmar military suspects is continuing to provide arms to rebel groups on the Myanmar-China border and the Islamic Terrorists of Pakistan-ISI based Rohingya Arakan Army(AA) and the Arakan Rohingya Salvation Army(ARSA).

While China has repeatedly offered to play the role of peace broker in Myanmar’s ongoing ethnic conflicts, senior Army spokespersons in Myanmar claim, that China is not to be trusted. They suspect China of supporting some ethnic insurgent groups in Myanmar, to get a diplomatic upper hand while at the same time meddling in the peace process. According to a report in the Myanmar daily The Irrawaddy, the same is being done to arm-twist Myanmar to accept China’s BRI debt-trap ridden deals.

Like in India, China-Pakistan based Left-Islamic Terrorism infrastructure was uncovered by India-Myanmar intelligence. Between 2015-17, Chinese nationals were charged of funding the Myanmar National Democratic Alliance Army. This is a communist armed group who  used a WeChat account to collect funds worth over $500,000, wherein payments made by Chinese citizens were held in Chinese banks, with coordination and links by ISI.

It was also said that, Myanmar shall continue to have strategic partnership with old ally Russia and all-weather brotherhood with India, from whom they received its first submarine from last year, a Russian-made Kilo-class diesel-electric attack submarine. India continues to provide technical support for the vessel as well as participate in Air Force and Naval tactical cooperation in the region.

Unsurprisingly, India-Myanmar have decided to expedite India backed infrastructure projects and widen security ties with India, as it seeks to balance China’s expanding hawkish presence in the country, in the backdrop of Beijing’s active cross border support for Islamic rebel groups aimed to push for early completion of BRI projects.

Both nations are working on a transit transportation project that passes through the northeastern Indian state of Mizoram, connecting Myanmar to the Arabian Sea. The project will open up sea routes and a highway transport system. It will link a seaport in the Indian city of Kolkata to Rakhine and the Chin states in Myanmar’s west.

Thus active support to terrorism by China is an evident recipe for border confrontation. This can force Myanmar Armed forces to breach the border with China, to neutralize the Islamic Terrorist camps inside China.

Chinese state banks are facing insurmountable capital constraints, since last three years, being acute since October 2019- deteriorated since Feb 2020, and non-performing loans are likely to rise at home, owing to COVID-19 related financial weakness. Investments into the domestic health sector or other related infrastructure were slated to increase happily celebrating COVID-19, however world arose against China’s increasing brazenness and lack of quality and trust.

Since Chinese state banks have reduced funding, and shall continue to do so, then Chinese private financial sectors will be up against weakening domestic conditions, to play an even bullish role.

The private sector of China, will likely focus on the most commercially profitable supply chain as well as most Non-Chinese avatar related investments, especially those related to industrial or mixed use commercial projects. They aim to accrue benefit from the relocation of production away from China to other low-cost destinations, as well as to hide behind the mask of a neutral companies in BRI nations, who are debt-trapped by China.

Sadly, Global economy, while shunning and shying away from Chinese state owned companies, have also uncovered this master plan by Chinese companies, to create business frontends in name of BRI debt trapped nations, and guzzle all profits, in the name of BRI Payback.

US, QUAD and Indian military presence and playouts all around China, in Asia and Africa is due to the same. Vietnam-Myanmar-India cooperation indicates just that.

Vietnamese Ambassador Pham Sanh Chau met Indian Foreign Secretary Harsh Vardhan Shringla recently, to brief him on escalating tensions in the South China Sea. They are also thought to have featured in discussions during a web meeting between Indian external affairs minister S. Jaishankar and his Vietnamese counterpart Pham Binh Minh this week.

This is not the first time China had deployed bombers to the Paracels, as they had dispatched several H-6K long-range bombers there in 2018. However, While in Jan 2020, Myanmar’s renegotiating BRI to advantage India-Myanmar maritime and sovereign interests, Vietnam’s openness about the ambassador’s meeting and military cooperation is majorly significant to indicate readying the encircling of China on land.