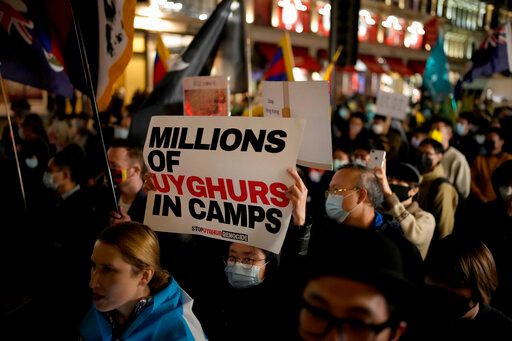 Several European lawmakers are pushing to designate alleged human rights abuses against Uygurs and other ethnic Muslims in Xinjiang by China as “genocide.” The resolution will be presented to the European Parliament this week.

The parties will enter negotiations on Tuesday to finalize the text of the resolution, which will be reviewed on Wednesday and hopefully put to a vote on Thursday.

Four of the biggest parties in the European Parliament, the center-right European People’s Party (EPP), the center-left Renew Group, the Socialist and Democrats (S&Ds) and the right-wing European Conservatives and Reformists, are likely to back the motion, giving a high chance of it passing, according to the South China Morning Post

The Parliament has adopted numerous resolutions on Xinjiang, but stopped short of using the term “genocide”. A change that would signify a sterner stance towards relations with China in all of the EU.

Even if the resolution were to pass, it is not binding and will not cause a shift in the official position of the European Union. Rather, it is a manifestation of prominent views in the Parliament, which is made up of directly elected members from each of the EU’s 27 member states.

The EPP, the party of European Commission President Ursula von der Leyen and former German chancellor Angela Merkel, was one of the biggest supporters of increased cooperation with China until last year. The S&Ds, the European party of current German leader Olaf Scholz, have, likewise, been openly supportive of closer ties with China.

“The #XinjiangPoliceFiles are another confirmation of the horrible atrocities made by the #CCP. I will negotiate the text for the urgency resolution tomorrow. Vote: Thursday,” David Lega, the EPP’s chief negotiator, said in a tweet.

“the credible evidence about birth prevention measures and the separation of Uygur children from their families amounts to crimes against humanity and genocide,” a draft text from the EPP negotiating position said, according to the South China Morning Post

The Uygur Tribunal and other credible, independent investigative bodies and research organizations, which are the source of said evidence, have concluded that “Chinese government policies in Xinjiang amount to torture crimes against humanity and genocide”.

The Uygur Tribunal is an unofficial panel of lawyers and campaigners that found last year that Chinese President Xi Jinping bore primary responsibility for what it said was genocide in Xinjiang.

Beijing dismissed it as a “political farce performed by a few clowns”.

Human rights groups believe China has detained more than one million Uyghurs against their will over the past few years in a large network of what the state calls “re-education camps”, and sentenced over a million to serve prison terms.

Several police files, according to the BBC, revealed details of China’s use of these camps and described the routine use of armed officers and the existence of a shoot-to-kill policy for those trying to escape.

China said the Xinjiang Police files amounted to “political manipulation under the guise of human rights, in an attempt to undermine the prosperity and stability of Xinjiang and curb China’s development.”

The magnitude of what the Uyghurs have experienced in Xinjiang, from detainment to forced sterilization to outright executions, has slowly made it’s way to western media outlets due to the stringent control China exerts over its media.

But over the past ten years, as more documents have been leaked to the press and more Uyghur activists have escaped the country, a bleak picture has emerged, leading some observers, including the US, the UK, France, Canada, the Netherlands and the Czech Republic, to classify China’s ongoing human rights violations as genocide.

“There has never been any ‘genocide’ in Xinjiang,” Liu Pengyu, spokesman for the Chinese embassy in Washington, said. “We hope the relevant personnel can hold an objective and just position, stop making irresponsible remarks.”