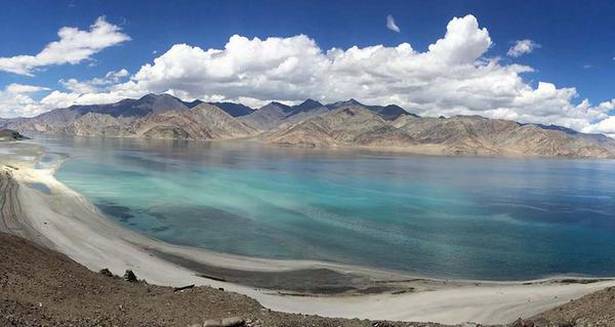 The ongoing standoff in eastern Ladakh has led to construction of infrastructure on both sides of the India-China border. One of the latest constructions is a bridge being built by China on the Pangong Tso. The new bridge has been spotted in satellite images.

Where is the bridge being built?

China is building the bridge, about 400 m long and 8 m wide, close to the friction points on the north bank of the Pangong Tso, and the Chushul sub-sector on the south bank. It will help China mobilise troops quicker, if needed.

The bridge is around 20 km east (35 km by road) of Finger 8 on the north bank. In India’s perception, the Line of Actual Control lies at Finger 8. The site of the bridge is within India’s claim line, although the area has been under Chinese control since 1958.

The site is east of an old ruin named Khurnak Fort. China, which calls the area Rutong County, has a frontier defence company at Khurnak Fort, and a water squadron deployed farther east at Banmozhang.

Pangong Tso is a 135-km-long landlocked lake. More than two-thirds are under Chinese control. The bridge is near the halfway mark.

Why is this area important?

The Fingers on the north bank have seen frequent clashes. Finger 4 was one of the first friction areas in the current standoff.

Second, the banks of the lake were among the most sensitive friction points in May 2020. Troops and tanks faced each other just a few hundred metres apart in some places, until the disengagement in February 2021.

At the end of August 2020, India outmanoeuvred China to capture the previously unoccupied heights of the Kailash Range on the south bank. Indian troops positioned themselves atop Magar Hill, Gurung Hill, Mukhpari, Rezang La, and Rechin La, dominating the Spanggur Gap — which can be used for launching an offensive, as China did in 1962— and also gaining a view of China’s Moldo Garrison. Subsequently, Indian troops positioned themselves above the Chinese in the Finger area on the north bank too.

How does the bridge help China?

Its main objective appears to be quick mobilisation of PLA troops between the two banks at one of the lake’s narrowest points. The Kailash range is around 35 km west of the bridge site. According to security establishment sources, when India carried out this operation, Chinese troops could not mobilise as quickly as they might have wanted; they had to go around difficult terrain on the north bank and double back on even tougher terrain on the southern bank to get to Chushul.

The bridge will enable Chinese troops to simply cross over, slashing travel time to the Kailash range from about 12 hours to about four hours.

Damien Symon, a geospatial intelligence expert with The Intel Lab, a collaboration of intelligence experts, tweeted on Tuesday that the “development of this bridge” appears to “strengthen the idea of permanency being established by Beijing in the region, committing to its territorial claims with India by modifying the unforgiving landscape in its favor”.

Symon reported in November 2020 that after India took the Kailash heights, China began making a new road to Spangur lake. Now, “the construction of this bridge hence appears to be a lesson learnt by PLA planners looking to provide seamless connectivity & rapid mobility for elements responding in the future, to the frontline with India”.

What is India’s response?

External Affairs Ministry spokesperson Arindam Bagchi said on January 6 that the “government has been monitoring” the bridge construction activity “closely”.

“This bridge is being constructed in areas that have been under the illegal occupation by China for around 60 years now.” The government, he said, “has been taking all necessary steps to ensure that our security interests are fully protected” and as a part of these efforts the budget for development of border infrastructure has been significantly increased and more roads and bridges have been completed than ever before.

Army Chief General M M Naravane said last week that like China, India too is upgrading and developing infrastructure along the northern border in a holistic manner including “roads, tunnels, all weather connectivity, strategic railway lines, additional bridges, storage facilities” for supplies. “Major efforts have also been undertaken to what all dual use infrastructure is there which can be made use of, which is available in the civil domain”.

“Because of all that that we have done, I think we are in a much better position than where we were a year and a half ago, and also much better prepared to meet any challenge that is thrown up in the future,” he said.

In 2021, over 100 projects were completed by the Border Roads Organisation in the border areas, most of which were closer to the border with China. India is also improving surveillance along the border, along with building new airstrips and landing areas.

What is the status of the standoff?

While several friction points have been resolved, with both sides disengaging from Patrolling Point (PP) 14 in Galwan Valley, north and south banks of Pangong Tso and PP17A near Gogra Post, the recent meeting between senior military commanders last week was inconclusive in achieving a breakthrough for the remaining areas. The talks have been stuck in a stalemate since July.

As of now, there is a platoon-sized strength of soldiers from either side at PP15 in Hot Springs. China has been blocking Indian troops from accessing its five traditional patrolling points in Depsang Plains — PP10, PP11, PP11A, PP12 and PP13. In Demchok, some so-called civilians have pitched tents on the Indian side of the LAC, and have refused to vacate.

Each side has over 50,000 troops in the region, along with additional air defence assets, artillery, tanks and other weapons.