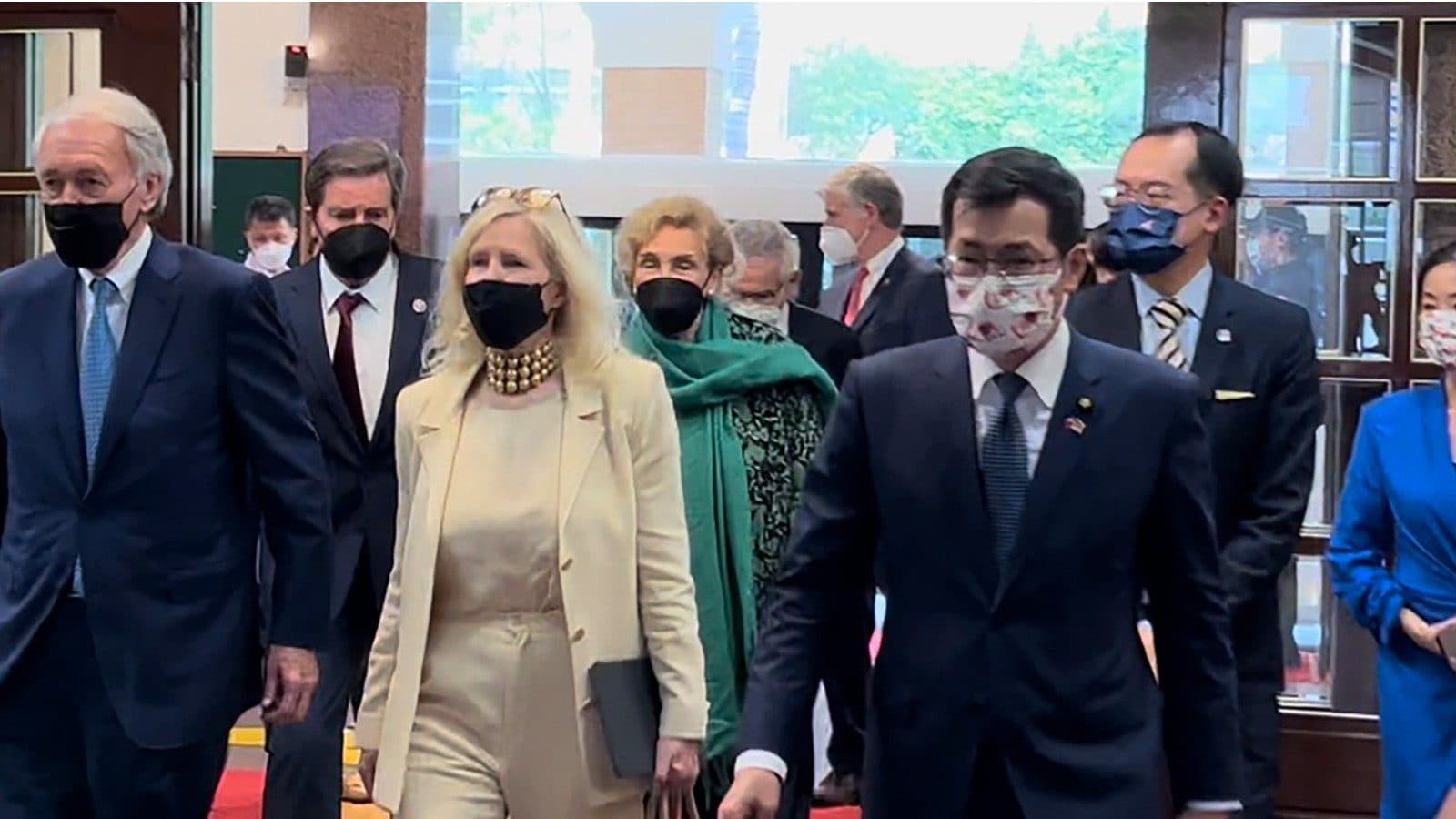 Taiwan is high on the summer travel list for US members of Congress on their August recess this year, as US lawmakers make a point of asserting American support for the self-governed island despite objections from China. The payoff photos from this week’s five-member congressional visit, like that of House Speaker Nancy Pelosi less than two weeks earlier, are meant as a pointed message to China: newly arrived lawmakers disembarking on the tarmac of Taipei’s international airport, greeted by beaming Taiwanese officials glad for the American support.

Sen. Ed Markey, a Massachusetts Democrat, on Monday was wrapping up the second U.S. congressional delegation there this month. Pelosi had been the most senior U.S. official in a quarter-century to visit Taiwan, underscoring the longstanding U.S. policy of solidarity with the island’s democratically elected leaders.

China claims Taiwan as part of its territory. It views any visit by US officials as a recognition of the island’s sovereignty.

So far, China’s response to Markey’s delegation has been more restrained than that of two weeks ago, when Beijing launched days of intensive military maneuvers around Taiwan and froze some ties with the U.S. government over Pelosi’s visit.

WHY DID MORE LAWMAKERS TRAVEL TO TAIWAN THIS MONTH?

Partly, to show they can, and will. Pelosi framed her trip to Taiwan as part of an obligation by American leaders to stand up for the world’s democratic movements against authoritarian governments. The mission itself is in many ways the message for lawmakers — demonstrating vividly that they will maintain U.S. ties with Taiwan despite threats from China, which under President Xi Jinping is growing ever more confrontational in making broad territorial claims in the region.

Taiwan and mainland China split during a civil war in 1949. But China claims the island as its own territory and has not ruled out using military force to take it.

The US recognizes Beijing as the government of China but maintains informal diplomatic, defense and trade ties with democratic Taiwan.

Markey, a congressional veteran of more than 40 years, was one of the signers of the 1979 Taiwan Relations Act. The law pledged ongoing U.S. relations with the Taiwanese.
Meeting with President Tsai Ing-wen on Sunday, Markey pledged “support for peace and stability in Taiwan as they face growing authoritarian pressure from Beijing,” according to a statement from his office.

But Markey also expressed the U.S. desire to avoid unnecessary conflict in the region, and praised Taiwan for its restraint as tensions with China rose over Pelosi’s trip.

HOW DID CHINA REACT?

It was not clear if the new drills had already started. Officials gave no details about where and when they would be conducted.

When Pelosi visited, Beijing fired missiles over the island and into the Taiwan Strait and sent warplanes and navy ships across the waterway’s midline, long a buffer between the sides.

“China will take resolute and strong measures to defend national sovereignty and territorial integrity,” Chinese Foreign Ministry spokesperson Wang Wenbin said at a daily briefing Monday. “A handful of U.S. politicians, in collusion with the separatist forces of Taiwan independence, are trying to challenge the one-China principle, which is out of their depth and doomed to failure.”

HOW HAS BIDEN RESPONDED?

President Joe Biden called China’s unusually aggressive response to Pelosi’s visit unwarranted, saying that the U.S. is sticking with its decades-old “one-China” policy. That includes no intention of recognizing Taiwan as independent, but also no support for any effort by China to change the status quo between Taipei and Beijing.

The latest congressional delegation traveled with far less attention than Pelosi’s did, and the White House likewise has been quieter. It hasn’t commented, but State Department spokesman Ned Price was asked about it Monday.
“Any response to a peaceful visit by members of Congress, any response that entails bellicose rhetoric or military maneuvers or provocative actions is totally unnecessary, and an absolute overreaction,” Price said.

Kurt Campbell, Biden’s coordinator for Indo-Pacific affairs, underscored late last week the U.S. will keep taking steps of its own in the weeks and months ahead to demonstrate and deepen support for Taiwanese leaders.

That includes an upcoming announcement on Taiwan-US trade, and U.S. military movements through the Taiwan Strait.

ARE THE CONGRESSIONAL DELEGATIONS TO TAIWAN UNUSUAL?

Not at all. Price said there have been 10 this year alone. With one notable exception — Pelosi’s — they take place with little public attention.

Administration officials had argued in the context of Pelosi’s trip that congressional visits to Taiwan are normal and unremarkable, accusing Beijing of stirring up tensions with caustic rhetoric.
Several officials noted that the Chinese reaction to Markey’s trip was far more subdued than to Pelosi’s. They also suggested it might be a sign that China is reverting to its routine opposition to congressional travel to the island while cautioning that the continuing Chinese military drills in the Taiwan Strait remain a concern.