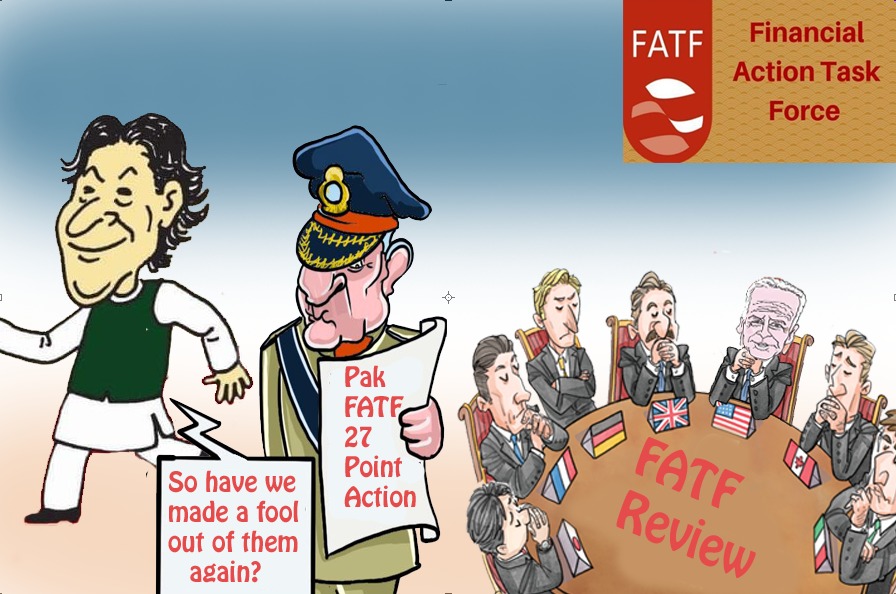 Like numerous times Pakistan has been placed in Financial Action Task Force (FATF)  grey lists, in June 2018 FATF placed Pakistan on the grey list again,  to implement a plan of action to curb money laundering and terror financing by the end of 2019. That kept getting extended till now, with repeated warnings.

Early this year, they maintained that Pakistan must have an effective system to deal with terror financing, which it did not have even after 3 years. Pakistan courts must give effective, decisive and proportionate punishment to those involved in terrorism, the global terror financing watchdog had said

The FATF  decided to maintain Pakistan’s status on its ‘grey list’ of countries with inadequate control over curbing money laundering and terrorism financing until June.

Pakistan’s Fraud to comply with FATF

In November 2020, Pakistani court, sentenced Islamist leader Hafiz Saeed, founder of Lashkar-e-Taiba (LeT), the militant group found responsible by the United States and India for the 2008 Mumbai siege, to 10 years in prison on two charges of terrorism financing.

However this has not been new, and the same Terror Kingpin, while arrested in 2016 and 2017, after coming under pressure from the world community and FATF, was freed by a lower court. Hence in 2017 also after the storm blew over, Pakistani authorities acting on a court order freed Hafiz Saeed from nearly 11 months of house arrest in Lahore.
A jubilant Hafeez Saeed, in a video message released by his Jamaat-ud-Dawa (JuD) radical Islamist frontend, told supporters his freedom was a vindication of his innocence.

As investigations revealed, Hafiz Saeed had never been in Lahore’s high-security Kot Lakhpat jail, as had been widely publicized. “He is mostly at home… ostensibly in protective custody that even lets him receive guests,”. This implies, his terror financing and coordinating activities have been continuing with abandon, while in FATF’s eyes his wings are clipped.

And imagine the abandon with which he shall resume his Terror activities, when upon exiting FATF noose. What shall stop him to proclaim innocence and feel vindicated, by the same compromised Pakistani Judicial System once again?

Another habitual terror kingpin, Lashkar-e-Taiba (LeT) operations commander Zakiur Rehman Lakhvi, who is co-mastermind of Mumbai 2008 as well as involved in militant activity in a number of other regions and countries, including Chechnya, Bosnia, Iraq, and Afghanistan. He was sentenced but roaming free since 2015, was re-arrested by Pakistani authorities on 02 Jan this year, on charges of involvement in terror financing: just to Comply Temporarily with FATF stipulations for Pakistan to exit the Grey List.

According to reports, he too is able to work from home, instead of being in Jail, and operate his Terror with impunity. He in all likely, shall be set free on the pretext of being given bail, without restraint.

While Terror continues in Kashmir under a New Name: FATF fooled

While Pakistan finds it a wasteful exercise to rein in their Terror Troops: Pakistan either changes names or rein them in, to lie low till the FATF storm has passed. It tried the same to have the nomenclature The Resistance Front(TRF) in Kashmir.

Even as early as this year, the Terror Troops operate and kill with abandon, as investigation agencies have found evidence that the TRF is basically a smokescreen used by the LeT and sometimes other outfits like Hizbul Mujahideen(HM) and Jaish-e-Mohammed(JeM).

TRF has been involved in several attacks in the past year. In one of its first attacks, a grenade was lobbed by the group’s men on CRPF in the Lal Chowk area of Srinagar in February this year. Two CRPF men and four civilians were injured.

Pakistan uses this group to interfere politically in Kashmir. The TRF has been involved in most attacks on political workers in the valley this year. The focus clearly has been on targeting the Political activists. As per details, the militant group has been involved in the assassination of 11 political workers this year in Kashmir. Out of the 11 killed, nine were associated with the ruling party in the Centre.

Post-August 5 abrogation of Article 370, Fida Hussain – the slain BJP general secretary of BJP Yuva Morcha, was amongst five members of the party, who were killed in Terror attacks last year.

On 07 June, with the killing of Ajay Pandita, a total of  19 panchayat members have been killed by terrorists, who wanted to create fear among the people and force mass resignations to disrupt democratic institutions in Kashmir.

Is that out of the agenda of FATF?

Pakistan had been celebrating exiting the FATF grey list in the past, as they feel they have fooled the FATF and the world peace once again. While FATF repeatedly falls back to hauling up Pakistan again and again after every 2-3 years, as if unable to come out of Pakistan’s trap.

The nation, where a globally designated terrorist Hafiz Saeed is able to float a Political Party and support and distort the democratic elections thereon, holds no rightful place in the world community as a reliable member. FATF shall; be repeating this exercise, again and again, two-three times every decade.

While Pakistan doesn’t intend to change its Terror Stripes.

The world turned a blind eye to Uyghurs for many decades, and now they are undergoing a genocide, Singling out China now is already beyond redemption.

Now if the FATF turns a blind eye to Pakistan Terror infrastructure and their sinister intent, will they wait to regret the same when instead of 9/11, they wake up to a Nuclear version of  9/11 on American/European soil?

This merry-go-round of hopping in and out of FATF Grey list of Pakistan needs to be a liner exercise and needs to be driven to a point of no return. After all, action now is always better than regrets later.