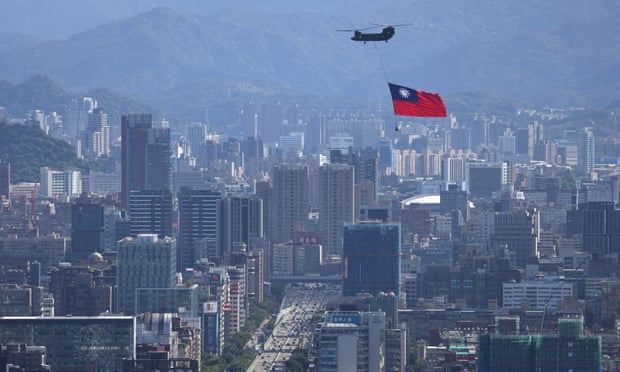 A declining number of Taiwanese people fear an imminent war with China, according to a new poll suggesting the rest of the world is far more worried than those at the centre of this potential geopolitical flashpoint.

According to the poll, published on Thursday by Taiwan’s Commonwealth Magazine, 35.4% of respondents said they were worried about a military conflict breaking out over the Taiwan Strait within the next year, a decrease of nearly 15 percentage points on last year’s survey. The survey also found 59.7% of people do not think Beijing will ultimately use force to take Taiwan, while more than 35% believed it would.

Beijing considers Taiwan to be a breakaway province of China and has pledged to take it by force if necessary. Some analysts see Xi Jinping’s “reunification” pledge as a key goal of his legacy, but the current democratically elected government in Taipei says the island is already a de-facto independent nation.

In the year between the Commonwealth Magazine annual polls, China has markedly increased its rhetoric and actual intimidation of Taiwan, with record numbers of air force flights – part of Beijing’s warfare-adjacent “grey-zone” activity – into Taiwan’s air defence identification zone.

The survey results also showed high levels of trust in the US coming to Taiwan’s aid in the event of hostilities, with 54% of respondents saying they thought the US military could effectively protect Taiwan. Separately, 58.8% said it was a possibility that the US would send troops to help Taiwan in the event of war.

The US sells billions of dollars in weaponry of a defensive character to Taiwan. Washington officials have also made statements suggesting it was likely to come to Taiwan’s aid militarily in case of conflict. For decades the US has operated a policy of strategic ambiguity, neither confirming nor rejecting commitments to help, in order to deter provocative action by both Beijing and Taipei.

Alexander Huang, the director of the opposition Kuomintang’s (KMT) international affairs department, suggested the results showed Taiwanese people were in denial of the reality. “China’s military threat is a fact Taiwanese are not willing to confront because it would incur real costs,” he told Commonwealth magazine.