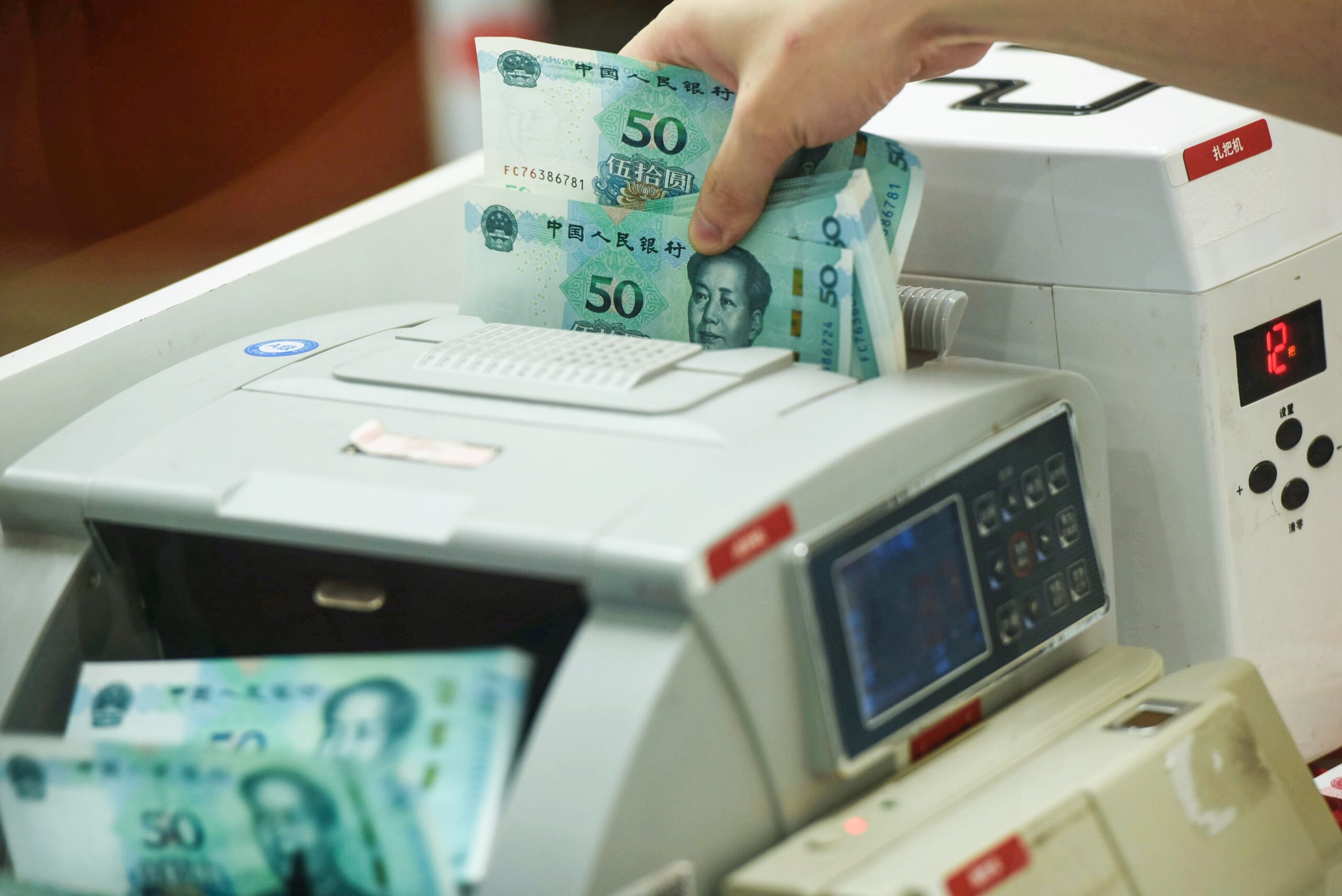 Investors are ditching Chinaon an unprecedented scaleas a cocktail of political and business risks, and rising interest rates elsewhere, make the world’s second biggest economy a less attractive place to keep their money.China witnessed $17.5 billion worth of portfoliooutflows last month, an all-time high, according to most recent data from the Institute of International Finance (IIF). The US-based trade association called this capital flight by overseas investors “unprecedented,” especially as there were no similar outflows from other emerging markets during this period. The outflows included $11.2 billion in bonds, while the rest were equities.Data from the Chinese government also showed a record bond-market retreat by foreign investors in recent months. Overseas investors offloaded a net 35 billion yuan ($5.5 billion) of Chinese government bonds in February, thelargest monthly reduction on record, according to China Central Depository and Clearing. The sell-off accelerated in March, hitting a new high of 52 billion yuan ($8.1 billion).”China’s support for the Russian invasion of Ukraine was clearly the catalyst for capital to leave China,” said George Magnus, an associate at the China Centre at Oxford University and former chief economist for UBS.

China and Russia proclaimed in February that their friendship had “no limits.” That was before Russia invaded Ukraine. Now, with Russia’s economy being slammed with sanctions from all over the world, Beijing has not rushed to help out its northern neighbor, fearing that it too could get caught up in sanctions. But it has also refused to condemn Russia’s attack on Ukraine, seeking to portray itself as a neutral actor and blaming the situation on the United States.“There is nervousness about China’s ambiguous, but Russia-leaning stance on the Ukraine conflict, which raises worries that China could be targeted by sanctions if it helps Russia,” said Martin Chorzempa, a senior fellow at the Peterson Institute for International Economics, who has studied China’s economy and US-China relations.The war in Ukraine has also heightened concerns about the risk that China could increase its military force against Taiwan, triggering a massive flight of capital from the Asian island.But geopolitical tension is not the only reason behind the exodus. The rate hike in the United States and China’s strict Covid-related lockdowns have also played a role in scaring investors.The US Federal Reserve is increasing interest rates for the first time since 2018 to tame inflation, while the People’s Bank of China has entered an easing cycle to bolster its faltering economy. That means China looks less attractive to investors when compared with the United States. Earlier this month, yields on China’s 10-year government bond fell below US Treasury yields for the first time in 12 years.And the yuan hit a six-month low against the US dollar.”The rise in interest rates, especially in the US, makes the nominal return associated with Chinese fixed income assets less attractive on a relative basis,” Chorzempa said.Furthermore, Beijing’s unwavering commitment to its zero Covid policy has taken a massive economic toll, and increased uncertainties about future growth.”The economy is enfeebled and being made worse by government actions and by zero Covid policies,” said Magnus.

China’s economy slowed sharply in March — consumption slumped for the first time in more than a year, while unemployment in 31 major cities surged to a record high — as escalating Covid lockdowns in Shanghai and other major cities severely hit growth and supply chains.
Some economists are even talking about the possibility of a recession this quarter, as Beijing looks determined to hold on to its zero Covid policy despite the hefty price.A number of investment banks have slashed their forecasts for China’s full-year growth in the past week. The International Monetary Fund on Tuesday cut its growth forecast for China to 4.4%, down from 4.8%, citing risks from Beijing’s strict zero Covid policy. This is well below China’s official forecast of around 5.5%.

Confusion about the future

With these worries mounting, some fund managers and analysts have started questioning whether they should invest in China at all.”China is seeing deep foreign capital outflows as doubts increase regarding its basic investability,” said Brock Silvers, managing director for Kaiyuan Capital, a private equity investment firm based in Shanghai.The pandemic is not the only reason behind China’s slowdown. A lot of the country’s current economic pain can be traced back to the sweeping regulatory crackdown on the private sector, which was unleashed by President Xi Jinping in 2020. There are fears that the government will continue to clampdown on sectors ranging from education to technology this year.”Global investors don’t want to play regulatory guessing games or worry that tomorrow’s news may deplete another otherwise attractive company or business model,” Silvers said.The speed and ferocity with which authorities have acted against private enterprise have startled even the closest China watchers.

A set of rules unveiled last July essentially shut down the $120 billion private tutoring industry, putting tens of thousands of companies out of business. Another decision by regulators to ban Didi — the country’s biggest ride-hailing app -— days after its US IPO stunned international investors and cost them dearly. The crackdown resulted in a steep sell-off in Chinese stocks worldwide.The Nasdaq Golden Dragon index, a popular index that tracks more than 90 US-listed Chinese companies, lost 31% in the third quarter of 2021, the worst quarter on record. It then shed another 14% in the final quarter of last year. By comparison, the S&P 500 rose 0.2% and 11% respectively in the third and fourth quarters of last year. The Nasdaq Composite also surged 8% in the final quarter of 2021.Some of the money flowing out of China may have gone into US dollar assets, while there is also “a notable switch from China to India,” according to Qi Wang, chief investment officer for MegaTrust Investment in Hong Kong.

The crackdown on the private sector has also impacted private equity funds that focus on China.Funds that raise US dollars to invest in China only attracted $1.4 billion in the first quarter of 2022, down 70% from the previous quarter, according to Preqin, a London-based investment data firm.A separate survey by Bain & Company showed that Greater China-focused private equity funds attracted $28 billion in new funding for the second half of last year,down 54% from the first half, as global investors are increasingly concerned about political and economic uncertainty in the Chinese market.”Looking ahead, about 55% of respondents expect the [fundraising] situation to be more challenging in next 12 months,” said Kai Zhong, a manager on the China Private Equity team at Bain & Company.

However, while bond and equity funds may be slashing their exposure to China, there’s evidence that global companies are continuing to invest in Chinese businesses.Foreign direct investment inflows to China hit a record high of$173 billion in 2021, up 20% from the previous year, according to data from China’s Ministry of Commerce.Chorzempa noted that the record FDI came even though “the regulatory uncertainty and a darkening view among policymakers outside of China was already highly salient.””So it is not clear whether the data from the last two months represents a paradigm shift or more of a temporary recalibration to a still very strong investment relationship, especially with Europe,” he said.According to an annual survey conducted by the European Union Chamber of Commerce in China last year, only 9% of nearly 600 European companies operating in China planned on shifting any current or planned investment out of China, the lowest share on record.Still, there are signs that some of them have become anxious about China’s zero Covid policy.