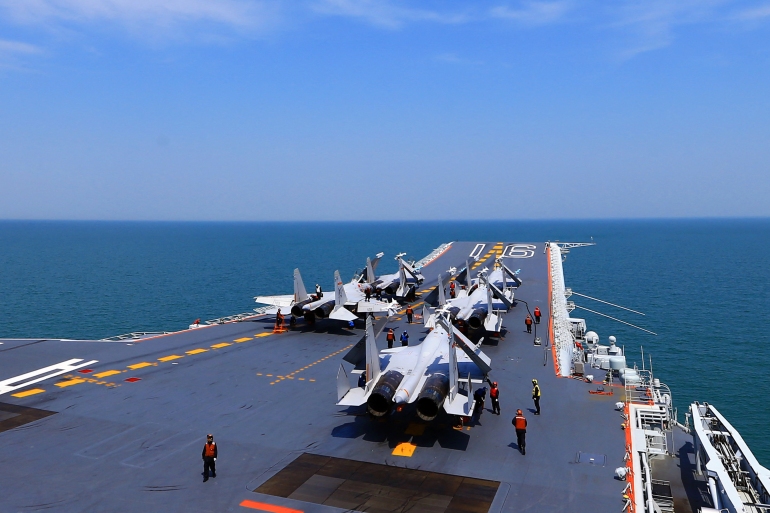 Chinese shipyards that are at the heart of Beijing’s drive to modernise its navy are also seeing orders and technology transfer worth billions of dollars from commercial shipping companies in dealings that researchers say could inadvertently help the Chinese military’s modernisation plans.

The Center for Strategic and International Studies (CSIS) says the evidence suggests profits from foreign orders are probably helping “lower the costs of upgrading China’s navy”.

China is the biggest builder of large ocean-going vessels in the world and its top shipyard – China State Shipbuilding Corporation (CSSC) – controls 21.5 percent of the global commercial shipbuilding market.

It also produces warships for the Chinese navy, and CSIS says that is a risk, especially given the lack of transparency about shipbuilding companies and their work with the military.

“CSSC is a linchpin in Beijing’s military-civil fusion (MCF) strategy, which aims to upgrade the People’s Liberation Army (PLA) and level up China’s military science and technology industries while simultaneously strengthening instruments of national power across the board,” the think tank said in a paper published last month.

China has emerged as the world leader in ship-building since merging its commercial and military yards to make them more competitive against rivals in Japan and South Korea. It now produces more merchant ships in terms of tonnage than any other country, according to CSIS.

“A lot of the entanglement we wrestle with now in terms of the security perspective is very much because of where we have gotten because of market forces,” Matthew Funaiole,  a senior fellow with CSIS’s China Power Project and one of the author’s of the report, told Al Jazeera. “We are at the point now where we need to work out how to structure that relationship.”

CSSC is among a number of firms subject to US sanctions over military links, but CSIS said satellite imagery showed its four shipyard units were continuing to build vessels for shipping lines outside China and Hong Kong even as they worked on ships for the navy.

Between 2019 and 2021, the four CSSC-controlled shipyards received orders for at least 211 commercial vessels, according to CSIS data, with foreign companies placing 64 percent of the orders.

CSIS says nearly all Evergreen’s orders are with shipyards known to produce surface combatants for the Chinese navy.

Commercial satellite imagery of Jiangnan, a CSSC yard located at the mouth of the Yangtze near Shanghai, in February showed at least three ships for Evergreen under construction near the berth where China’s third aircraft carrier, the Type 003, is being built, CSIS said.

Evergreen told Al Jazeera that all its shipbuilding projects were subject to competitive international bidding with firms in Taiwan, South Korea and Japan also securing contracts for its commercial fleet.