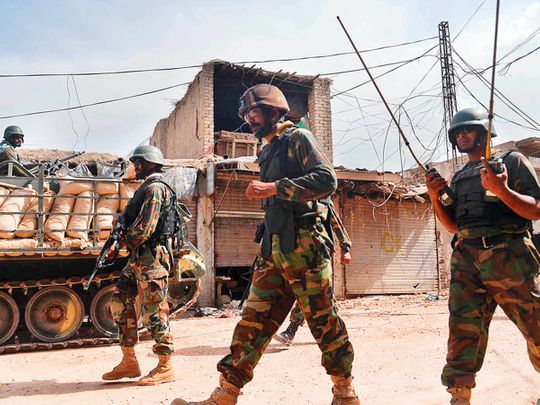 Four soldiers were killed in a suicide blast at a military convoy in the Mir Ali area of North Waziristan district in Khyber Pakhtunkhwa province, the military’s media affairs wing said on Tuesday.

The bomber rammed a three-wheeler into the convoy late on Monday in the remote district, police and intelligence officials said. The military statement said that the intelligence agencies have initiated investigations to find out details about the suicide bomber who carried out the attack and his handlers and facilitators. The army in its official statement vowed “to eliminate the menace of terrorism” and said that the sacrifices of the brave soldiers “will not go unpunished”. No one has claimed the responsibility for the bombing.

President Dr Arif Alvi has condemned the attack and expressed deep sorrow over the martyrdom of Pakistan Army soldiers. ”Such cowardly attacks cannot weaken our resolve to rid the country of the scourge of terrorism and all its manifestations” read the tweet by the president’s office. Prime Minister Shehbaz Sharif also condemned the bombing,

Attacks on security forces and clashes with terrorists have spiked in the North Waziristan tribal district in recent months.

The suicide bombing took place in Mir Ali town of North Waziristan district which borders Afghanistan. The region was once considered the hub of militant groups as Pakistan suffered serious fallout from the US-led war in Afghanistan that began in 2001 with the influx of millions of refugees and militant activities. However, Pakistan’s military operations since 2014 helped root out terrorist groups from the region.

The killing of four soldiers came a day after the killing of a senior commander of the militant group, Tehreek-e-Taliban Pakistan (TTP), Omar Khalid Khurasani in an explosion in the Paktika province of Afghanistan. Abdul Wali, also known as Omar Khalid Khorasani, was killed with three others, his driver and two of his close aides, local reports said. Khorasani was believed to be behind some of the deadliest terror attacks in Pakistan in recent years.