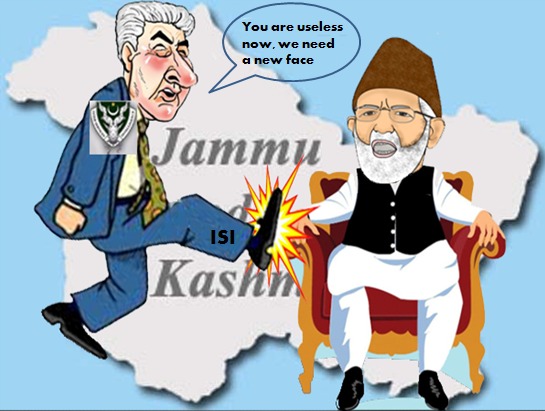 “Aaka” of separatism, motivator of terrorists and Pakistan ISI’s point-man in valley resigns after using innocent Kashmiris as cannon fodder to further Pakistan’s agenda. It is nothing but acceptance of his irrelevance after Modi government abrogated Article 370.

Facing flak from Pakistan-based groups for months, Hurriyat Conference’s lifelong chairman Syed Ali Shah Geelani resigned from his position giving out an audio message and a two-page letter. Geelani announced his departure from the hardline faction of the separatist outfit Hurriyat Conference in Kashmir. 91-year-old Geelani that he had decided to finally disassociate from the Hurriyat because of the current state of the outfit.  He has cited rebellion in the ranks as the reason for his decision to quit but it may take some time before the actual factors behind his resignation can be ascertained.

The Slayer of Kashmir

Geelani’s path to radicalization began in the early 90s after the exodus and ethnic cleansing of Kashmiri Pandits. In his younger days, Geelani was a teacher but was soon pulled towards the Jamaat. Since early 90s, Geelani began to preach that Kashmir’s independence was necessary to save Islam from Hindu India.  He drew closer to Pakistan and slowly emerged as the most hateful Jihadi voice against India in Kashmir. Geelani left no stone unturned to put more oil in the fire as the valley burned, by instigating mass violent protests and sparking a communal divide between Jammu and Kashmir.

Considered a hardliner among Hurriyat leaders, Geelani is best known for his calls for strike or hartal in the Kashmir Valley on one pretext or another. His rise as a separatist leader coincides with the rise of militancy in Kashmir through 1990s, when he formed his own outfit Tehreek-e-Hurriyat after parting ways with his mentor organization Jamaat-e-Islami.

Since 1990s, Geelani has been calling for hartal every time a militant is killed in encounter with security forces. Similarly, he has been giving calls for boycott of elections to the state assembly and the Lok Sabha. But his appeal has diminished in recent years.

In 2014, Geelani gave a poll boycott call but the people returned with over 65 percent voter turnout in the assembly election, thereby upsetting his controllers in Pakistan. He was often targeted by Pakistan-based groups and reports suggest the Pakistani establishment was not happy with Geelani.

In 2015, two years after having been elected as the Hurriyat chairman for the fourth time, Geelani was appointed as the lifetime chairman of the group.

In recent times, particularly after the Narendra Modi government revoked the special status of Jammu and Kashmir and turned it into two Union Territories – the other being Ladakh, Geelani lost trust of his Pakistani backers.

Fall of the slayer

Groups in Pakistan attacked Geelani for what they called his failure to respond to scrapping of Article 370 in Jammu and Kashmir, which ended its special status.

There has been a growing sense in the Pakistani establishment that with his advancing age and related ailments, Geelani was “of no use” to its Kashmir agenda. This became more evident after Union Home Minister Amit Shah last year declared that the government would not be talking to Geelani but to the “real people” of Kashmir.

Today, Geelani stands isolated and marginalized by his own ilk.

Geelani has finally realized his folly of supporting Pakistan and that Islamabad only pumped in weapons and drugs over years in Kashmir to destroy the local population. Pakistan seems to have dumped him on realizing that he is no more of use to them.

All Parties Hurriyat Conference (APHC) Azad Kashmir leaders conspired with ISI to takeover Hurriyet leadership from SAS Geelani after Geelani wrote a letter to Pakistan regarding the drugs issue. Geelani was asked to resign in the letter.

Now that Geelani has quit the Hurriyat Conference, the biggest separatist coalition in Kashmir Valley, the Union Territory is bound to see a new political dynamics emerging. Rumor has it that ISI was unhappy with him and wanted to replace him with a young, energetic man who could play up to be a good Pakistani stooge.

Geelani’s savage attack on his comrades in the Hurriyat comes amidst signs that the project he led is reaching its moment of final collapse. Earlier this year, Hurriyat leaders in Pakistan deposed his chosen nominee, Abdullah Gilani and elected a new shura, or consultative council. The son of Maulana Abdul Wali — a Baramulla cleric close to Geelani, and to his son, Nayeem Geelani — was sacked and replaced with Mohammad Husain Khateeb, even as both sides traded charges of financial misappropriation and incompetence.

The move to get him to resign was read as a signal from Pakistan’s Inter-Services Intelligence Directorate that it no longer trusted Geelani’s Hurriyat — and its armed wing, the Hizb-ul-Mujahideen — to stand at the vanguard of the jihad in Kashmir. While it may seem that Syed Ali Shah Geelani’s exit from Hurriyat will mark the sunset of the jihadist patriarch and likely collapse of the separatist alliance, but the stage being set behind the scenes should not be surprising for us, for it was Pakistan ISI’s plan since long to have him removed so that the cat’s paw can have another minion in the valley to play around with.