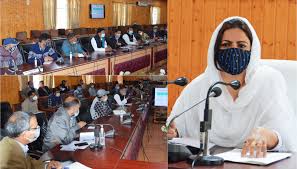 Triumphant part of Humanity: Visible Even During the Pandemic

In a gruesome account of the gap between Pakistan Occupied Kashmir(PoK) and J&K, this pandemic has a revelation, in the manner in which governance between India and Pakistan stands highlighted. While India has put the vaccination on a war footing, post-second wave wake-up call, and medical infrastructure spruced up, Pakistan Army and its stooge Imran Khan are busy delaying elections, to ensure win of PTI, since as on date, PoK residents have decided to not tolerate rigged elections again. This is after dumping COVID patients of mainland Pakistan in PoK,  and diverting all the ‘already meagre’ health care infrastructure out of PoK, leaving the Kashmiris, and Gilgit-Baltaistani people to fend for themselves(Chinese colonies which had healthcare infrastructures refused natives of PoK other than Pakistan Army Officers).

COVID Exposes the Stark Contrasts between Kashmir and PoK

In an evident contrast, administration and volunteers in Kashmir have taken sincere steps to handle COVID hardships in a professional manner, testing in multitudes of testing centres, distributing masks, medicines and food in far-flung areas, whereas residents of PoK are facing hardship and complete apathy from their government.

Be it the adequate supply of food materials or providing Personal Protective Equipment (PPE) kits to doctors and the paramedical staff in PoK, Pakistan is showing no concern, leaving the beleaguered people to suffer in silence and fear. Even the vaccines supplied by India has been consumed by the elite of Pakistan and its Army, and none reached the common man of Gilgit-Baltistan.

Pakistan’s government is vaccinating 50,000 people daily on average against the 0.42 million people daily target spelt out by WHO for Pakistan, while in PoK it is virtually Nil.

While India’s and Kashmir’s vaccination rate is unparalleled. Kashmir has been stocked up with oxygen supply, medicines and health care has been given an urgent ramp up. DRDO’s 500 bedded Covid Hospital has come up in Srinagar, Khonmoh in just 17 days. The hospital is centrally air-conditioned and has the capacity for 125 ICU beds. Out of 125 ICU beds, 25 are reserved for children and 375 beds have 24-hour oxygen connectivity.

While India prepares for the Third Wave, Kashmir is an integral part of the planning of Infrastructure. 26 oxygen plants were set up in J&K recently, 52 more to come up soon as told by the Financial Commissioner, Health and Medical Education Department, Jammu and Kashmir, Atal Dulloo. He also emphasised that twenty-six new oxygen generation plants were set up with a total capacity of 25,000 litres per minute in the union territory of Jammu and Kashmir recently as part of government efforts to increase oxygen supply in hospital.

The fact is that Pakistan and its Army has failed to even envisage such critical medical infrastructure needs, while they are busy either training terrorists or handing over fresh resources to China, after ensuring PTI stooges win Gilgit-Baltistan elections, of course fairly.

Kashmiris at the Forefront in all Avenues of Governance

Post DDC elections, the funds are no longer going to the elites, but to the development of districts themselves. Hence, not only the accountability is to the Central government, but also to the people of Kashmir directly.

During these months of Pandemic, the thriving democracy of Kashmir has been an eye-opener for the Kashmiri and Gilgit-Baltistani brethren, under occupation and exploitation by Pakistan and now China.

It is at the level, that if a Kashmiri councilor requests the Central Government, it carries promptness as is deserving for a Democracy and its representative, not like PoK sham elections,

where Pakistan Army’s stooges are just decorative pieces in the legislative assemblies there, lacking teeth, smile and even a compassionate heart for the local population

The newly elected councilors have been found to be having the independence to serve the people of Kashmir, and justify the faith Kashmiris had reposed in them. Many needy people were given dry ration, sanitizers, face masks, oximeters, and other relief material at all the locations in different districts, joined by prominent District Development Council (DDC) chairmen. They spearheaded the campaign to quell doubts in minds of Kashmiris on vaccination, and hence for people aged above 45 the vaccination percentage reached 70%, which is more than the national average.

Result Kashmir performed much more than the national average in terms of vaccination.

District Administration Ramban has established rural COVID Isolation Centres in 124 Panchayats of the district, while the rest were being covered on mission mode, said the Deputy Commissioner, Mussarat Islam.

The elected representatives have been on their feet interacting with their people and justifying their election. Its good to see in a thriving democracy in Kashmir, that to redress and resolve the irrigation problem faced by the people of Wahidpora Ganderbal and its adjoining areas, the DDC Chairperson Ganderbal, Nuzhat Ishfaq conducted an extensive tour of the village and took stock of irrigation facilities being provided to farmers through the Canal.

While the Elected governing bodies and Kashmiris have been working to serve their people, Central Government has been going on express mode, to get Kashmir and Kashmiris back on track of development.

With the view of uplifting the youth’s future, on  14 April 21 With the allocation of Rs 1,873 crore for the school and higher education sector in J&K in its 2021-22  budget, the Government is set to give a major boost to the infrastructural projects in the education sector. Ten-degree college buildings shall be completed at Banihal, Kupwara, Gool, Khilotran, Mahore, Kalakote, Hadipora, Singpora (Pattan) Villgam (Kupwara), and Paddar (Kishtwar).

Once India comes out of the Coronavirus induces lockdown, and the economy shall get moving, Kashmir needs to flex its economic muscles. Hence the road connectivity is being given much-needed impetus. Under Pradhan Mantri Gram Sadak Yojana (PMGSY) for the year 2021-22, the construction of new roads is likely to connect the new 150 habitations across the state with basic road facilities. The government has set a target to complete work on sixteen bridges. To improve the road connectivity and construction of bridges, the J&K government has also allocated Rs 4,089 crore as an annual budget during 2021-22 for the road and bridges sector of J&K.

A new facility has been constructed in Srinagar, having a parking capacity of 80 buses, 1312 cars, and 177 two-wheelers; 239 shops & dedicated space for restaurants & food courts. It shall be world-class, the moment foreign tourists start flocking the Paradise.

The local cottage industry is being supported in an unprecedented manner, wherein the Government of Jammu and Kashmir has approved a new Credit Card Scheme for providing a loan to Artisans/Weavers with interest subvention of 7% for five years. Something to overcome the slowdown and loss of income to Kashmiri artisans.

In addition, MoU has been signed under the ‘Samarth Programme’ to promote the online sale of genuine Handloom and Handicrafts products directly by Artisans/Weavers.

What is in striking contrast to PoK and even the rest of Pakistan, is the fact that local culture is being destroyed, to give way to radicalization. Locals there cannot express their culture and their own flavor of existence. Hence, the slowdown due to COVID is not being targeted, hoping the local industry dies in Gilgit Baltistan, ready to be replaced with Chinese Cheap goods.

All in all, what is strikingly wicked, is the irony that whereas Kashmiris in India have their business thriving, whereas Chinese cheap goods are being promoted in this pandemic, where all revenue is not even going in Pakistani coffers, but in the state-owned banks in China, with paltry kickbacks going in offshore accounts of Pakistan Army Generals.

While Kashmiris in India celebrate democracy and have the power of governance in their hands, how long it shall be, that Kashmiri, Gilgit, and Baltistan brethren in PoK continue to be subjugated by Pakistan and China. Hopefully, they are liberated before they are vanquished by the evil combine of the latter.