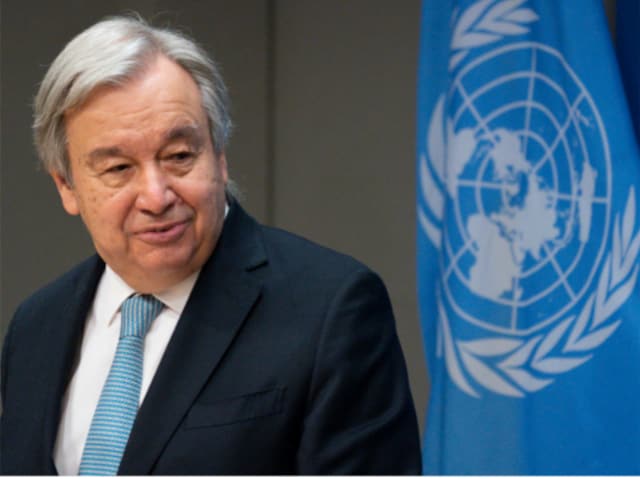 UN chief Antonio Guterres on Saturday exhorted the international community to step up efforts to help flood-ravaged Pakistan rebuild resilient communities and infrastructure to resist future disasters, while conceding “what the UN is doing in Pakistan is a drop in the ocean of what is needed.”

Secretary General Guterres made these remarks in Sukkur in Pakistan’s Sindh province, where he was visiting flood-hit areas.

Taking an aerial view of the flood-affected regions along with Prime Minister Shehbaz Sharif, the UN chief termed the flood devastation ‘unimaginable’.

Countries vulnerable to climate change, including Pakistan, must be supported to rebuild resilient communities and infrastructure to resist future disasters, Guterres said, as he rounded-off the two-day solidarity trip to the country.

He said that there needs to be a serious discussion on loss and damages as “what the UN is doing in Pakistan is a drop in the ocean of what is needed.”

“We are perfectly aware of our limited capacity and our resources. But you can absolutely be sure about one thing: we are in total solidarity with the Pakistani people, Geo TV quoted him as saying.

The UN chief said that he will ask the international community to ensure that they help Pakistan “now” while vowing to raise awareness about the disastrous situation, the report said.

Last week, the UN had launched an appeal for USD 160 million in aid for Pakistan.

In a tweet, the UNSG said developing nations were paying a “horrific price” for the world’s reliance on fossil fuels.

“Pakistan and other developing countries are paying a horrific price for the intransigence of big emitters that continue to bet on fossil fuels,” Guterres said.

“From Islamabad, I am issuing a global appeal: Stop the madness. Invest in renewable energy now. End the war with nature, he added. Guterres said on Friday that floods are estimated to have caused about USD 30 billion in economic losses to Pakistan.

He said that there was no memory of anything similar to what has happened with the impact of climate change in Pakistan and added the number of losses and victims was appalling.

Nearly 1,400 people have died in flooding that has inundated a third of the country, wiped-out crops and displaced more than 33 million.

“This is insanity, this is collective suicide,” Guterres told a news conference here.

The massive losses from the catastrophic monsoon rains and floods in Pakistan, the war in Ukraine and other factors may force it to slash its GDP growth rate for the financial year 2022-2023 from five per cent to three per cent, according to government estimates.