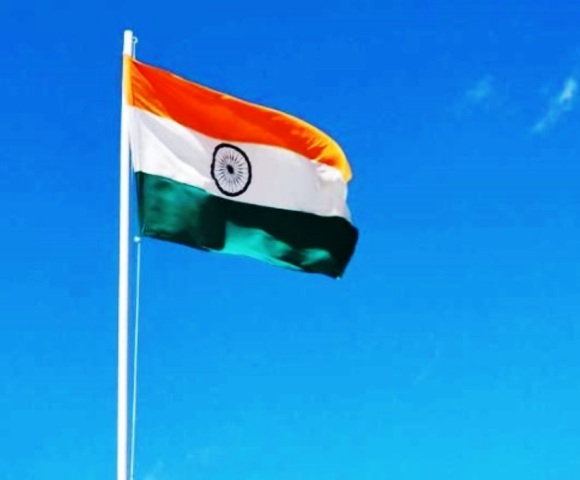 The preparations for hoisting Tricolour across the length and breadth of Jammu and Kashmir are going on in full swing with great enthusiasm and fervor shown by common citizens. Like other parts of the country, Har Ghar Tiranga campaign is being carried out across the nation so that the tricolour is hoisted at every house and office to mark India’s 75th year of Independence. As part of ‘Har Ghar Tiranga’ campaign under the aegis of ‘Azadi Ka Amrit Mahotsav’ initiative of the government celebrating 75 years of Independence, various activities are being conducted by different departments and schools in every district of J&K. Painting, National Anthem singing, essay competitions, quiz programmes, debates and seminars are being held in various Govt. Degree Colleges, schools besides, Tiranga Rallies, Flag hoisting on buildings as well as homes are also being held across the districts. The spirit of young generation are so high that they have started preparations for the event many days before with regular rehearsals. Students are proactively participating in various activities and events and are very excited to perform in upcoming Independence Day functions. The students are also taking part in quiz, essay, painting and debate competitions on varied topics of National Symbols, National Monuments, Freedom Struggle and other related topics. The Department of Rural Development, FCS&CA, MCs, Poshan Mission and Health are also organising awareness programmes, Tiranga Rallies, Flag Hoisting ceremonies, highlighting the importance of the celebrations. Similarly, other departments are also conducting programmes in order to spread the message of Har Ghar Tiranga campaign to all people. Flags have been distributed across all the district and Tiranga has been hoisted on many establishments, private buildings and residences across the district besides preparations are also in full swing for the Mega event of Har Ghar Tiranga between 13th-15th August this year. Rumysa Rafiq, Councillor, Khanabal Anantnag has asked the youth to take lead in HarGharTiranga campaign to show love for country. Similarly BDC Chairman Goudi Aarti Sharma says she is working closely with all departments, PRIs, social activists to make the #HarGharTiranga successful. Echoeing their views, a PRI member from Rajouri says every citizen of country is proud of our flag which reflects our oneness and secular character. It also reminds us of sacrifices by brave hearts for the nation. A resident of Bela Boniyar in north Kashmir’s Baramulla district stated that he is very happy with this decision of the government. Meanwhile Department of Information and Public Relations (DIPR) had launched the National Anthem Singing Competition -2022 for which entries were made open online between 1st August to 7th August, 2022. Under this competition, the government had called upon the citizens of Jammu and Kashmir to take part in the national anthem singing competition by submitting their entries through a google link. The entries were made open under individual and group categories. Under the individual category, people in two subcategories, 13-18 years and above 18 years of age were allowed to take part in the competition where as no age bar was kept for the group categories. Speaking on this initiative, Director Information and Public Relations, Akshay Labroo said “Under this competition around 9,000 entries having around 50, 000 participants were received from different parts of Jammu and Kashmir which is four times more than the entries received last year and almost equal submissions were received from both Jammu and Kashmir divisions”. He added that especially the districts of South Kashmir are leading and have given overwhelming response in the number of submission. The winners of the competition will get cash awards of Rs 25,000, Rs 11,000 and Rs 5,000 for first, second and third prizes respectively besides getting an opportunity to perform National Anthem at the Divisional level Independence Day celebrations. Meanwhile Jammu Administration is on its toes to make ‘Har Ghar Tiranga’ event a grand success as 3.5 lakh Tricolors will be hoisted from August 13 to 15 across the district. The preparations are in full swing to make ‘Har Ghar Tiranga’ a successful programme and the administration has to provide 3.5 lakh Tricolors to be hoisted atop every household, shops, government and private buildings between August 13-15, Avny Lavasa, Deputy Commissioner, Jammu, said. Avny said that as a part of ‘Azadi Ka Amrit Mahotsav’, this Independence Day, with hoisting of Tricolor, the national anthem will also resonate across.“ The Ministry of Culture and the Self Help Groups (SHGs) have also provided the National Flags to meet the target of hoisting 3.5 lakh flags in the district,” she added. “Moreover under the ‘Har Ghar Tiranga Abhiyan’, the flags are also being distributed through ration depots in Jammu city and peripheries”, the DC said.