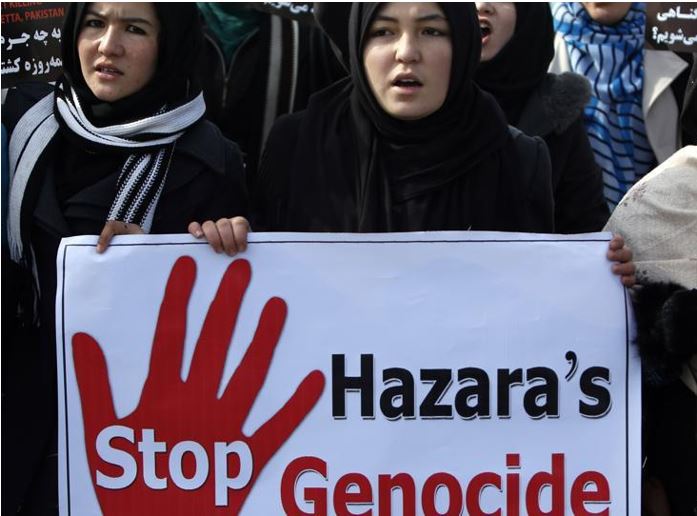 Talibanising the Taliban in the region yet again

In September 2019, ‘Stop Baloch Genocide’ poster campaign was organised at the Broken Chair monument area in Geneva, which coincided with the 42nd session of the UNHRC. This was participated in by Non-governmental organisations and civil society groups from Pak-occupied Kashmir(PoK), Balochistan and Sindh.

About a year later on, 11 coal miners working in the Mach area of Bolan district, about 100 km southeast of Quetta, the capital of the Pakistani province of Balochistan, were kidnapped and murdered on the night of January 2. All the deceased miners belonged to the Hazara caste of Shia Muslims, who are one amongst the many persecuted Muslim sects in Pakistan, other than minorities.

People in Skardu in Gilgit-Baltistan in Pakistan occupied-Kashmir (PoK) on Saturday organised a massive rally against the Pakistani army who are primarily being held responsible for the killing of 11 coal miners, belonging to the Shiite Hazara community, in a terror attack earlier this week.

Though the Islamic State: a tactical affiliate of Tehrik -e-Taliban(TTP) of Pakistan,  has taken responsibility for the terror act that took place on January 5, the locals of the place have blamed the Pakistan Army for the attack and condemned the Pakistan Army to use them to suppress all minorities and ethnic Baloch, into submission, for their game with the Chinese.

Is it that Pakistan Army and its Inter Services Intelligence (ISI) are brewing yet another cocktail of Sectarian rift, to have a leash on  the inevitable new Political Taliban in  Afghanistan, using its grasp on ISIS Khorsan Province (ISIS(KP)) and TTP, though both of the latter are now understood to be proxies of Pakistan Army.

In 2018, Hazara political representatives expressed willingness to join talks with the Afghan Taliban. Afghan Taliban’s appointment of a militiaman from the Hazara community as a local chief in northern Sar-i-Pul province appeared to indicate a political and ethnic change in its attitude toward the minority group, which it had persecuted for decades, on the teachings of Radical Islam by Pakistan Islamist Groups, at behest of Pakistan Army.

The choice of Hazara leader Mahdi was a clear message to the Hazara community, and all other groups in Afghanistan, that the Taliban are no longer against them, while pitching for a Federal Afghanistan Identity. Political Taliban was now striving to win the favor and support of all other groups of Afghans including minorities, a far cry from the Taliban of the 90s.

But, does it augurs well with the Radical Islamist manner of “divide and rule”, employed by Pakistan Army since decades, to keep the region especially Afghanistan’s progress in check?

Since 1990s, the preeminent terror organization operating in South Asia has been Lashkar-e-Taiba (LeT). While LeT’s literature speaks of global jihad, the organization has restricted itself to the task given by ISI and Pakistan Army to it, in Kashmir.

Despite the fact that LeT follows the Ahl al-Hadith interpretative tradition of Islam, which shares same curriculum that ISI fostered madrassas had taught to bring up the Taliban of the 90s. This same affinity was merged with al-Qaeda’s Salafist orientation, post 2010. Though LeT and al-Qaeda have not been organizational collaborators, but their fighters and training, post 2010, had been overlapping, thanks to their ISI handlers.

Here, since 2010, Taliban of Afghanistan was moving out of clutches of the Radicalized Islamic narrative of Pakistan Army, and started being more Afghan Nationalist. Seeing the grip on Taliban wavering, Pakistan Army courted ISIS since 2014, and by 2017 had TTP also in their grips, all up against Afghanistan Taliban’s philosophy of Afghan Identity.

Direct attacks on Afghan Taliban leaders, by the Pakistan Army’s directed attacks through ISIS(KP), did not deter Afghan Taliban, like Maulvi Mohammad Daud, who Afghan Taliban officials described as a member of the organization’s leaders’ council in Peshawar. He was reportedly travelling in a car in the city’s suburbs when he was gunned down by  ISIS terrorists in 2017 .

In the 2019-2020, the reconciliation of various communities with Taliban, including Hazaras, Taliban always denied that the appointment of the Hazara militiamen was a political gimmick(as charged by the baffled Pakistan). It was signalling a departure from its extremist and Radical Islamist stance in the region, towards Shias and attempts to gain humanistic legitimacy among other ethnic groups, including for the eyes of the world.

“We have clear targets such as an end to the occupation of Afghanistan and the establishment of an Islamic Emirate of Afghanistan. All ethnicity which accept these targets, are to enjoy equal rights in any future settlement,” Taliban political spokesman Suhail Shaheen had told a news channel then.

“What happened in the past should not prevent the parties from marching forward, an inclusive Afghan government after result-oriented intra-Afghan talks will better identify the country’s external, internal policies and role of minorities and their rights in the future setup,” he had said.

The change in the ideology and politics of the Taliban has been acknowledged by representatives of various sects including the Hazara, who all are tired of the war and for the sake of National Integration, appear to be willing to let bygones be bygones(of the Pakistan Army indoctrinated Radical Islamist persecution of Hazaras at the hands of Taliban in the 90s).

“We want an end to war and we want a democratic setup, under which all ethnic groups such as Pashtun, Hazara, Tajik, Uzbek and others enjoy freedom, unity and peace. We have high expectations that the imminent Afghan government-Taliban talks will yield tangible results this time,” said Asadullah Saadati, a senior politician from the Hezb-e-Wahdat party, the key vehicle of the Hazara community’s political presence.

This is contrary to Pakistan Army’s dream of ruling Afghanistan through a proxy like Taliban, and loot its resources along with China, as it is doing in Baluchistan, Occupied Kashmir and Pashtunistan.

Only way out is to break the bonhomie and remove ethnic identity, to replace with Radical Islamic narrative, forever dependent on Pakistan Army-Radical Islamist sphere of influence.

Afghan Collective of various sects and minorities in the region, including the susceptible Hazaras that also exist in Baluchistan region of Pakistan,  can be easily targeted by its ISIS and TTP terrorists then.

What bigger proof, of aiming to get Afghani Taliban and Hazara community leadership, on to their knees in front of Pakistan Army, that immediately after the dastardly attack by ISIS terrorists, a Afghan Shia leader Karim Khalili, of the Afghan Hezb-e-Wahdat-e-Islami political party, was forced to fly to Pakistan, to plead with Pakistani Foreign Minister Shah Mehmood Qureshi, to let minorities be kept away from Pakistan Army’s Radical Islamist fire.

ISI and Pakistan Army has repeatedly tried to target the Political Base of Afghanistan Taliban, and erode it, and to gradually replace it with the ISIS(KP) and it’s TTP leadership, including philosophy of Radical Islam, against regional identity of Afghanistan.

For that, Pakistan Army has to destroy the bonhomie that has fostered between various Afghan sects and groups, including the Hazara community. It shall continue to do so, unless minorities in Pakistan, Balochistan and all groups of Afghanistan, stand upto and defeat the Radical Islamist bid of Pakistan Army-China-Radical ISIS conglomerate.

Re-teaching the Taliban, to be the 90s Radical Islamist Taliban, and not a symbol of Afghan Unity,  is the ultimate aim of Pakistan Army. Thus this is all to eliminate ethnic identity of all groups in the region, and force all to be subservient to Pakistan Army’s Radical Islamist-Corruption theme of self-furtherance.