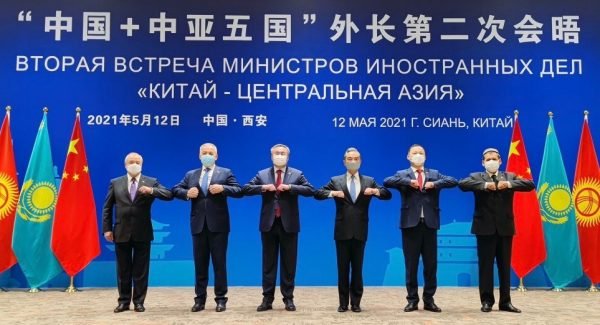 According to South China Morning Post, China has promised greater regional cooperation with Central Asian nations, including Kazakhstan, Kyrgyzstan, Tajikistan, Turkmenistan, and Uzbekistan in a meeting in Xian, in northwestern China’s Shaanxi province on May 12.

The same day, Beijing locked horns with western nations including the US, Germany, and the UK at the United Nations over alleged human rights violations of Uygurs in China’s far-western Xinjiang, which shares a border with Tajikistan, Kyrgyzstan, and Kazakhstan.

At the same time, an Australian think tank has blamed Chinese coercive measures for the declining population rates amongst Uighurs.

While the separatist sentiments amongst the native Muslim Uighurs had been building up since the 1990s in Xinjiang, the Chinese government has carried out a massive security crackdown in recent years along with installing a pervasive surveillance network.

The Human Rights Watch, a global rights body, claims China started building what it calls “concentration camps” in Xinjiang from 2017 onward. The year also saw the imposition of various restrictions on the Uighurs. These included prohibitions on veils and long beards, “extreme speech and behavior” and listening to public radio and television broadcasts.

Countering global criticism, China then said the camps are actually “education and training centers” meant for “people influenced by extremism”. Western governments saw it as a genocide in the making.

Over the years, few people have escaped and been able to tell their stories of alleged torture and abuse to the western audience. Based on these accounts, the US, European Union, the UK, and Canada imposed coordinated sanctions on China for the human rights abuses in March this year.

In wake of Beijing’s release of census data, the Australian Strategic Policy Institute (ASPI) reported on Wednesday that there has been an “unprecedented and precipitous drop in official birth rates in Xinjiang since 2017”.

The same think tank had found evidence of more than 380 “re-education camps” in Xinjiang in 2020, an increase of 40% over previous estimates.

Xinjiang’s Uyghur population rate rose faster than that of the Han, who constitute about 92% of the Chinese population, between 2010 and 2018. But from 2017 to 2019, the population nearly halved, right around the time the Chinese government started a campaign to control birth rates in the region.

ASPI linked these two phenomena and said that the population decline is a clear result of China’s coercive actions in the region. The report added, “Our analysis builds on previous work and provides compelling evidence that Chinese government policies in Xinjiang may constitute an act of genocide.”

China denies these allegations, claiming that the birth rate decline is due to improved health conditions and economic development in the region. In 2019, China claimed that Xinjiang has achieved an 8.5% average annual economic growth rate.

The US became the first country to call it a genocide based on reports and claims by human rights activists, non-governmental organizations, and academicians.

On January 19 this year, just before Trump was to step down from the presidency, his administration declared that China has committed “genocide and crimes against humanity.” Biden confirmed a similar line of thinking despite his legal advisors admitting there is insufficient evidence to prove genocide is being carried out.

The matter was taken up at the UN as well. On Wednesday, the US, the UK, and Germany hosted a virtual UN event on China’s Xinjiang. Despite China compelling countries “not to participate in this anti-China event,” about 50 countries attended the event.

Even keeping aside Xinjiang, China’s image isn’t spotless. Many blame it for the COVID-19 pandemic and smaller states are intimidated by its debt traps and its aggression in its neighborhood.

China has thus stepped up its efforts to project itself as a benevolent leader. During a multilateral meeting on May 12, China’s Foreign Minister Wang Yi offered to deepen regional cooperation with the Central Asian nations on Covid-19 vaccines and the development of Chinese-funded infrastructure projects. These are part of China’s two-pronged approach to improve its image.

Chinese COVID-19 vaccines have been shipped to more than 80 countries for sale or emergency use since December. Of these, 53 countries got the vaccines for free (such countries were mostly from the developing world, especially Africa and some were strategically important Asian countries such as the Philippines and Pakistan).

On May 11, China’s state-controlled newspaper Global Times stated that the country is filling up the global gap left by the US and India by increasing its vaccine production goal to 5 billion doses annually.

The newspaper has also drawn a comparison between China and the western countries that are prioritizing its domestic population calling it “China’s public good versus ‘America First’.” Currently, China has three vaccines in operation — Sinovac, Sinopharm, and Convidecia.

Similarly, China has been trying to fast-track its BRI projects. During the meeting with the Central Asian countries, China pledged cooperation on natural gas with Turkmenistan, a long-term economic and trade cooperation plan with Uzbekistan, high-quality development of belt and road projects with Kazakhstan, along with cooperation on medical infrastructure with Tajikistan and Kyrgyzstan.

But Beijing’s help comes with a price. In the meeting, Foreign Minister Wang emphasized the need to defend “non-interference in internal affairs” to which the other representatives said that they supported China’s efforts in “safeguarding national sovereignty and territorial integrity” and on the issue of Xinjiang.

Analysts told the South China Morning Post that China’s overtures to the Central Asian countries were also done to fortify its relations in the face of growing American influence in the area.