Imran Khan and the Generals 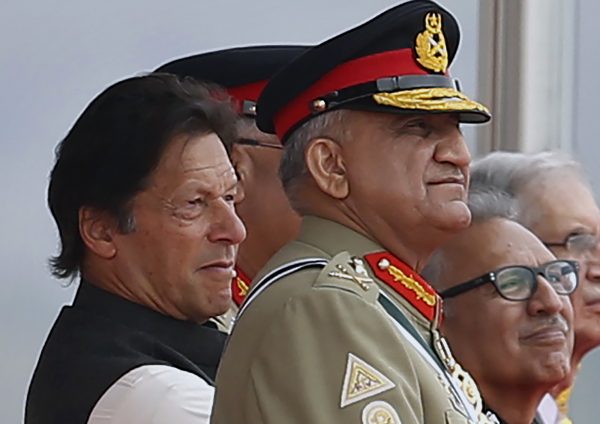 Imran Khan, Pakistan’s 22nd prime minister, may turn out to be the second in the country’s history to complete at least one full term. The first prime minister to do so was Zulfiqar Ali Bhutto(1972-77). Although the grapevine in the capital city, Islamabad, remains active with whispers foretelling the early end of Khan’s regime, a forced exit in the manner of his predecessors, who had lost the favor of the military, does not look likely. There is also talk of early elections, the possibility of which cannot be ruled out either.Whatever the future holds, it will not be about political forces contesting each other independently or any semblance of a democratic process. Instead, the politically powerful military will carve out an option that is convenient for it institutionally and suits its long-term interests.

Why Should Khan Go?

Disempowering the Parliament: The Case of the DCC

Khan’s willingness to play along with the military helped the institution shift its focus from the control of the government to a style of governance that would allow it to stay away from direct intervention without having to ever return to the proverbial barracks. The idea, which started during the tenure of Army Chief General Ashfaq Parvez Kiyani (2007-2013), aimed to create a favorable power equilibrium that the political opposition would not be able to disturb unless they came riding into power on the back of a popular political rebellion – which is not likely. A process of disempowering the National Assembly, Pakistan’sparliament, was started earlier because of the military’s manipulation and the lack of political parties able to checkmate the armed forces institutionally. The problem also lies with the nature of political parties, which Alfred Stepan would probably describe as having a “Sultans” nature. The concentration of power at the top and a weak political cadre force means a compromised ability to take a stand. This is obvious from some recent decisions, like the approval of the Finance Bill 2021, in which the two major military business networks were allowed tax exemptions. Currently, the PMI-N – which also voted in favor – does not even want to remind itself that the party initially taxed the Fauji Foundation and theArmy Welfare Trust in 1992. Focusing too much on dramatic moves like passing the 18thamendment, the PPP, PML-N, and other parties forgot to create institutional capacity to control the armed forces. This was obvious from the gradual weakening of the national security decision-making system that had been created during the 1970s by the Bhutto government. The Defense Committee of Cabinet (DCC), framed on the British model, empowered the parliament’s in national security decisions. Former Army Chief Mirza Aslam Beg’srecent’s book, “Compulsions of Power,” indicates the military’s discomfort with the DCC and its institutions; there has been a struggle since General Zia ul-Haq’s martial law to reverse the system in order to ensure equality of power between the military and civilian leadership. Musharraf introduced a system of strategic equivalence by forming the National Security Council. His predecessor, General Jahangir Karamat, resigned in 1998 when the thethen-Prime Minister Nawaz Sharif sharply challenged the army chief speaking about instituting the idea of the NSC. The late Benazir Bhutto and Nawaz Sharif agreed in the Charter of Democracy signed in 2007 to revert to the DCC system. The PPP government elected in 2008 brought the DCC system back, but could not make it work. There were no noticeable DCC meetings held. The system was allowed to go formally defunct under the PML-N government in 2013. It was replaced by the Cabinet Committee for National Security without any debate in the parliament. Later the nomenclature was changed again to theNational Security Committee (NSC) and its role was also revised from advisory to decision-making. The PML-N’s Sartaj Aziz was the first national security adviser and architect of the plan. It was a significant move as it gave full membership to the military’s four-four-star generals. The National Security Division (NSD) was meant to assist the NSC. It was designed with a policy planning wing, comparable to the India’sNational Security Advisory Board, responsible for coordinating debate on the subject by various public and private think tanks for the benefit of the NSC. The task of streamlining the national security community was achieved under Khan’s government when the NSD brought all public sector think tanks under its control. After 2018, for instance, the Islamabad Policy Research Institute(IPRI) was taken out of the control of the Ministry of Communication and placed under the NSD. After 2013, there was a proliferation of private think tanks that were mostly controlled by or included retired military personnel. The new structure also weakened parliamentary control of national security, as the NSC does not deal with arms procurement. Aziz writes in his book “Between Dreams and Realities” that arms purchases were left out because of the limited capacity of the parliament to debate the matter.

That the NSC system was forced on the government is obvious from two facts. First, despite underwriting the formation of the NSC, the Sharif government did not exhibit faith in the system. In his almost four years in office, Sharif only called nine NSC meetings, and the ones he did hold eventually became controversial with the story of the “Dawn leaks.” His successor, PML-N Prime Minister Shahid Khaqan Abbasi, by contrast, held 14meetings in less than a year. Imran Khan’s record of seven meetings to date is not impressive either. The political elite is not geared toward institutionalizing its relationship with the military, nor do army chiefs invest in strengthening institutional dialogue. According to data compiled by the Pakistan Institute of Legislative Development and Transparency (PILDAT), a private think tank, Nawaz Sharif held119 private meetings with the army chief, for which the minister of defense was present in 34 meetings and the NSA in 33. Khan, on the other hand, held 86 meetings with the army chief from 2018-2020 out of which the defense minister was present in only 16. Interestingly, the minister of defense attended five out of nine NSC meetings held by Sharif, seven out of 14 held by Abbasi, and six out of seven held by Khan. Second, the NSC system seems to be an artificial structure imposed from the top to subdue the parliament’s organic struggle to build institutional capacity. In 2008, a Parliamentary Committee on National Security was formed that until 2013 held 84 meetings. From 2008 to 2017-18, two separate standing committees on defense – in the Senate and National Assembly – were actively engaged and held 25 and 26 meetings, respectively. The matters debated during the meetings included important issues such as disclosure of agreements with the United States, the operation of the cantonment boards, the forced eviction of people in Balochistan and tribal areas, and incorrect placement of MilitaryLand & Cantonment service under a serving general. Khan’s parliament, however, seems to have taken a backseat on national security issues. Despite the presence of members from most political parties, the leaders and membership of these various committees lack the gravitas needed to challenge the military. then, which operates more closely with the army chief, has emerged as a bridge between the prime minister’s office and the military, but it also seems to have become more prominent than the NSC. Thanks to his willingness to let the military increase its clout with minimal resistance, Imran Khan’s relationship with the generals remains stable. From the military’s perspective, Khan’s tenure is necessary to shape the political system until the correct balance, as conceived by the army, is achieved. Predicting Pakistan’s political future in the midst of mounting external and internal chaos is tricky. But it can definitely be concluded that chaos and domestic pressure alone will not deter the army from its continued support of Khan. Some altering of the political balance may not be ruled out, but the ultimate criterion is the extent to which any such change legitimizes the power of the armed forces.