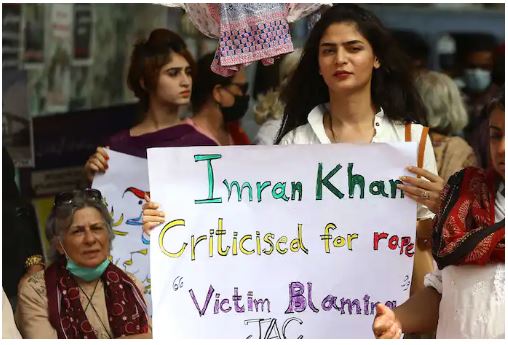 Mehreen Zahra-Malik is an editor and reporter based in Islamabad.

I was 6 years old when I had my first encounter with sexual violence.

I was out on a shopping trip with my mother and an aunt at a cacophonous stretch of stalls in the heart of Lahore, Pakistan’s cultural capital. For a brief, dizzying moment in the chaotic souk, I found myself alone on one side of a wall of orange silk rolled out by a shopkeeper, the silver beads and sequins on the fabric throwing off light like a thousand swirling disco globes. Strange hands were suddenly all over my body and my crotch. Then, just as suddenly, the cloth was lowered and the hands disappeared.

This is the first time I’ve ever put that episode into words.

In fact, I haven’t thought about it for years. But so many long-forgotten memories of unwanted touch have flared up for me and thousands of other Pakistani women since last week when, in an Axios interview, Pakistani Prime Minister Imran Khan insinuated a link between sexual violence and women wearing “very few clothes.”

Pakistan doesn’t have discos and nightclubs like the West, Khan explained. And it was going through a vertiginous social change — people were being exposed to more “X-rated” content in films, for example — that had given rise to temptations for which Pakistani men had few outlets: “So if you raise temptation in the society to the point, and all these young guys have nowhere to go, it has consequences.”

The uproar against the prime minister’s comments has been widespread. To an entire generation of Pakistani women, his words are nothing less than a betrayal that has made the scars we all carry so much deeper.

After Khan’s interview, a Twitter user called on Pakistani women to share what they were wearing when they were assaulted. One woman said she was 4 years old and wearing shalwar kameez, a long tunic and baggy trousers, for the Eid-al Fitr festival. Another wrote: “Scarf on my head and Quran in my hand. I was 10.”

Here’s a reality check: That child in the Lahore bazaar wasn’t dressed provocatively. Neither was 7-year-old Zainab Ansari, whose assaulted body was found in a garbage dumpster in 2018, triggering nationwide protests and prompting the passage of more stringent anti-rape legislation. The Karachi-based War Against Rape says about 40,000 cases of child sexual abuse were reported across Pakistan in the past decade — a figure the group calls the tip of the iceberg given that, by the prime minister’s own admission in his latest interview, only 1 percent of sex crime cases are reported to police.

The prime minister’s comments have angered Pakistani men also, with some asking Khan why he is perpetuating the myth that Pakistani men will be Pakistani men — which apparently equals that they will become uncontrollable predators when overwhelmed by sexual desire.

The prime minister is right about one thing: There is indeed a growing problem in Pakistani society. But it is not in the way women dress; it is rather in the way much of our society raises men in our homes, in what we teach them in school, in how we allow them to behave on the streets.

Since Khan’s remarks were aired, many close to him have come out to remind us how much his government cares about addressing sex crimes. It has passed stringent laws against rape. It has special police helplines. It has female lawmakers who do the hard work of ensuring survivors and victims have a better chance of receiving justice.

But sex crime rates have not declined. And how can they when the prime minister sends out the message that the burden of safety lies with women and girls, who are the victims of 95 percent of sexual violence, and not the state? The burden should lie with the police to make reporting sexual violence a more dignified process for women — one in which they don’t have to be subjected to humiliating virginity tests or asked to justify their sexual history. The burden must lie with investigators and courts to fast-track trials and increase the current conviction rate of 3 percent. The burden must lie with the government to ensure that potential perpetrators face consequences for touching 6-year-old girls in crowded bazaars.

Perhaps there is one blessing in this episode: that so many women are speaking up in what they see as a moment of solidarity, as a chance to set the record straight and an opportunity to share the weight of the pain they have suffered for so long.

But we are tired of carrying this weight alone. It’s time for men to step up and accept that they are at the root of both the problem and the solution for sexual crimes against women. It’s time for you, Prime Minister Imran Khan, to step up, too.