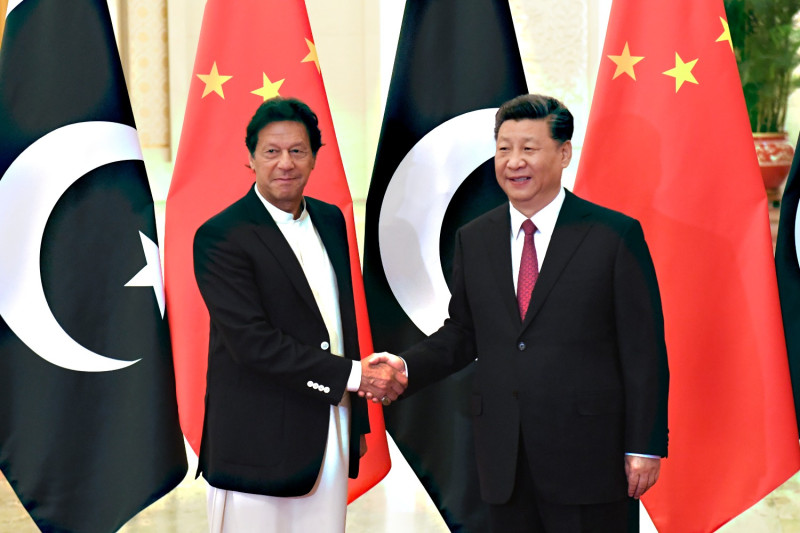 The Pakistani prime minister has said nothing on his ally China’s oppression of Islamic minorities.

In recent months, Pakistani Prime Minister Imran Khan has positioned himself as a fierce defender of Muslims worldwide. He criticized French President Emmanuel Macron for “encourag[ing] Islamophobia,” published an open letter to Facebook CEO Mark Zuckerberg asking that the platform ban Islamophobic content, and wrote another public missive calling on Muslim leaders to counter Islamophobia in non-Muslim countries. Khan has also insisted that he will never recognize the state of Israel until Palestinians receive a just settlement—despite the recent decisions made by four Muslim-majority nations to normalize relations with the Israelis, and despite international pressure to follow suit.

These are not surprising moves for Khan, who has emerged as a strong advocate for the global Muslim community. During his more than two decades as a political leader, and especially since becoming premier in 2018, he has repeatedly railed against Islamophobia and called for the establishment of a global coalition to combat it. He has also decried the abuses suffered by Muslim communities in Chechnya, Yemen, the Palestinian territories, and Kashmir. Additionally, Khan emphasizes the importance of Islam more broadly. He encourages Pakistanis to learn more about Islamic history, and in 2019 he joined forces with Turkish President Recep Tayyip Erdogan and then-Malaysian Prime Minister Mahathir Mohamad to plan the launch of a new English-language TV channel focused on Islam. He also hopes to transform Pakistan into an Islamic welfare state modeled on the holy state of Medina. Clearly, Khan views himself as a spokesperson for Muslim causes.

But Khan’s work in championing the world’s Muslims is undercut by his deafening silence on the oppression of the Uighur community in China.

The plight of the Uighurs is well known. About 10 million Uighurs live under state surveillance in Xinjiang, and since 2017, hundreds of thousands have been confined in internment centers. Today, at least 1 million are detained. They include the wives of Pakistani men—more than 200, according to one estimate

Inside these facilities, authorities seek to erase Uighurs’ Muslim identities. According to Rian Thum, a top scholar on the Uighurs, “they’re forcing people in the detention centers to say, ‘I’m not a Muslim.’” Former detainees say that Uighurs and other Muslims are made to eat pork on Fridays, a holy day for Muslims—and are harshly punished if they refuse.

Authorities have also targeted Uighurs’ faith outside the detention centers. Over the last few years, officials have banned fasting during the holy month of Ramadan and classified religious customs such as growing beards, wearing headscarves, and avoiding alcohol as “signs of extremism.” This crackdown on Islamic practice is broadening, with Hui Muslims and others in China now finding their traditions under attack. Islamophobia is rife—and tolerated—on the heavily censored Chinese internet.

Beijing has denied any wrongdoing, insisting that its policies toward Uighurs are curbing terrorism and extremism. It points to the Eastern Turkistan Islamic Movement and the Turkistan Islamic Party, terrorist groups founded by Uighur militants, as evidence—even though researchers believe that these groups pose limited threats to China.

When asked publicly about the Uighurs, Khan’s responses range from declaring he knows little about the issue to say he is discussing the matter privately with Beijing. In October 2020, one of his top advisors, Moeed Yusuf, went so far as to say that the government is “100 percent satisfied” that the situation was a “nonissue,” adding: “We have zero concerns, absolutely zero concerns.” (In a public conversation he had with me on Jan. 21, Yusuf clarified that it is a nonissue because it has been dealt with privately with Beijing.)

Some of Khan’s backers say he stays quiet because it is a strictly internal matter for China. But this hasn’t stopped him from weighing in on the plight of Muslims in Myanmar or, most recently, France.

The real reason for Khan’s silence is simple: China is arguably Pakistan’s closest ally, and Islamabad depends heavily on Beijing for economic and political support. Pakistan simply cannot afford to antagonize Beijing by calling it out.