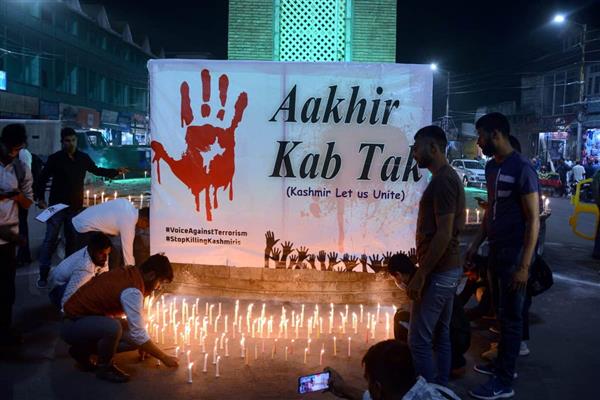 Kashmir witnessed nine target killings during the past 26 days including the killing of three policemen and six civilians — a Kashmiri Pandit employee, an artist, a wine shop salesman, a school teacher, a bank manager and a migrant laborer.On Thursday morning, a bank manager from Rajasthan, posted at the Elaqahi Dehati Bank in the Valley, was shot dead by terrorists in Kulgam village. The slain was identified as Vijay Kumar son of Om Prakash resident of Hanumangarh Rajasthan. He was working as Manager of Ellaquai Dehati Bank at Areh Mohanpora.Hours after banker’s killing, terrorists on Thursday shot dead a non- migrant labour and left another injured in Chadoora area of central Kashmir’s Budgam district.The slain labourer was identified as Dilkhush Kumar son of Narayan Reshi Dev resident of Purnia Bihar and Rajan from Punjab working in a Brick Kiln, at Magraypora Chadoora area of District Budgam.The targeted attacks comes within 24 hours o f a civilian, identified as Farooq Ahmad Sheikh, being shot at and injured in Pulwama on Wednesday night. He was fired upon by suspected terrorists in the Rakh-e-Chidren area of Pulwama. His condition, however, is stated to be stable.On May 25, terrorists shot dead a TV artiste outside her home in the Hushroo area of Chadoora in central Kashmir’s Budgam district. Her 10-year-old nephew was injured in the shooting.The slain was identified as Amreen Bhat D/o Khazir Mohd Bhat R/o Hushroo Chadoora at her home in Budgam.On May 24, a police constable was shot dead outside his house in the Soura area of Srinagar. His 7-year-old daughter was injured in the attack. He was identified as policeman Saifullah Qadri S/o Mohd Syed Qadri, R/o Malik Saab, in Soura (Anchar) area.On May 17, a 40-year man was killed, while three others were injured after terrorists hurled a grenade at a newly established wine shop in Baramulla.The deceased was identified as Ranjit Singh son of Kishan Lal resident of Bakra Rajouri.On May 13, a police constable Riyaz Ahmed Thokar was killed outside his residence in Gudroo area of south Kashmir’s Pulwama.On May 12, terrorists killed a government employee Rahul Bhat at his office in the Chadoora area of Budgam, sparking protests by the Kashmiri Pandit employees.On May 07, terrorists fired upon unarmed policeman Ct Gh Hassan near Ali Jan Road Zoonimar area of Srinagar.