In Pakistan, a tweet can bring a death sentence 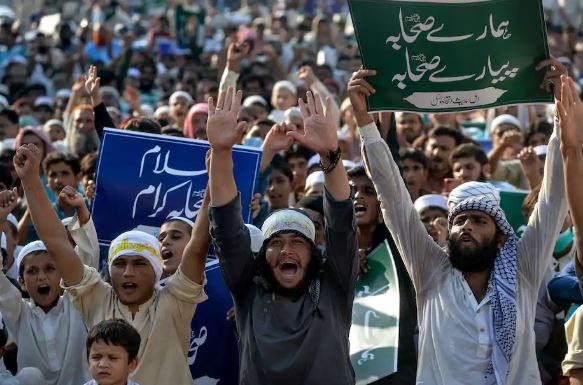 Marvi Sirmed is a Pakistani freelance journalist and human rights defender who previously served as a Special Correspondent for the Daily Times, an English-language newspaper in Pakistan.

Last month, I sent a tweet — intended as a commentary on Pakistan’s problem of political abductions — that sparked a violent backlash of gender-based slurs, slut-shaming and death threats. By the next day, #ArrestMarviSirmed_295C became the top trending Twitter hashtag in my country, with countless people suggesting my extrajudicial murder. They took their inspiration from Pakistan’s controversial blasphemy laws. (Section 295-C makes it a criminal offense to use derogatory remarks about the Holy Prophet.) The hatred and calls for violence sent me into hiding, fearing that vigilantes might take matters into their own hands. The mere accusation of blasphemy has become a license to kill in most of the Muslim world, particularly in Pakistan.

As an activist and journalist, I often speak about issues that my country’s powerful military establishment does not want aired. This time, I tweeted satirically about the rising enforced disappearances in Pakistan, specifically referencing the Baloch people, an ethnic minority that has been facing state persecution for decades: “An Islamic clergyman was describing to his followers that Hazrat Eesa [Jesus Christ, as used by Muslims] did not die, he was actually picked by the Almighty. One simpleton follower asked, was he, too, a Baloch?”Over the past 18 years, Pakistan’s military has consolidated its control over almost every aspect of Balochistan’s society, politics and governance. People there face intense oppression on suspicion of dissent. Anyone like me, who publicly criticizes the military or government, may find themselves targeted by blasphemy charges — which could mean assassination.

India’s colonial-era blasphemy law was originally designed to protect the minority community following demands from the Muslim minority community for legal protection in the wake of offensive literature published in the 1920s. After Pakistan gained independence in 1947, however, the authorities increasingly used the law to target minorities and critics of government policy. At least 18 people convicted of blasphemy currently sit on death row in Pakistan, while another 19 are serving life sentences. More than 70 people have been killed before they could appear for trial. During one 30-day stretch in July and August, 42 cases of blasphemy were registered across the country. During the most recent spike in blasphemy accusations, a powerful coalition of clerics filed dozens of blasphemy complaints against several individuals from the minority Shiite Muslim community. This is unprecedented.

While the numbers of those charged with blasphemy continue to increase, blasphemy vigilantism is not only encouraged but celebrated. Mumtaz Qadri, who killed Punjab governor Salmaan Taseer in 2011, became a kind of national hero. Leaders of the mob that lynched blasphemy-accused student Mashal Khan in 2017 were celebrated by politicians from opposition parties and defended by the provincial ruling party. Faisal Khan, the teenager who murdered U.S. citizen Tahir Naseem in the courtroom while he was standing trial for blasphemy in July, became a hero overnight and received public accolades. Judges, lawyers, politicians, law enforcement officials, professors and human rights defenders all operate in an environment of fear, knowing they could be targeted next.While the prospects of any Pakistani politician amending or repealing the blasphemy law seem slim, the Pakistani state needs to be pressured through the power of the purse. The United States remains Pakistan’s top donor, believing the country to be a partner in combating violent extremism and furthering democracy throughout the region — yet it continues to tolerate blasphemy vigilantism that has fueled terrorist attacks all over the world. Aid should be suspended until the Pakistani government, which is in dire financial straits, fulfills its commitment to clamp down on radicalism. The thought of losing financial assistance from the World Bank and International Monetary Fund, among others, has previously forced the Pakistani government to make positive changes.

Social media platforms must also ensure that the protection of online expression conforms to international human rights standards. In the past, the Pakistani government has attempted to unilaterally change licensing rules for social media sites to operate in the country, but there must be a global commitment to reject such blackmail.

Finally, liberal democratic countries should employ the United Nations’ strategic framework to counter violent extremism and counterterrorism. This must include actions to curb anti-blasphemy vigilantism. The lives of civil rights activists and human rights defenders like me depend upon this protection. As I’ve learned, along with many others in my country, a simple tweet can mean a death sentence.