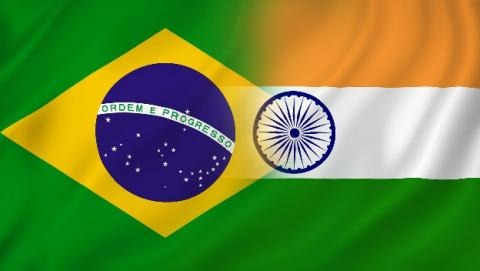 India became the 5th largest trading partner of Brazil in 2021. The bilateral trade chain exceeded US$ 11 billion, an increase of 63% compared to 2020, and a significant difference from the level observed since 2015 informed the Embassy of India, Brazil in a tweet.

In 2019, India was Brazil’s 7th largest import source country and 18th largest export destination. During the Covid-19 pandemic, the significance of the Indo-Brazilian bilateral relations has been highlighted, especially in the pharmaceutical sector. According to data from the Ministry of Economy of Brazil for 2020, pharmaceutical products correspond to almost 30% of India’s exports to the country.

Due to the latest interactions held between the two countries, bilateral relations have gained more relevance, with both governments showing political interest in coming closer together. This became evident after  Prime Minister Narendra Modi extended the invitation to the Brazilian President Jair Bolsonaro as a chief guest in the celebration of India’s 71st Republic Day in 2020.

In 2018-19, bilateral trade between India and Brazil was at US$ 8.2 billion. This included US$ 3.8 billion as Indian exports to Brazil and US$ 4.4 million as imports by India from Brazil. Significant Indian exports to Brazil include pharmaceuticals, agrochemical, auto components and parts, synthetic yarns, and petroleum products. Brazilian exports to India include vegetable oil, crude oil, gold, sugar, and bulk mineral and ores.

Both countries share a close and multifaceted relationship that is based on shared democratic values and convergence of views on many international issues. The two nations cooperate not only bilaterally but also at plurilateral fora such as BRICS, IBSA, G-20 and in multilateral bodies such as the UN and WTO, among others. India-Brazil relations were elevated to a Strategic Partnership in 2006, thereby heralding a new phase in bilateral ties.

Brazil and India have signed a bilateral ‘Defence Cooperation Agreement’ in 2003 that calls for cooperation in defence-related matters, especially in the field of Research and Development, acquisition and logistic support between the two nations. Under the framework, a Joint Defence Committee (JDC) has been set up that meets at regular intervals.