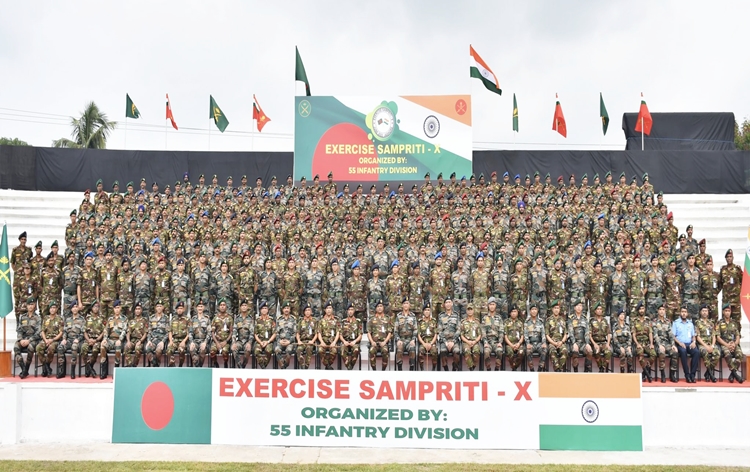 The 10th edition of the Joint Military Exercise ‘Sampriti’ between the Armies of India and Bangladesh commenced on Monday, 5th June at Jeshore in Bangladesh. The exercise being conducted between June 5-16 will focus on joint counter terrorism, counter insurgency operations, humanitarian assistance and disaster relief operation.

The exercise was inaugurated by General Officer Commanding (GOC) 55 Infantry Division and Area Commander Jessore Area Major General Md. Nurul Anwar. The Indian side is being led by Brigadier General Rupesh Shehgal of the Indian Army in the exercise.

India and Bangladesh have been conducting the bilateral exercise since 2010. It is an important bilateral military exercise to strengthen cooperation between the two countries. The exercise will be conducted as Command Post Exercise (CPX) and Field Training Exercise (FTX). Twenty officers from both the countries are participating in the Command Post Exercise (CPX) and 12 officers, 9 junior commissioned officers and 129 soldiers of other ranks are participating in the field training company Exercise (FTX), said a press release issued by the Bangladesh ISPR.

During the exercise, apart from the operational activities, a number of sports and social interactions will also be organised.