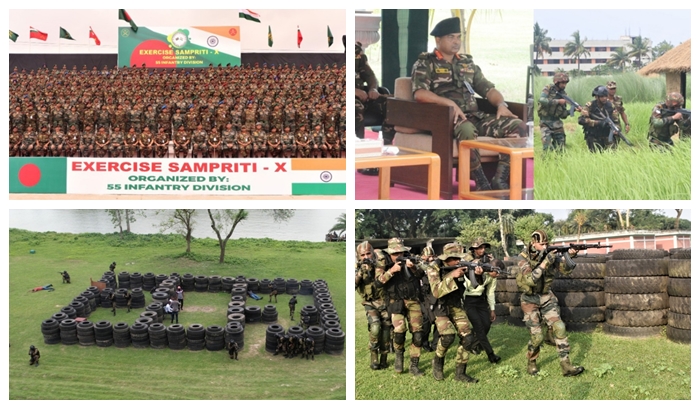 The 12-day long joint military exercise between India and Bangladesh ‘Sampriti’ culminated after a validation exercise at Jashore in Bangladesh. Chief of General Staff of Bangladesh Army, GOC 55 Division and GOC 20 Mountain Division of Indian Army were present during the closing ceremony.

The joint military exercise, which started on 5th of June, was focussed on creating capabilities in humanitarian assistance and disaster relief as well as counter-terrorism operations and the UN Peace Keeping operations.

Both the Armies learnt from the best practices of each other during the exercise. The joint exercise resulted in better understanding and enhancing interoperability between both the Armies. The exercise between the Armies of the two countries further strengthened the relationship between India and Bangladesh, said the Indian Army.

India and Bangladesh have been conducting the bilateral exercise since 2010. It is an important bilateral military exercise to strengthen cooperation between the two countries. The exercise was conducted as Command Post Exercise (CPX) and Field Training Exercise (FTX). More than hundred and fifty officers of various ranks  took part in the exercise.

During the exercise, apart from the operational activities, a number of sports and social interactions were also organised.