India, US reaffirm their commitment to promote regional stability and rule of law at fourth 2 plus 2 Ministerial Dialogue 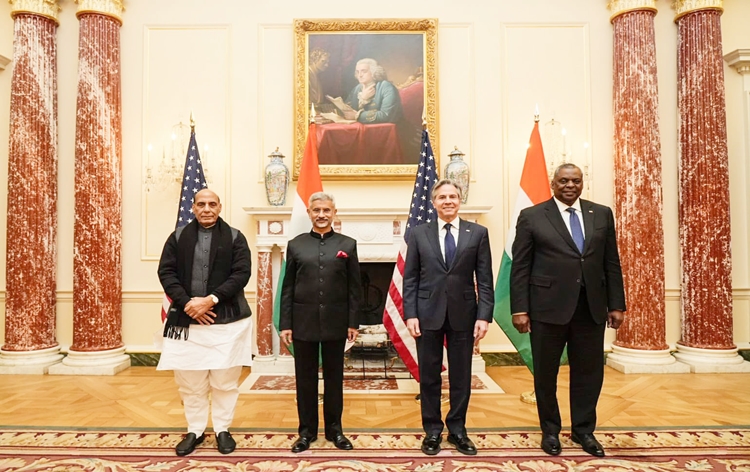 India and US the reaffirmed commitment to promote regional stability and rule of law at the fourth 2 plus 2 Ministerial Dialogue held in Washington last night. Defence Minister Rajnath Singh and External Affairs Minister Dr S Jaishankar led the Indian delegation. The US delegation was led by Secretary of State Antony Blinken and Secretary of Defense Lloyd Austin.

The dialogue enabled both sides to undertake a comprehensive review of cross-cutting issues in the India-US bilateral agenda related to Foreign Policy, Defense and Security. Addressing the media after the talks, Defence Minister Rajnath Singh thanked both the Secretaries and delegation for a great interaction and appreciated their commitment to India US bilateral relations. He said they had a meaningful talk which will help in maintaining and expanding India-US momentum.

He said both nations have shared goals to achieve and it is great that the world’s two biggest democracies share same views on almost all world issues. During the meeting, they also discussed assessments of the Indian Ocean region and its neighbours.

The Defence Minister said they also discussed about terrorism being used as an instrument of statecraft against India. He said India’s Department of Space and the US’s Dept of Defence have finished a ‘Space Situational Awareness’ agreement.

An agreement on Defence Space and Defence Artificial Intelligence dialogues has also been reached. He added that many other initiatives and agreements which are in the discussion phase have been agreed to be expanded for progress in the scope and depth of India – US military engagements.

The Defence Minister said that despite the pandemic, India-Central US military to military exercises increased. Mr Singh said both nations also talked about further cooperation in the defence cyber and special forces field, including LEMOA, Logistics Exchange Memorandum of Agreement.

In his address to the media, External Affairs Minister Dr S Jaishankar said the meeting took place at a time when the global audience is facing multiple challenges and stresses. He said a good part of his meeting with Secretary Blinken went to the ongoing conflict in Ukraine that has many ramifications.

He pointed out that even countries far away are worrying about energy and food security, commodity prices and logistics disruption. The External Affairs Minister stated that India buys some energy from Russia necessary for its energy security. He however added that India’s purchases for the month would be less than what Europe does in an afternoon.

US Secretary of State Antony Blinken said India has to make its own decisions about how it approaches the Ukraine challenge. He said it is important that all countries, especially those with leverage, press Russian President Vladimir Putin to end war.