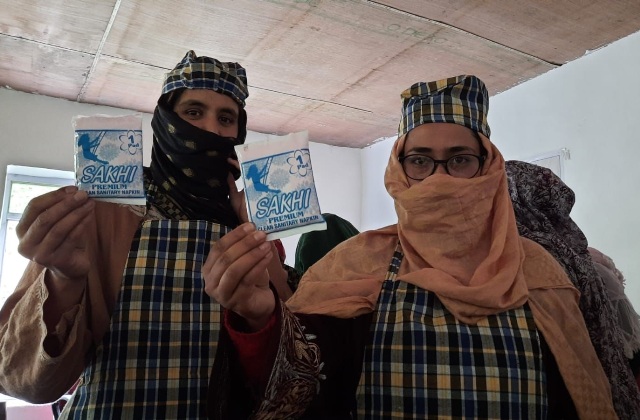 In the border villages of North Kashmir’s Kupwara district, close to the Line of Control, the Indian Army has started various initiatives to empower women in the area.

Dozens of women in the remote village of Dudi Macchil in the district, are being trained to make sanitary pads. The Indian Army and an NGO have set up a sanitary pad manufacturing unit there. These sanitary pads are fully biodegradable and are made on machines with simple technology which women can learn to operate very quickly.

‘A comprehensive training was organised for women from the village who were trained in manufacturing pads  as well as maintenance of the machines. Women actively took part in the training and started the production of sanitary pads successfully. These pads will be used by the schoolgirls from Government Higher Secondary School, Dudi and Army Goodwill School, Raghavan, ” said Brigadier Vinod Singh Negi, Indian Army, Maccchil.

The Indian Army and the NGO also installed sanitary pad vending machines and incinerators (a furnace for burning waste) in these schools. The women of the area will make a livelihood as per the daily production. This project will promote menstrual health awareness and hygiene in the region as well.

Separately, the women were also given sewing machines as part of the skill development program. They will be trained in tailoring for which, raw material would be provided to them.

The women of this remote village are extremely happy and thankful for the setting up of the unit. ” Such initiatives will empower us and we will also be able to earn a livelihood. We are thankful to the Indian Army for such initiatives. The women living in the border areas require such initiatives immensely,” said Zubina, a beneficiary.

The Indian Army plans to replicate the same initiatives in other villages of the bordering areas as well.