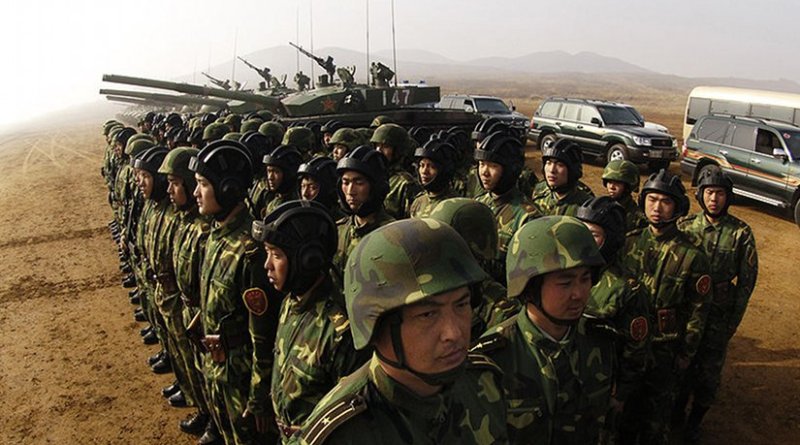 Pertinent to quote from this Paper was my major observation that: “It is symptomatic of the Chinese brinkmanship at display and portends that while China may not opt for an armed conflict with USA, it will however keep resorting to brinkmanship, keep confronting USA strategically and wear down the United States resolve to continue to be committed to the defence and security of the Asia Pacific and Taiwan in particular.”

In 2021, China’s military brinkmanship against the United States. Japan, India and in South China Sea has reached unprecedented provocatively high-levels which should be a “Wake-up Call” for political leadership and military planners in Washington and all Indo Pacific capitals. This arises from simple strategic logic that any major armed conflict between China and United States will leave no space for any “Fence Sitting” by Asian capitals, notably ASEAN capitals.

China has arrived at this wild ‘Global Threat’ stage by acts of omission and commission of United States geopolitical and strategic policies in the first two decades of the 21st Century. The United States was grossly oblivious to China’s military buildup in the decade upto 2010 militarily distracted by its ‘Wars of Choice’ in Iraq and Afghanistan.  China without any US checkmating built up its formidable military machine especially Navy, Missiles Force and Force Projection Forces.

This national impulse of China received a ‘booster dose’ with Chinese President Xi Jinping assuming complete control of all military levers of power in China. It also fitted-in with his grandiose “Great China Dream”.

China’s marked climb-up on the military escalation ladder has zoomed up under what seems as the megalomaniac leadership of President Xi Jinping where China is in conflict on all its peripheries from Taiwan to India.

Undoubtedly, China therefore has enveloped Indo Pacific Asia in the blanket of Cold War 2.0 and the portents in 2021 seriously point towards a possible World War III if China does not push bank from the brink on its own volition or forced by the growing coalitions against China by US-led QUAD and AUKUS.

The Indo Pacific Theatre in 2021 thus already has emerged as the theatre of the ongoing Cold War III. It also needs to be highlighted that while Cold War 1.0 ended in 1991 with the dissolution of the Former Soviet Union and the dismantlement of Warsaw Pact Forces confronting NATO Forces in Central Europe, Cold War 1.0 continued in the Asia Pacific.

Communist China replaced the Former Soviet Union as the main protagonist in the Asia Pacific, now Indo Pacific. Unlike Central Europe where the NATO and Warsaw Pact Forces confrontation manifested in congealed lines of fortifications on the rolling plains of Central Europe, that visibility in Indo Pacific is denied by geography as the confrontations today between China and United States & its Allies are basically on the seas of Western Pacific, and specifically in the hotly contested South China Sea.

In terms of line-up of opposing military and naval forces in Cold War III, China is virtually alone with the exception of the nuclear proxies it has created in Pakistan and North Korea. Opposing them are the United States and its Allies like Japan and South Korea tied with defence treaties. Strategic partners like India under intense Chinese military confrontation for decades and more pointedly since April 2020 is now actively involved in QUAD.

China stands emboldened in its Cold War III confrontations secure in the belief that the Russia–China Strategic Nexus is available as a back-up. But I have my doubts whether Russia would stand by China in a full-fledged war with the United States. Russia can be expected to make all the right geopolitical noises in support of China but it is debatable whether China would see Russian Military Forces fighting on its side. It would be disastrous for Russia.

With China hyperactive in its Cold War 2.0 military confrontations and provocative military provocations all across the Indo Pacific Region from Japan to India and Australia the next pertinent question that arises is that whether China can succumb to the temptation of igniting World War III on its own volition or by misperceptions of United States lack of r resolve to militarily challenge China’s aggressive impulses of a ‘Revisionist Power’.

By all rational geopolitical co-relation of balance of power and all rational strategic logic of China bereft of “Natural Allies’ , China should rationally not even harbour the remotest ideas that it can worst the United States and its Allies, with NATO also now seized with the China Threat, in any World War III conflagration.

Chinese economy has already slowed down and likely to go down further. In my 2001 Paper quoted above I had asserted that: “Minus United States involvement in China’s economy, China’s economic growth could go into a downslide. China therefore is not in a viable position to sustain a ‘Second Cold War’ that it has sought to generate in Asia Pacific”.

The United States has been in the process of ‘decoupling” its trade relations and involvement in the Chinese economy and the US-China Trade Wars begun by Former President Trump can only intensify in direct proportion to China’s unrestrained belligerence.

Concluding, it needs to be emphasised that global security and stability dynamics today resemble Europe on the eve of World War II when Hitler was on the rampage on Germany’s peripheries and the Western Powers were in abject appeasement of Hitler. World War II could have been averted if Western Nations had forsaken ‘Risk Aversion’ policies and the United States had intervened in 1939 only.

United States & Allies and its strategic partners like India can ill-afford to repeat 1939 in 2021.  Communist China as a ‘Revisionist Nation” reminiscent of Hitlerian Germany has flung defiantly its military gauntlet at the United States from the Western Pacific to the Western and Southern confines of the Indian Ocean challenging global security and stability.  It is high time that Communist China is checkmated and “Contained” before it pushes the ‘Free World’ into a possible World War III.