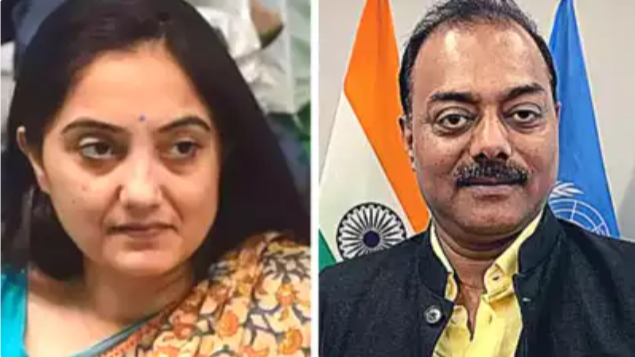 Iran is the latest after Kuwait, Qatar and Pakistan to denounce the recent statements made by two BJP leaders on Prophet Muhammad. The Indian envoys in Iran, Kuwait and Qatar were summoned and have explained that the views expressed belong to ‘fringe elements’ and do not reflect the views of the Government of India.

Iran’s Ministry of Foreign Affairs summoned the Indian Ambassador to Tehran over the controversial remarks. During the meeting, the Indian envoy “expressed regret and said any insult against Prophet of Islam is unacceptable and this doesn’t reflect the position of Indian government, which has shown utmost respect for all religions.”

The Indian Ambassador said the offender [Jindal] had no position in the government and has been dismissed from the party after making those remarks.

This comes ahead of the Iranian Foreign Minister’s first-ever trip to New Delhi next week.

Pakistan Prime Minister Shehbaz Sharif took to Twitter on Sunday to condemn the remarks.He wrote, “I condemn in strongest possible words hurtful comments of India’s BJP leader about our beloved Prophet (PBUH). Have said it repeatedly India under Modi is trampling religious freedoms & persecuting Muslims. World should take note & severely reprimand India. Our love for the Holy Prophet (PBUH) is supreme. All Muslims can sacrifice their life for the Love & Respect of their Holy Prophet (PBUH).”\

Qatar’s foreign affairs ministry summoned the Indian ambassador and handed him an official note stating Qatar’s total rejection and condemnation of the remarks by an official in the ruling party in India against Prophet Muhammad.

The note indicated that more than two billion Muslims across the world follow the guidance of Prophet Muhammad, adding that these insulting remarks would lead to incitement of religious hatred.

In response to a media query regarding statement issued by Qatar foreign ministry, the spokesperson of the India Embassy in Qatar said, “Ambassador had a meeting in the Foreign Office in which concerns were raised with regard to some offensive tweets by individuals in India denigrating religious personality.”

“Ambassador conveyed that the tweets do not, in any manner, reflect the views of the Government of India. These are the views of fringe elements,” the statement added.

Kuwait denounced “the statements made by an official in the ruling party against the Holy Prophet”, the country’s foreign office said in a tweet in Arabic, and summoned the ambassador, Sibi George.

“The State of Kuwait summons the Ambassador of the Republic of India and hands him a protest note in which it completely rejects and denounces the statements made by an official in the ruling party against the Holy Prophet, peace and blessings be upon him,” the tweet read.

“Vested interests that are against India-Kuwait relations have been inciting the people using these derogatory comments. We should work together against such mischievous elements who aim to undercut the strength of our bilateral ties,” it said.

On Sunday, the BJP high command suspended Nupur Sharma and expelled Naveen Jindal from primary membership of the party. Cases have also been registered against Nupur Sharma for hurting religious sentiments in Hyderabad, Pune and Mumbai.

Earlier this week, violence had broken out in Kanpur in Uttar Pradesh after a Muslim organisation gave a call to shut shops in Parade Market over the remarks made by Nupur Sharma. At least 40 people, including 20 police personnel, were injured during the clashes, the police said.