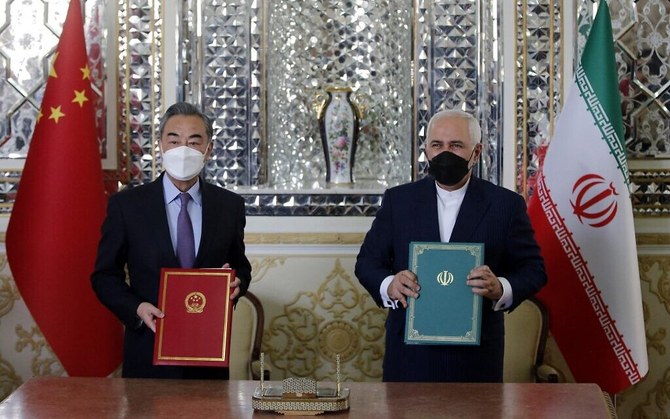 The “comprehensive” 25-year Iran-China Strategic Cooperation Agreement has once again generated controversy in Iran, leading to more tensions between supporters and opponents. This is the third widespread public argument since it was first proposed six years ago. Despite only being finalized in 2021, the agreement itself is nothing new, with this periodic anger emerging occasionally and just as quickly disappearing. It is possible that the nuclear talks between Iran and its P5+1 partners in the US and Europe are among the major factors leading to the rise in tensions and to domestic criticisms periodically leveled at the agreement.
The agreement was first proposed in 2016 during the visit of Chinese President Xi Jinping to Iran. But it did not enter into force at the time. Since the proposal was a reaction to the signing of the 2015 nuclear deal and of Iran’s openness to Western investments, there was no need for the deal to actually take effect. It once again came to the fore in late 2020 as a result of the dangerous consequences created by the US withdrawal from its deal with Iran under President Donald Trump, when his successor Joe Biden assumed the presidency. In March 2021, the Chinese foreign minister, and his Iranian counterpart, Javad Zarif, under the government of Hassan Rouhani, signed the deal in Tehran, although they stopped short of publishing the agreement’s full text or provisions, some of its terms were leaked to the media. Despite this, the agreement still has not entered into force up to the current day as the Iranian parliament has not ratified or seriously debated it.
In January 2022, Iranian Foreign Minister Hossein Amir-Abdollahian and his Chinese counterpart Wang Yi met in China and announced that the deal had indeed entered into force. This surprising announcement was followed by a statement from Iranian Parliament Speaker Mohammed Bagher Ghalibaf, who asserted that there could be no implementation of the agreement unless parliament approved it. Meanwhile, Iranian lawmaker Abbas Gorlu told the Tasnim news agency that the 25-year comprehensive partnership agreement between Iran and China is merely a memorandum of understanding and a framework for joint cooperation and that no binding deal or agreement has been concluded between the two countries so far. This was a reiteration of Ghalibaf’s comments during a parliamentary session on April 4, 2021, in which he described the deal as a general roadmap, meaning it is nonbinding for both sides, and this had been agreed on for the time being.
The 18 pages of the agreement leaked to Iranian media outlets last year — perhaps deliberately — reveal cooperation between the two countries in long-term economic, security and military fields valued at $400 billion over 25 years. China neither confirmed nor denied the leak. Asked by The Diplomat, an international online magazine, about the details, the Chinese Foreign Ministry spokesman, Zhao Lijian, said the agreement was a plan to take advantage of the potential economic and cultural cooperation between the two countries and chart a course for long-term cooperation, adding that it did not include any specific contracts or objectives.
There may well be significant economic, political and strategic gains for China and Iran if they take serious steps toward implementing the provisions of the leaked agreement, although we lack room here to analyze these satisfactorily. On the other hand, however, it is Iran, not China, that is currently facing serious challenges and dangers as a result of the deal. To name a few, there are well-founded concerns about the potential for subordination of Iranian interests, not to mention the hegemony of a foreign power over the country’s sensitive sectors, or even the possibility that Iran may fall into a trap of Chinese debts. There are the main objections domestically to moving ahead with the agreement — given the current, already growing Chinese economic hegemony over many emerging economies presently through the back door of trade and investment. In addition to this, while $400 billion in investments seems like a vast amount, the long period of the agreement diminishes the value of this figure; it is highly likely, after all, that its value after 10 years, let alone after 25 years, will be lower than its value today in light of the severe inflation currently gripping the world.

The most important development at the present is the ever-more heated debate over the agreement since this comes at a time when Iran is engaged in tough talks with the US and European countries to reach a new deal that brings about relief from the economic sanctions, which have caused the Iranian people to endure woeful conditions over the past three years. Iran still needs China to support its negotiating position and achieve a balance within the P4+1 group. Thus, there is no problem for Iran to hint at rapprochement with China, help Beijing’s policy of polarization to counter US clout globally and throw weight behind a multipolar global order to score points in the talks with the West or even merely expedite the lifting of the economic sanctions. In effect, the agreement is a tool to counter pressures among the different parties.
There are factors that increase the chances of moving ahead with the agreement — though on a selective basis — such as increasing cooperation in the economic and commercial fields between China and Iran (China is Iran’s biggest trade partner presently). This comes amid the desire of the incumbent Iranian regime to put an end to the Western countries’ pressures on Tehran periodically — as Ebrahim Raisi stated before — in return for them accepting the non-expansion of the partnership beyond a certain level, for internal, international, and geopolitical considerations.
Despite scaling down its presence in the region, the US is still influential and has policies and alliances opposed to the Chinese moves and objectives, whether in the region or worldwide. It is undoubtedly interested in curbing the Iranian nuclear program and reaching a deal that maintains its allies’ security and stability in the region, at the top of which comes Israel, and curtails the Iran-China rapprochement.