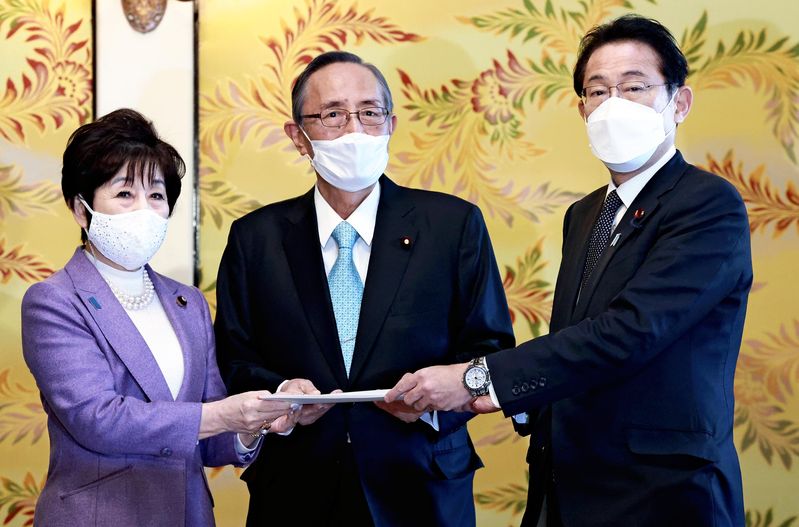 Prime Minister Fumio Kishida submitted to leaders of the Diet on Wednesday a final report on how to ensure a stable Imperial succession, a step taken to kick off discussions between ruling and opposition parties on the issue.

The report was compiled in December by a government advisory panel and examined by the government. It presents two main plans to secure a sufficient number of Imperial family members: One is to allow female members to remain in the Imperial family after marriage; the other is to use adoption to restore Imperial status to members of former Imperial family lines.

On Wednesday, Kishida met with Hiroyuki Hosoda, speaker of the House of Representatives, and Akiko Santo, president of the House of Councillors, among other officials, to present the final report. The prime minister said as he handed over the report that the government “respects” its contents and was therefore notifying both chambers of the Diet.

As one of the two main plans to secure a sufficient number of Imperial family members, the report proposes that women born into the Imperial family be allowed to retain their status after marriage. The other proposal was to use the adoption system to restore the Imperial family status of male descendants in the family’s paternal line.

Revisions of the Imperial House Law and other procedures would be necessary to realize these proposals, but discussions between ruling and opposition parties are expected to run into rough waters.

Chief Cabinet Secretary Hirokazu Matsuno will hold a meeting on Tuesday with representatives from political parties and parliamentary groups to explain about the report.

When a special law was enacted in 2017 to allow the abdication of the Emperor Emeritus, a supplementary resolution called on the government to promptly study measures to ensure a stable succession to the Imperial throne and whether to allow female members to create Imperial family branches, as well as to report its own study to the Diet.