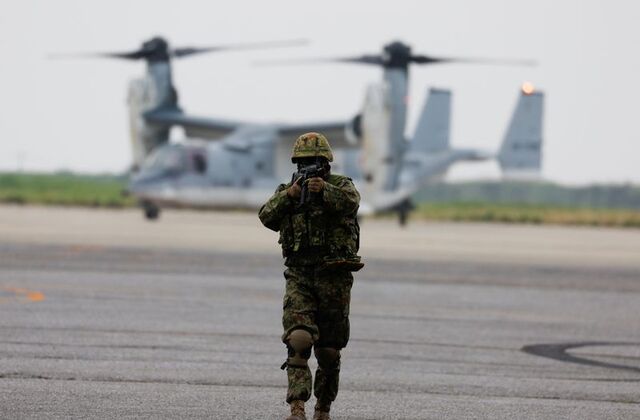 The report sets out the government’s security concerns as it prepares the defense ministry budget request due next month, aiming to build public support for an unprecedented hike in military funding that the ruling party aims to double over the next decade or so.

It also sets the stage for a year-end national security review expected to call for the acquisition of longer-range strike missiles, strengthened space and cyber capabilities, and tighter controls over access to technology.

“The political, economic and military rivalries between nations is clear, and the challenge posed to the international order is a global issue,” the white paper said.

It describes Moscow’s attack on Ukraine as a “serious violation of international law” and raises concerns that Russia’s use of force to resolve a dispute established a precedent that threatens the security of neighboring Taiwan, which Beijing views as its own territory.

Beijing says it has sovereign rights and jurisdiction over the waterway.

Kishida’s ruling Liberal Democratic Party, which has pledged to double military spending to 2% of GDP, gained seats in national elections for upper house lawmakers this month.

A 2% target would bring Tokyo in line with a minimum commitment set by North Atlantic Treaty Organization (NATO) members, and given the size of its economy, would make the pacifist nation the world’s No.3 in total defense spending after the United States and China.

The white paper cited comparative OECD estimates of defense spending for Japan and eight other countries, showing Japan at 0.95% of GDP, the United States at 3.12%, South Korea at 2.57%, nearby China at 1.2%, and neighboring Russia at 2.73%.

Japan’s spending as a percentage of GDP is lower than all other Group of Seven nations, as well as Australia and South Korea, it said.

“Spending per capita in South Korea, Britain, France, and Germany is two to three times as much,” the document said.

“China has expressed its strong dissatisfaction and resolute opposition to this, and has lodged stern representations to the Japanese side about this,” he said.

“We urge the Japanese side to immediately stop the erroneous practice of exaggerating security threats in its neighborhood and finding excuses for its own strong military arsenal,” Wang added.