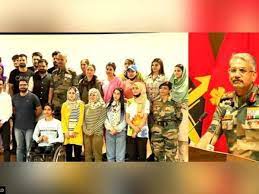 Kashmiri youths thanked the Indian Army for their contribution in improving the lives of Jammu and Kashmir civilians. On May 2, an event was organised by the Kashmiris for the Indian Forces, and a youth who was awarded the Kashmiri Young Achievers award dedicated his success to the forces and thanked them for their constant support. The Indian Army also appealed to the youth of Kashmir to choose education and development over the Pakistan-backed propaganda.

Indian Army’s Lieutenant General Devendra Pratap Pandey, who is currently serving as General-Officer-Commanding (GOC) of the Srinagar-based Chinar Corps addressed the event and hailed Kashmiri youths’ courage and valour for finding a voice and standing up against terrorism.

Lieutenant General Devendra Pratap Pandey on Sunday said that the youths of Kashmir realised that the path to terrorism is futile. Speaking about the present condition of Jammu and Kashmir’s Shopian, General Pandey said that there is a decrease in the local recruitment for terrorism.