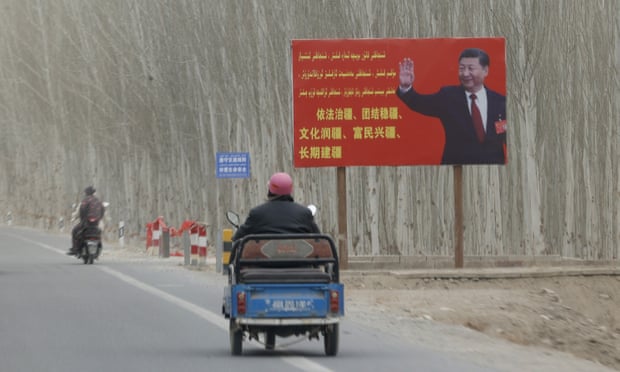 Excerpts from previously unpublished documents directly linking China’s crackdown on Uyghur Muslims and other minorities in Xinjiang province to speeches by the Chinese leadership in 2014 have been put online.

The documents – including three speeches by Chinese president Xi Jinping in April 2014 – cover security, population control and the need to punish the Uyghur population. Some are marked top secret. They were leaked to the German academic Adrian Zenz.

In the documents, the highest levels of the Chinese Communist party (CCP) leadership call for Uyghur re-education and relocation to rectify an imbalance in the Uyghur and Han population in Xinjiang.Zenz said the top secret and confidential documents are significant because they show multiple links between the demands of the Chinese leadership of 2014 and what subsequently happened in Xinjiang, including mass internment in re-education camps, coercive labour transfers and optimising the ethnic population by increasing Han population shares.

Zenz alleges that the documents show the leadership’s long-term intent to commit cultural genocide with the specific purpose of safeguarding the rule of the CCP.

The documents were handed in full in digital form to the Uyghur Tribunal – an independent people’s tribunal based in the UK – in September, but have not been published in full in order to protect the source of the leak.

Instead transcripts from some of the documents, lengthy quotations, summary and analysis have been published. The transcripts were peer reviewed by Dr James Millward, professor of inter-societal history at Georgetown University Washington and Dr David Tobin lecturer in east Asian studies at the University of Sheffield. Some have been redacted to remove reception stamps. The leak covers 11 documents and 300 unique pages. They range from April 2014 to May 2018.

Zenz said some of the documents were drawn upon by the New York Times in a report in 2019, but that the leak also comprises previously unseen information.

In late 2016, just before the implementation of a set of unprecedented measures in Xinjiang, the leaders’ statements were handed to Xinjiang’s cadres as crucial study material, preparing them to implement the measures.

In one 2014 speech covered by the leak, Xi argues that the belt and road initiative, his signature foreign policy project, requires a stable domestic security environment. He asserts that the entire country’s national security and the achievement of China’s major goals in the 21st century will be in jeopardy if the situation in southern Xinjiang is not brought under control.

The speech was delivered weeks after Xi called for “all-out efforts” to bring to justice assailants who murdered 31 people and wounded more than 140 with knives and machetes in a bloody killing in the south-western city of Kunming on 1 March. Beijing blamed Xinjiang separatists for the attack.

In the speech Xi demands that the region engage in an all-out battle to “prevent Xinjiang’s violent terrorist activities from spreading to the rest of China”, argues that “stability across Xinjiang and even across the whole country depends on southern Xinjiang”, and calls for “a crushing blow to buy us time”.

He notes that since violent acts had already spread to other regions of China, “therefore we propose that Xinjiang is currently in … a painful period of interventionary treatment”. Religious extremists, he says, are “devils who will kill without blinking an eye”.

He also warns religious extremism is “a powerful psychedelic drug”, and calls for reform through education, as opposed to a practice of arrest and release – a reference to re-education and detention camps.

In another document, Xinjiang’s party secretary, Chen Quanguo, personally commands officials to “round up all who should be rounded up” and says the region’s vocational re-education facilities should be “unswervingly operated for a long time”.

In one of Xi’s speeches, he argues that “population proportion and population security are important foundations for long-term peace and stability”. This statement was later quoted verbatim by a senior Xinjiang official in July 2020, who then argued that southern Xinjiang’s Han population share was “too low”.

Other classified documents lament “severe imbalances in the distribution of the ethnic population” and a “severely mono-ethnic” population structure (an over-concentration of Uyghurs) in southern Xinjiang. They mandate that by 2022, 300,000 settlers (mostly Han from eastern China) are to be moved to regions in southern Xinjiang administered by the Xinjiang Construction and Production Corps, also known as “bingtuan”, a paramilitary entity, with the explicitly stated aim of increasing Han population shares in the region.

The fresh leak was first mentioned at a special session of the UK-based tribunal on Saturday.

Government reports indicate that in February 2017, just weeks prior to the start of an internment campaign, leading cadres in prefectures and counties were subjected to an intensified study schedule of two of Xi’s speeches for at least two hours every week.

Zenz has been denounced by defenders of Beijing as a Christian fundamentalist determined to destroy Chinese communism. The Chinese government has sanctioned him. It has always maintained that political, economic and religious freedoms in the Xinjiang region are “fully guaranteed”.

Zenz claims the new material shows that top Chinese leaders viewed the achievement of “stability maintenance” and related goals such as religious “de-extremification” in Xinjiang to be a matter of China’s national security, crucial to achieving primary long-term political goals.