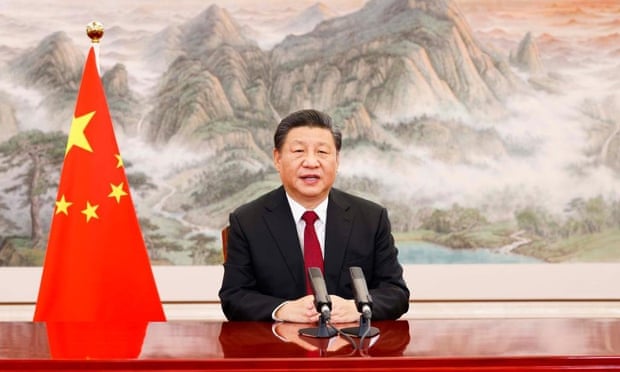 China’s ambitious low-carbon goals will not be realised easily and should not come at the expense of energy and food security or the “normal life” of ordinary people, its president, Xi Jinping, has said, signalling a more cautious approach to the climate emergency as the economy slows.

China, the world’s biggest source of greenhouse gas emissions, has been under pressure to “enhance ambition” and take more drastic action to tackle global heating. In the past two years, Beijing has also made a number of pledges to show its commitment.

But as the economy slows, China is worried about the risk to jobs and growth. The concern is particularly serious as Beijing prepares to hold a Communist party meeting that is expected to extend Xi’s rule later this year.

Late on Monday, Xi told Communist party leaders that China needed to “overcome the notion of rapid success” and proceed gradually. “Reducing emissions is not about reducing productivity, and it is not about not emitting at all, either,” he was quoted as saying by the state news agency Xinhua.

“We must stick to the overall planning and ensure energy security, industrial supply chain security and food security at the same time as cutting carbon emissions,” Xi said.

Xi also cautioned against a campaign-style decarbonisation but advocated for coordinated national measures. “[We should] consider the reality of the regional resources and industry distribution … avoid uniform steps and one-size-fits-all,” he added.

The cautious tone, according to Yan Qin, a lead analyst at Refinitiv financial analysis in Norway, has emerged since late last year, whenChina experienced a sudden power shortage that affected millions of households. “This in practice means less restrictions on fossil fuel. For example the policy goal in the 14th five-year plan is only to limit growth in coal consumption.”

But Qin said the cautious approach did not mean Beijing was reneging on its promises. “The fact that this topic was discussed at the first study session of the year at the politburo indicates the top leadership is holding on to the pledges,” she said. “In short, Xi’s message was: it is still important, but let’s be sturdy and not to rush for results.”

Since a national economic work meeting at the end of last year, policymakers have repeatedly emphasised China would “prioritise stability” in 2022. This showed the extent of the ruling elite’s concern for the economy, the world’s second-largest.Advertisement

The approach has already started to feed into policymaking, with Zhang Bo, chief engineer of the ministry of ecology and environment, telling reporters earlier this week that China would not impose strict water quality targets on local governments, and would instead encourage them to “consolidate” previous gains.China urges developed countries to take the lead in cutting out coalRead more

With energy supplies still a big concern after a wave of shortages hit manufacturers last year, Xi also told party leaders that “the gradual withdrawal of traditional energy must be based on the safe and reliable replacement by new energy”.

China has promised to accelerate the shift to renewables, but will only start to reduce coal consumption – a main source of CO2 – after 2025. Its state planning agency also said in December that it would loosen blanket restrictions on energy consumption to ensure environmental targets did not erode growth.

In November at the Cop26 summit, China and the US announced a surprise plan to work together on cutting greenhouse gas emissions in the crucial next decade. The world’s two biggest emitters unveiled a joint declaration that would see them cooperating closely on the emissions cuts scientists say are needed in the next 10 years to stay within 1.5C.

China and the US said they would work together on some specific areas, such as cutting methane – a powerful greenhouse gas – and emissions from transport, energy and industry.