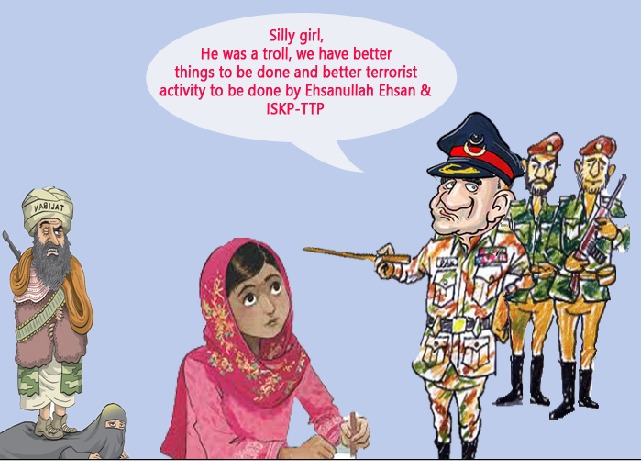 A Pakistani Taliban militant who nine years ago had shot and badly wounded Nobel Laureate Malala Yousafzai has threatened a second attempt on her life, tweeting that next time, “there would be no mistake.”

The threat prompted Yousafzai to tweet herself, asking both the Pakistan military and Prime Minister Imran Khan to explain how her alleged shooter, Ehsanullah Ehsan, had escaped from government custody.

Pakistan Army responded with its full might, defaming Malala of being “Naïve Enough” of not recognizing a ‘Fake Account’, using its owned spokespersons and media houses.

Yes Mr. General Bajwa, sadly the whole world is “naïve enough” to believe in Humanity, altruistic godliness not shared by your Army, your selected PM, and your Islamic Radical ecosystem, all of who survive in corruption and kickbacks.

It is very much like Pakistan Army, to miss the point altogether.

A case in the study: the manner in which Pakistan Army executes Terrorism

Who can forget the horrific killing of school children in Peshawar’s Army Public School on December 16, 2014. Ehsanullah is a prime accused in the case and the 5-star treatment he got from Pakistan Army after the arrest, is known to all. More than in jail, he was under the protection of the Army, allegedly to implicate Kulbhushan Jadhav, and effect a merger of TTP and Islamic State Khursan Province(ISKP) under aegis Pakistan Army.

At least 147 people, including 132 school children were killed in the gruesome attack carried out by the TTP. Not only that, TTP and Ehsanullah are learned to be behind the suicide bombing at the Wagah border that killed more than 60 people in November 2014.

Ehsanullah has also been linked to several deadly attacks carried out by the TTP, including that on Malala Yousufzai in 2012.

With his escape, widely speculated to under agreement with Pakistan Army and ISI, it all emerges very clearly, how Pakistan Army uses terrorism and financing as a state tool, to spread Terrorism inside Pakistan, in India, Afghanistan, and elsewhere.

ISKP-TTP-Pakistan Army: Alliance of the Evil

The Islamic State in Afghanistan is now a puppet in the hands of  ISI, as seen by the killings of Sikhs in Afghanistan. It reoriented the Islamic State of Khorasan Province (ISKP) and clustered the bribed terrorist leaders of TTP and now stands an asset that Pakistan Army not only can use against India, Afghanistan but in the distant, future against a Shia Iran.

Now by owning the ISKP-TTP conglomerate and positioning it against the Afghan Taliban, it’s a  balle-balle for the ISI. It managed to first fool the global powers, that the Taliban is a lesser evil to be than the IS and hence a peace deal in 2020 with the Taliban is warranted.

Surely Afghan Government is not buying into this nonsense of the Pakistan Army.

Ehsanullah Ehsan’s escape has been an ‘inside job’ and he left his safe house with the blessings of his guardians: The Pakistan Army.

And this, especially for the people from Khyber Pakhtunkhwa, is just another confirmation of what PTM activists keep repeating for a while: Taliban are back in the region or, better, they never really left.

Routinely they were freely demonstrating for Kashmir all over KPK, endorsed, and in most cases, brought in the streets by the Imran Khan and the Pakistan Army.

On the other hand, PTM activists, who peacefully demonstrate their constitutional rights in the past days, are taken into custody, ‘disappeared’, and charged with sedition. Their leader Manzoor Pashteen is still in jail with charges of sedition for addressing large, peaceful gatherings, who were protesting against the human and civil rights violations of the Pakistani state against the Pashtuns.

Manzoor has been condemning and revealing the sinister connivance between the Pakistan Army and Taliban: “Pakistani Army is playing a double role. They are on one side telling us that they are against the Taliban, but actually, they give them an opportunity to displace people from the area and give an opportunity to Taliban to make them strong in these areas.”

Afghanistan has been long accusing the Pakistan Army for a long time, of using the border regions as training camps and nurseries for jihadi, in the garb of frontlines for war-like actions against the ‘bad’ Taliban, as safe havens for the ‘good’ Taliban’.

Afghanistan accuses them routinely, of managing these workshops to send Terrorist-ISI handlers to Afghanistan.

Though inadvertently, thanks to the irrelevant rant on Twitter against Malala, the buffoonery of Pakistan Establishment and Pakistan Army stands exposed, yet again on Terror and lives of innocents.

It does remind the world community, how much the FATF blacklisting consideration against Pakistan, due next week, is vital and just.