Millions in need of aid as ‘unprecedented’ floods hit Pakistan 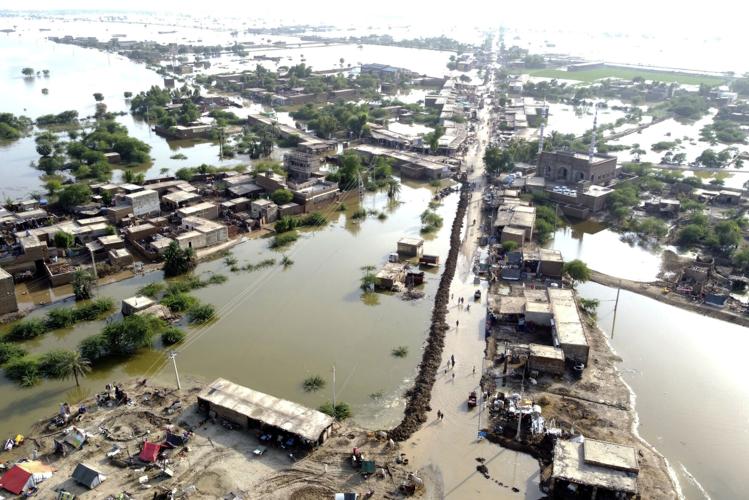 Millions of Pakistanis affected by the worst flooding in a decade are in desperate need of aid as authorities say they have been “overwhelmed” by the scale of the disaster, with the country’s climate minister calling it a “serious climate catastrophe”.

The death toll from monsoon flooding since June has reached 1,136, according to figures released Monday by the country’s National Disaster Management Authority.

It said 75 people had died in the previous 24 hours, but authorities were still trying to reach cut-off villages in the mountainous north.

The unprecedented monsoon season has affected all four provinces of the country. Nearly a million homes have been destroyed or badly damaged, numerous roads rendered impassable and electricity outages have been widespread, affecting at least 33 million people.

Rasheedan Sodhar had to walk more than 20km (12 miles) to safety after her village in southern Sindh province was submerged by water.

“We are a family of 20, and we were told yesterday [Sunday] to immediately leave the village. We have nothing left. We are alive, but we are not able to live any more,” the 25-year-old teacher told Al Jazeera, adding that she could not save her 30 livestock while her house was destroyed by the deluge.

Sodhar said her entire family, with pregnant women and infants, have no shelter and are living in the open in scorching weather in the nearby town of Mehar. “We barely get one meal a day. Our children are crying all day. What can you tell them to stop crying when there is no home for them,” she said.

Hundreds of thousands of people have been evacuated from flooded areas.

Some 180,000 people have been evacuated from Charsadda and 150,000 from Nowshera district in northwestern Khyber Pakhtunkhwa province, Kamran Bangash, a spokesperson for the provincial government, said.

Many have been forced to take shelter on roadsides.

Khaista Rehman, 55, took shelter with his wife and three children on the side of the Islamabad-Peshawar highway after his home in Charsadda was submerged overnight.

“Thank God, we are safe now on this road quite high from the flooded area,” he told The Associated Press news agency.

“Our crops are gone and our home is destroyed but I am grateful to Allah that we are alive and I will restart life with my sons.”

Deaths from widespread flooding in Pakistan have reached 1,061 since mid-June, officials said on Sunday, as Prime Minister Shehbaz Sharif on Sunday announced a $45m relief fund for the flood-hit Balochistan province.

“I saw floodwater everywhere, wherever I went in recent days and even today,” Sharif said on Monday in Charsadda, one of the devastated towns. He said the planes carrying aid from some countries have reached Pakistan as he expected more in the coming days.

The United Nations will launch an international appeal for Pakistani flood victims on Tuesday in Islamabad, the national capital.

Flash flooding from the heavy rains has washed away villages and crops as soldiers and rescue workers evacuated stranded residents to the safety of relief camps and provided food to thousands of displaced Pakistanis.

“What we see now is an ocean of water submerging entire districts,” Climate Minister Sherry Rehman told the AFP news agency on Monday.