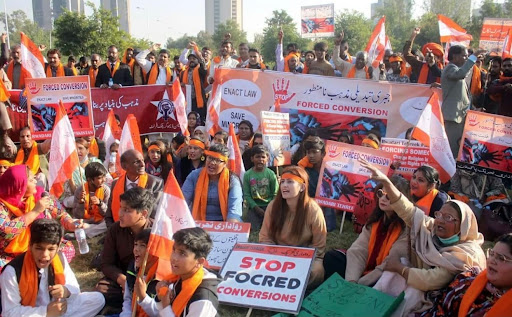 According to Asia News, religious minorities protested over the weekend in Islamabad, Pakistan against the government’s rejection of a law banning abductions, forced marriages, and forced conversions. Christian and Hindu activists in Pakistan say that their communities are being ignored by the government on this issue.

At a protest led by the Rwadari Tehreek group on Saturday, participants protested the government’s decision to reject a law that would outlaw forced conversions in Pakistan. The event was attended by various political and religious leaders, including Bishop Emeritus Mano Rumal Shah, Bishop Majeed Ashiq Naz, and representatives of civil society organizations.

People from various faith backgrounds participated in the rally, chanting slogans against Pakistan’s judicial system that has been unable to confront the issue abductions, forced marriages, and forced conversions.

“There is a dire and urgent need to stop this grave human rights violation with proper legislation along with concrete implementation mechanisms before it is too late,” Salamat claimed.

According to a 2014 study by the Movement for Solidarity and Peace Pakistan, as many as 1,000 Christian and Hindu women and girls are abducted, forcefully married, and forcefully converted to Islam every year.

Many victims are minors taken from their families, sexually assaulted, married to an assailant, and held in captivity justified by falsified marriage and conversion documents. Violence, threats, and grooming tactics are used to compel victims to make statements in court supporting their captors.

The issue of religion is also often injected into these cases to place religious minorities at a disadvantage. Playing upon religious biases, perpetrators know they can cover up and justify their crimes by introducing the element of religion.