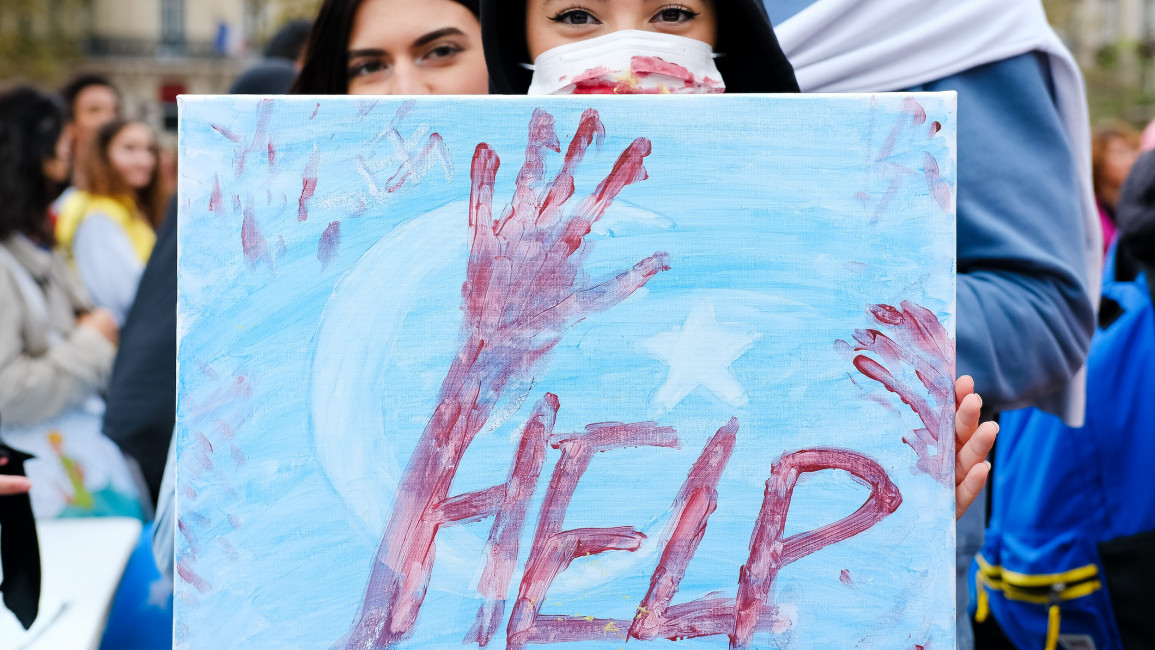 The Taliban takeover of Afghanistan and its kowtowing to China, not only over its wealth of subterranean treasures but also over the fate of hundreds of Uyghurs on its soil, has again put the spotlight on the Islamic world and its silence over the atrocities in Xinjiang.

Blind to the mounting “tidal wave” of evidence concerning atrocities against the Uyghurs, crimes that many Western democracies have assessed as genocide, Muslim nations continue not only to turn a blind eye to the suffering of their fellow believers but lavish praise on their persecutors.

Giving evidence to the recent Uyghur Genocide Tribunal in London, Uyghur Muslim, Abdul Hakim Idris, husband of Rushan Abbas, Executive Director of Campaign for Uyghurs, accused China of wielding its economic might to buy the silence of predominantly Islamic nations, and those nations of capitulating without a struggle.

Refusing to criticise Beijing for widely publicised mass incarcerations, disappearances and its onslaught against religion and culture, Muslim leaders are colluding with the Chinese Communist Party (CCP) illusion that crackdowns against Uyghurs are mainly to do with fighting extremism. Playing the terrorism card is convenient, maintains Idris because these leaders avoid having to alienate a wealthy and powerful benefactor and one to whom they are beholden.

Author of Menace, an account of “China’s colonisation of the Islamic world” Idris claims that tactics used by the CCP to woo the Islamic world include using the Chinese Islamic Association (CIA) to do its dirty work.

Led by politically correct Imams who dare not speak against their own government, the CIA hold press conferences and seminars in Muslim countries and use their own Hajj pilgrims to smokescreen the troubles at home. Foreign government officials and civil society leaders are feted in Xinjiang, enjoy choreographed mosque visits, and hear from released “vocational training school” graduates, whose lives have ostensibly been transformed by the experience.

Beijing’s largesse has muzzled nations of the Islamic world, he says. Crippling loans and ambitious infrastructure projects have ensured that countries of the Organisation Of Islamic Cooperation (OIC), including Saudi Arabia, Egypt, Pakistan, the UAE, Qatar and Algeria, have all, on paper at least, bought into China’s justification of the detention of up to three million of its Turkic Muslims, the abduction of at least half a million of its infants and children, the destructıon of mosques and religious sites, the creation of a virtual open prison throughout the entire North-Western region and the widespread enforced sterilisation of its women.

These countries, according to Idris, have connived with China to explain away the atrocities as an “internal matter” and beyond criticism. Media outlets throughout the Islamic world are silent on the tragedy, he says, citing Egypt’s Al Akhbar newspaper that has sold an entire page to Beijing for a daily offering of China’s version of world news where the Uyghur issue is studiously avoided or distorted. “Rather than an outcry against the genocide, the opposite is true and the silence is deafening,” says Idris.

The OIC has become increasingly tight-lipped since 2019 when the full extent of the atrocities was uncovered, says Omer Kanat, executive director of the Uyghur Human Rights Project (UHRP). He describes statements made by Muslim leaders in response to the crisis as “absurd.”

“Frankly, I don’t know much about that,” replied Prime Minister of Pakistan, Imran Khan, in March 2019 when confronted by the mass internment on his doorstep. Afraid of jeopardising phase two of the China-Pakistan Free Trade Agreement signed in January 2020, he repeated his denial of the reports in June 2021, when he said, “In our conversations with Chinese, this is not the case. China has been one of the greatest friends to us in our most difficult times. China came to the rescue when our economy was struggling.”

President of Indonesia Joko Widodo, was quoted in March 2019 as denying all knowledge of the atrocities. “I don’t know the facts there, so I don’t want to comment,” he had said.

Leaders in other Muslim-majority states and territories, such as Bahrain, Egypt, Iran, Morocco, Palestine, and the United Arab Emirates, have given their backing to China’s Uyghur policies in the United Nations.

The fate of Uyghur, Idris Hasan, currently being held by the Moroccan authorities following demands by Beijing that he be turned over, hangs in the balance.

Dozens of Uyghur students were returned to uncertain fates by Egypt’s Al Hazar University following Beijing’s insistence in 2017 and countless Uyghurs have been handed back to China by Tajikistan, Uzbekistan and Kirghistan.

The first documented case of forcible repatriation of Uyghurs considered terrorists by Beijing, was in 1997 when 14 Uyghurs were returned by Pakistan and summarily executed after crossing the border. This case and a trove of 1,546 cases, across 28 countries of detention and deportation between 1997-March 2021, have been compiled by the Oxus Society for Central Asian Affairs and the UHRP in a new report No Space Left To Run launched in June this year.

Its conclusions show how governments from predominantly Muslim nations “have cooperated with Beijing to surveil, detain, and repatriate Uyghurs and other Muslim minorities from China who have fled Xinjiang.”

Bradley Jardine, the director of research at the Oxus Society for Central Asian Affairs and the report’s lead author, told RFE/RL, “This database shows that it isn’t just hypocrisy from the Islamic world, it’s active collaboration with China.”

Idris is perturbed at the duplicity of Islamic nations. With one breath they swear allegiance to their Muslim brothers, he claims, whilst at the same time they are still content to receive large handouts from China.

During a visit to Kashgar in the Uyghur Heartland, while he was president, Iran’s Supreme Leader, Ayatollah Ali Khamenei, professed a deep and personal love for the city. “He knows exactly what is going on in Xinjiang,” said Idris, “but despite this Iran was happy to close a 400 billion dollar deal with China this year, to build their roads, their infrastructure, and install Huawei’s 5G networks.”

The Crown Prince of Saudi Arabia, Mohammad bin Salman, accepted a 93 billion dollar investment deal from China while enthusiastically supporting China’s anti-terrorism efforts. According to Idris, the Saudi backing for the atrocities on national Chinese TV, bolstered Beijing’s propaganda war when it was given maximum airtime throughout the province.

From UAE Confucius institutes peddling Mandarin classes and Pakistan’s 150 billion dollar investment portfolio to collaboration with Egypt over building its new capital, pressure on Turkey to ratify an extradition treaty in exchange for Covid vaccines, and latterly offers to help the rogue Taliban government (with which it has enjoyed good relationships since 1998) rebuild the country in exchange for lithium and Uyghurs, Beijing’s grip on the Muslim world is tightening, claims Idris.

The creation of the Shanghai Cooperation Organisation in 2001, to ensure security and stability across the vast Eurasian region, has become China top-heavy according to Idris and increasingly hostile to Uyghurs. Consisting of China, India, Kazakhstan, Kyrgyzstan, Pakistan, Russia, Tajikistan, Uzbekistan, and most recently Iran, extradition treaties are not necessary between member states, and demands by China to hand over Uyghurs are obeyed without a whimper. China’s offers to build internet firewalls in each of these countries would render them as oppressive and Orwellian as Xinjiang has become.

Amid the betrayal and double-dealing, however, Omer Kanat has noticed the beginnings of a groundswell of support for Uyghurs from Muslims on the ground who are prepared to rise up and defy their leaders. Speaking to the Malaysian news journal, Malaysiakini, he said that in December 2020, 150 Muslim organisations from 15 countries called on the Organisation of Islamic Cooperation to live up to its charter, to “preserve and promote the lofty Islamic values of peace, compassion, tolerance, equality, justice, and human dignity” and condemn the atrocious crimes committed against Uyghurs.

“NGOs from nine Muslim-majority countries, including Malaysia and Indonesia, have endorsed the global call to action for corporations to stop profiting from the state-organised forced labour of Uyghurs,” he said, encouraged that Muslim civil society on social media, groups such as “Malaysia4Uyghur”, “Free Uyghur Now” and “Indonesia Save Uyghur” are calling for urgent action.

He was heartened at worldwide civil society discontent that is growing increasingly sceptical about Chinese political and economic influence in their countries. “As China’s narrative of condition-free, debt-free, and sustainable capital unravels,” he said, “protests in Argentina, Hungary, Kazakhstan, Kenya, Kyrgyzstan, Myanmar, Sri Lanka, and Vietnam, among others, should give leaders in Muslim-majority states pause for thought: is it worthwhile to conform to Beijing’s vision of the world in exchange for aid, trade, and investment when citizens increasingly question this policy?” he asked.

But for the protests to gain sufficient traction to overturn decisions made by their leaders at the UN, fear of economic retaliation was a significant barrier. Referring to Beijing’s ability to muzzle opposition to its policies around the world, and its incremental encroachment on free speech, he warned, “that fear is exacting a very heavy price for the Uyghur people, but if silence becomes a habit, who will be the next to pay a price?