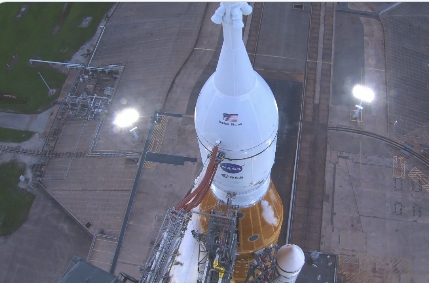 NASA has postponed the launch of the Artemis 1 mission to the moon due to a malfunctioning core stage engine. The American space agency had been set to launch on Monday its colossal next-generation rocketship named as Artemis programme on a long-awaited debut test flight, a planned six-week uncrewed voyage around the moon and back, 50 years after Apollo’s last lunar mission.

The countdown clock was halted about 40 minutes before the targeted launch time, as the 32-storey-tall, two-stage Space Launch System (SLS) rocket and its Orion crew capsule awaited liftoff from the Kennedy Space Center in Cape Canaveral in Florida. The US space agency cited a problem detected on one of the rocket’s main engines after launch teams had begun filling the rocket’s core fuel tanks with super-cooled liquid oxygen and hydrogen propellants.

NASA did not give a new launch date but said its first available backup launch opportunity was set for Friday, 2nd of September. Tens of thousands of people, including US Vice President Kamala Harris – had gathered along the beach near the Kennedy Space Center in Florida to watch the launch.

The goal of the flight, is to test the SLS and the Orion crew capsule that sits atop the rocket. Orion was due to carry a simulated crew of three – one male and two female mannequins – fitted with sensors to measure radiation levels and other stresses that real-life astronauts would experience.