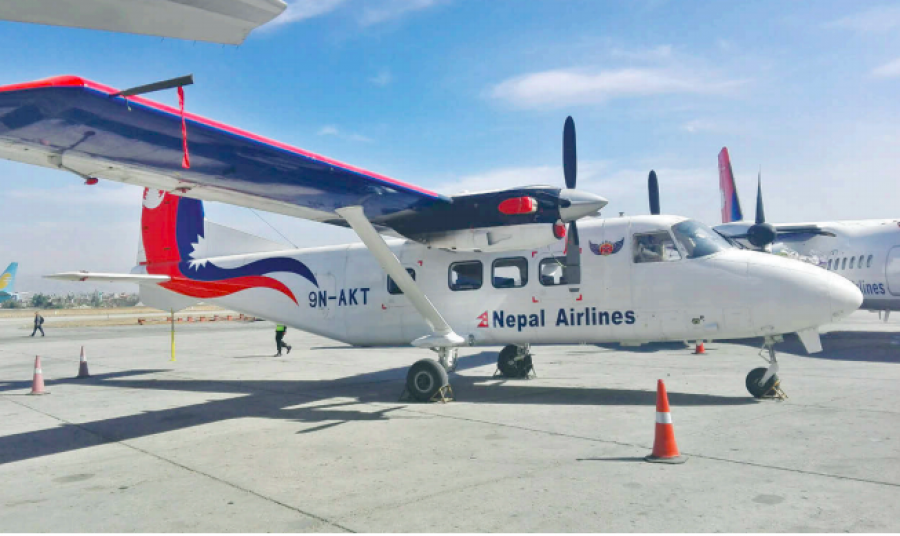 The words ‘Made in China’ have negative connotations in India as they often come to represent substandard, cheap products that do not last long and are often not worth the price. Nepal Airlines is finding this out the hard way.

The airlines has grounded six Chinese-made aircrafts saying that it is proving to be unaffordable to fly them. China is known to supply sub-standard equipment that requires heavy maintenance.

Nepal Airlines has repeatedly said that the Chinese-made planes were causing heavy losses ever since they were acquired between 2014 and 2018, and that it wants to remove them to stop further losses.

In 2020, board members of Nepal Airlines took the decision to ground the planes which came six years after the first batch landed in Kathmandu.

In total, there were six Chinese aircraft— 2 MA60 and 4 Y12E. One each were given to Nepal in grant. Nepal bought four in a government-to-government agreement. These included 1 MA60 and 3 Y12E, however, Nepal lost one Y12E in an accident in 2018

One of the Nepal Airlines official told WION that functioning of these aircrafts ‘is and will not be profitable for Nepal’.

“We have been facing technical problems in functioning of these aircrafts. The spare parts are not easily available and repairing aircrafts is expensive and time taking. To run these planes, pilots with specific skills are required which we are short of. There are pilots in China but due to language barrier training pilots in Nepal is not possible,” the official who wished to remain anonymous said.

“We did approach China for help but nothing has been initiated from their side yet. The board of directors of Nepal Airlines hold meeting on a daily basis to discuss on training Nepalese pilots but we are yet to take a decision on that,” the source added.

When the deal was signed, Nepal Airlines Corporation did not have any pilots trained to fly the Chinese aircraft. Six years later, situation remains the same.

“It is a different aircraft which requires different training. Being a rare aircraft, there is a small-scale production of spare parts. The warranty period of many spare parts of these aircrafts have expired. Functioning of these aircrafts is and will not be profitable for us but still we are trying to put one aircraft in use as we are responsible to provide service to Nepalese people.”

Nepal’s finance ministry owns the planes which are operated by Nepal Airlines.

Nepal Airlines had bought these planes on loan. Since then, the carrier has been struggling to make payments, especially since these aircrafts have not been fully utilized.

As per the deal, the Nepali government has to pay the Chinese side an annual interest rate of 1.5 per cent and a service charge and management expenses amounting to 0.4% of the overall loan amount taken by the Ministry of Finance. The ministry then charges the Nepali carrier 8% annual interest on the amount of the disbursed loan.

Another official of Nepal Airlines informed WION, the carrier is supposed to pay the loan of US $35.1 million to the Ministry of Finance.

China delivered these aircraft from 2014 to 2018 but did nothing to help Nepal in capacity building.

Another official of Nepal Airlines told WION, if planes are not operating then why should the corporation pay the loan.

In November 2011, when the sale for the aircraft began, technical teams from both Bangladesh and Nepal had visited China to inspect the MA60s and Y12s.

While Bangladesh had deemed the aircraft “not suitable”, Nepal went ahead and signed an agreement with the Aviation Industry Corporation of China (AVIC) to procure six aircraft.