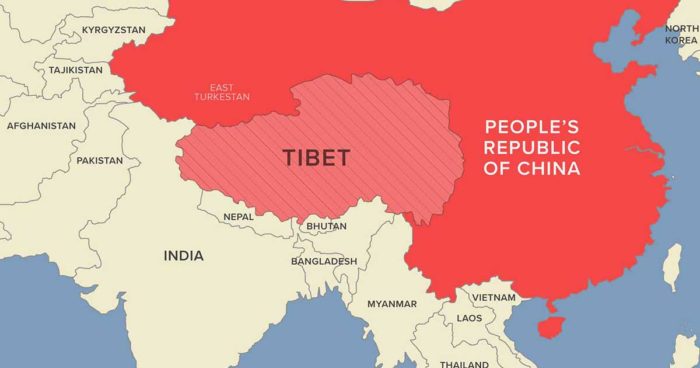 The Promoting a Resolution to the Tibet-China Conflict Act will affirm the US position that Tibet’s legal status remains to be determined under international law, despite more than six decades of China’s illegal occupation and the Chinese government’s disinformation falsely claiming that Tibet has been part of China since ancient times. Reps. Jim McGovern, D-Mass., and Michael McCaul, R-Texas, introduced the bill in the House today, July 13, 2022.

The legislation will make it official US policy that Tibetans have the right to self-determination, and that China’s policies are precluding them from exercising that right. Under China’s brutal occupation, Tibet is now the least-free country on Earth alongside South Sudan and Syria—according to the latest rankings from the watchdog group Freedom House—and the Chinese government has refused to negotiate with Tibetan leaders since 2010.

What the bill does

The Promoting a Resolution to the Tibet-China Conflict Act will:

Support from Tibetan, US leaders

The bill has received support from Tibetan and US leaders.

Penpa Tsering, the Sikyong (President) of the Central Tibetan Administration, said: “China’s rule in Tibet lacks historical support, it lacks popular support, and it lacks diplomatic support. Why is China asking nations to say that Tibet is part of the PRC [People’s Republic of China]? It is because China lacks legitimacy over Tibet. Tibetans simply want the same right to self-determination that all people across the globe deserve. We have suffered enormous abuse from the Chinese government over many decades, yet we have always sought to settle our differences through peaceful dialogue. This bill would allow the United States to back its consistent calls for dialogue with more force and urgency while helping give Tibetans a voice in their own country. We thank Reps. McGovern and McCaul for introducing the Promoting a Resolution to the Tibet-China Conflict Act, which builds on the incredible bipartisan support the United States has always shown for our just cause.”

The Central Tibetan Administration provides democratic governance for Tibetans in exile. It is based in Dharamsala, India.

Last month, during the 8th World Parliamentarians’ Convention on Tibet, House Speaker Nancy Pelosi said of the bill: “This new edition, bold, bipartisan legislation, would state clearly the history of Tibet and encourage a peaceful resolution to the ultimate status of Tibet.”

International Campaign for Tibet Interim President Bhuchung K. Tsering said: “This legislation provides an important step forward on the path for the United States to encourage a lasting solution to the oppression faced by the Tibetans. The Chinese government knows that it has no legitimacy in its claim over Tibet even though it has been occupying the country for the past six decades, and so far, its solution is to pressure countries to endorse its lie that Tibet is a legitimate part of China. With this legislation, the United States can proactively encourage China to address its unresolved issue of Tibet, which is possible through a negotiated solution with the Dalai Lama and the elected Tibetan leadership in Dharamsala. We look forward to the Biden administration taking the necessary initiatives toward this direction in the near future.”

US support for Tibet

The Promoting a Resolution to the Tibet-China Conflict Act is part of a recent surge in US support for Tibet.

During the 2020 presidential campaign, then-candidate Joe Biden promised to “work with our allies in pressing Beijing to return to direct dialogue with the representatives of the Tibetan people to achieve meaningful autonomy, respect for human rights, and the preservation of Tibet’s environment as well as its unique cultural, linguistic and religious traditions.”

Biden has already delivered on one of his campaign promises by appointing a new Special Coordinator for Tibetan Issues. In December 2021, Uzra Zeya, the Under Secretary of State for Civilian Security, Democracy and Human Rights, took on the Special Coordinator role.

In recent years, the US has also passed several pieces of legislation on Tibet.

The Reciprocal Access to Tibet Act of 2018 led the State Department to ban Chinese officials from entering the United States over their role in keeping American citizens, including journalists and diplomats, out of Tibet.

The Tibetan Policy and Support Act of 2020 upgraded US support for the Tibetan people and made it official American policy that only the Dalai Lama and the Tibetan Buddhist community can decide on his succession, with the US pledging to sanction any Chinese officials who try to interfere in that process.

Under pressure from the international community, China has held dialogue in the past with the representatives of the Dalai Lama. Ten rounds of dialogue took place from 2002-10.

But the dialogue process has been dormant ever since, with China making absurd demands that the Dalai Lama declare that Tibet has always been part of China, despite abundant historical evidence disproving China’s lies.

China has also successfully pressured other countries to accept its claims over Tibet. But with the Promoting a Resolution to the Tibet-China Conflict Act, the US will make it clear that Tibet’s status is not resolved and put pressure on the Chinese government to return to the negotiating table to reach a lasting agreement on Tibet’s future.