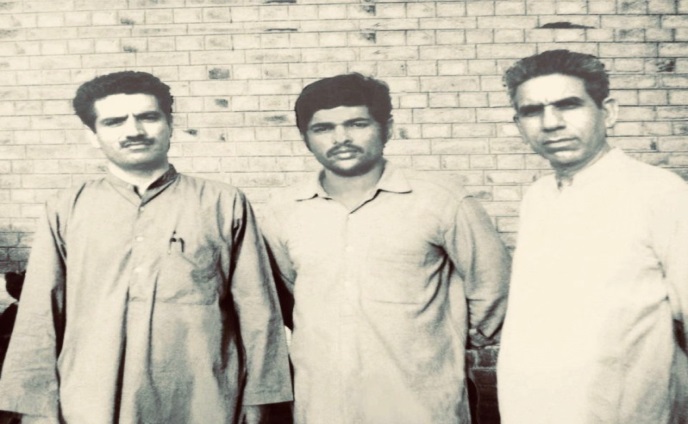 Maqbool Bhat, became the harbinger of Pakistan’s radical terror brainwash bid in Kashmir, as the first generation of Kashmiri separatists & hanged by Indira Gandhi Government, after an Indian diplomat’s cold-blooded killing by his henchmen, to secure his release, while under trial for the murder of a CID official Amar Chand.

He was born on 18 February 1938 to a peasant family in Trehgam village, district Kupwara. In the 1950s he crossed over the Line of Control(LC) to Peshawar, Pakistan, to put up with his uncle. There he completed his education and was recruited by Pakistan Army and thus joined Plebiscite Front, Azad Kashmir Chapter.

He was soon elevated to its Secretary. Maqbool contested the ‘Basic Democracy’ election initiated by the then president of Pakistan occupied Kashmir(PoK), K. H. Khurshid. Later, he also became Khurshid’s election campaigner before quitting politics, when Pakistan Army wanted him to spearhead militants invading Kashmir under Operation Gibraltar, in the run-up to the 1965 Indo-Pakistani War.

This led to the secret formation of The National Liberation Front (NLF) on 13 August 1965 at the residence of Major Amanullah in Peshawar under Maqbool Butt, Tahir Aurangzeb, Amir Ahmed, and Kala Khan, who all decided to secretly cross back over to Kashmir on 10 June 1966 and recruited terrorists. Maqbool Bhat along with Kala Khan and Mir Ahmad was arrested and tried in a Srinagar court for killing the CID officer Amar Chand and crossing the Ceasefire Line illegally. In August 1968, judge Neelkanth Ganjoo awarded the death sentence to Maqbool Butt and Mir Ahmad, and a life sentence to Kala Khan in the Amar Chand case.

Originally a militant wing of the Azad Kashmir Plebiscite Front, his organization officially changed its name to the Jammu Kashmir Liberation Front(JKLF) in Birmingham, England on 29 May 1977; from then until 1994 it was an active Kashmiri Terrorist organization.

In 1971, Bhat was accused of masterminding the hijacking of an Indian Airlines passenger airline to Lahore, Pakistan,  as the hijackers declared affiliation with JKLF under the leadership of Bhat. Pakistan, secured the release of all passengers, lodging them in a 5-star hotel, while blowing up the plane, in a bid to claim innocence and wash off the stain of pushing militants across Kashmir in the 1965 war.

Hence, after receiving instructions from Zia,  he did not hurt the passengers but blew up the plane instead, thus he served faithfully, Pakistan’s cause of a subtle international diplomatic bid of trying not to be branded a rogue terrorist state.

Disillusioned, Maqbool Butt decided to cross LoC, into India once again but was captured in 1976, in an attempt to rob a bank in Kashmir.

On 3 February 1984, Ravindra Mhatre an Indian diplomat in the UK, was kidnapped in Birmingham, England by the People’s Justice Party, supported by ISI recruited Mirpuri Pakistanis in the UK. A demand to release Maqbool Bhat was put forward by the Pakistani-ISI kidnappers. However on ISI’s instructions, on 6 February 1984 members of the Kashmir Liberation Army murdered the diplomat in Birmingham.

Thus began the dark spot on Kashmiriyat, apparently played up by Pakistan Army-ISI based stooges in the UK.

Bhat’s petition for clemency was rejected. The Indira Gandhi government bypassed long-standing judicial norms to carry out the hanging of Kashmiri separatist Maqbool Bhat at the Tihar Jail in the national capital on 11 Feb 1984. The authorities not only refused to hand over his body to his family, but he was unceremoniously buried within the jail premises itself.

5th August 2019 was the day when the history of J&K had changed forever and people welcomed PM Modi’s decision wholeheartedly. This day shall remain forever in the heart of the people of J&K because of parliament’s bold decision of scrapping Article 370.

After the abrogation of article 370, a 65% decline in Terror incidents in the J&K Union Territory was witnessed. There is a significant decline in local recruitment of Terrorists from Kashmir valley.

As NIA busted the funding of Pro-Pak groups and due to blockage of financial support, separatists and other groups are unable to make local youths dance to their tunes. There has been no curfew, strike, and ‘Bandh’ by the Pro-Pakistani Hurriyat conference. The propaganda of the Hurriyat Conference has been completely busted and halted since August 2019.

Landmarks after the abrogation of article 370 and 35A:

The issue of local and self-governance had been plaguing the common citizens of the state, the majority of whom were residing in villages. The systemic, dissolution of the Panchayat Raj, the inefficiency of the state government in empowering the local municipal corporations, hindered the common man from receiving even the most basic amenities such as water, electricity, and roads.

For the first time after the abrogation of Article 370 and the reorganization of the erstwhile state Jammu and Kashmir, Kashmiris went to the DDC polls. The first-ever District Development Council (DDC) elections in the Union territory of Jammu and Kashmir have sprung several surprises. Except for a couple of outcomes that were on expected lines, the others have been unprecedented.

Hence in December 2020, 277 DDC members took the oath, where more than 70% were common Kashmiri, who had no affiliations to previous political parties, had taken reins of their own destiny in their hands, rather than giving it to the political elite or Pakistan Army.

While Maqbool Bhat’s hanging will forever remain a blotch and a stain in the history of Kashmiriyat, two aspects do stand out in stark contrast.

Firstly, how susceptible have been the minds of Kashmiris, to be swayed by the political propaganda of the Pakistan Army, simply based on religion. This is despite the mayhem of loot, rape and arson inflicted on Kashmiris in 1947, irrespective of religion. It was Kashmiriyat under slaughter and had not Indian Army landed on time, it is likely that Kashmiriyat would have wiped out in 1948 itself.

Secondly, when Pakistan Army realized that Kashmiriyat is strong enough to derail its occupational plans, they decide to give it a slow poison of Radical Islam. Radicalization and systematic brainwash then begin, and Maqbool Bhat was a symbol of the manner in which the decency of Kashmiriyat has been outraged, systematically, over and over again.

Cultural and Identity genocide along with human genocide is now happening in Balochistan, Sindh, and against Pashtuns, other than the manner in which Baltistanis culture is being sold off to the Chinese.

However, the manner in which he was used by the ISI-Pakistan Army and abused using radicalization and brainwashed for personal terrorist goals of the Pakistan Army, it shall always be a pertinent question: does he or any other brainwashed Kashmiri stands trial for the mayhem, they have inadvertently subjected the beautiful land of Kashmir to?

And now Kashmiriyat and common man Kashmiri are ready to let the past of Terrorism and Radicalization, fade away into distant dust, as he takes the reins of his destiny in his hands. DDC elections saw more than 70% of elected were not affiliated to and stooges in hands of an erstwhile elite of Kashmir Politics/Pakistan Army. Now leadership emerges from the heart of Kashmiriyat, defeating all propaganda, radicalization, and corruption that held him back. The road may not be smooth, may have their share of bumps and curves, but the journey towards Kashmir’s Naya Daur has begun.