No Freedom Of Press In Pakistan, Journalists Face Charges For Criticising Military 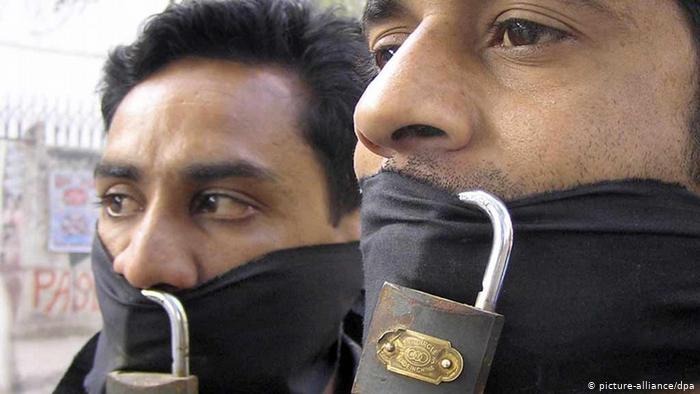 Pakistan continues to remain the most dangerous country in the world for journalists, and more and more scribes are being arrested for criticising the country’s Army under the Pakistan Electronic Crimes Act 2016 (PECA).
PECA, which is seen as the draconian tool to silence free speech, criminalises any speech considered to be “blasphemous” and even those who criticise state institutions.
Recently, a new section was added in PECA stating that those who intentionally ridicule, bring into disrepute or defame the Armed Forces of Pakistan will be sentenced upto two years and be fined over USD 3,018.
DW quoted Pakistani journalist Asad Ali Toor, who was one of the several journalists to have been charged under the PECA, as saying that the most frustrating part of his judicial process was that he was never told which of his tweets were deemed illegal, or who had filed the FIR.
“I was not told even during the hearings at the High Court in Lahore. It is very frustrating when you are standing trial for a crime you don’t understand you committed,” he said.
Last year, Toor was charged with spreading “negative propaganda” against the Pakistani state and its institutions through social media a week after being let go from his job in Samaa TV, a Pakistani broadcaster.
His case was taken up by the non-profit Media Matters for Democracy and the Pakistani Bar Council’s “Journalists Defence Committee,” which provides free legal assistance and services to journalists, DW stated.
He was cleared of all charges by the Lahore High Court in November due to lack of evidence.
According to Toor, there has been an “erosion of journalistic freedom and a simultaneous strengthening of censorship with each successive government”.
Besides Toor, two more journalists were charged with “spreading hatred” against the state in the same week in September.
One of the journalists was Farooqi, a news editor at The Express Tribune. He was taken into custody by police from his residence in Karachi after he allegedly posted social media posts criticising the Army, according to his family and friends.
He was “arrested by the station investigation officer (SIO) of defence police” from his residence in the DHA area on Friday evening, Karachi police chief, Additional Inspector General Ghulam Nabi Memon, told Dawn.
An FIR was lodged against Farooqi under Sections 500 and 505 of the Pakistan Penal Code and Sections 11 and 20 of the PECA, 2016, based on a complaint by one Javed Khan on September 9, said a senior police officer, who requested anonymity.
The reason for so many journalists being targeted in Pakistan is that the Pakistani state wishes to avoid the accountability and criticism brought on by free and independent media, Imaan Zainab Mazari-Hazir, a committee member who worked extensively on Toor’ case, told DW,
“It will impact freedom of expression and journalism by curtailing this right, and intimidating and punishing those who exercise it,” she said.
“We are already not able to discuss many issues that relate to the military and intelligence agencies, including enforced disappearances,” she added.
While Pakistan’s establishment continues to curtail press freedom, journalists like Toor are using digital platforms to challenge allegations made against them under the PECA.
“Traditional media has had to bow down to governments and censorship. Social media is not as censored, so they are now introducing these laws to scare people into silence,” he said.
Citing Pakistani digital organisation ‘Bolo Bhi’, DW reported that from 2006 to 2020, there have been 84 incidences of content blocking and takedown requests.
Since 2006, the government has begun targeting digital journalists as well.
In 2006 itself, over 1,000 websites were blocked by the Pakistan Telecommunication Authority (PTA) after a Supreme Court ruling targeting online “blasphemy”.
According to the DW report, it is estimated that the Pakistani government has allocated an estimated budget of USD 10 million towards internet filtering tools and blocking systems to control data.
From 2006 to 2020, there were as many as 36 “government announcements to crackdown and regulate social media”, Bolo Bhi highlighted.
Pakistan has been ranked 145th out of 180 countries in Reporters Without Borders’s (RSF) 2020 World Press Freedom Index, three places lower than in 2019.