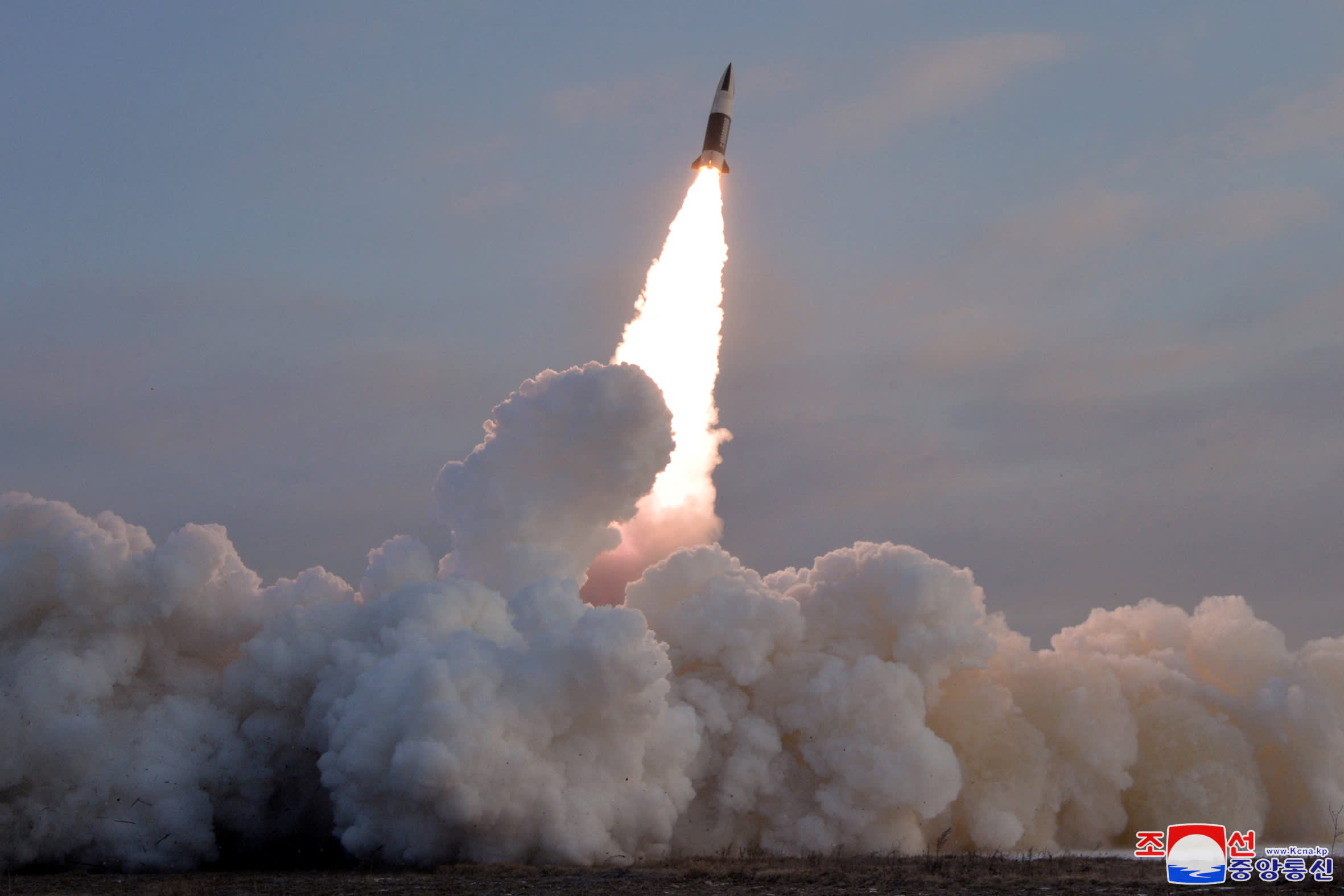 The test was the country’s ninth of the year, and comes just days ahead of South Korea’s March 9 presidential election.

Defense Minister Nobuo Kishi said the missile had traveled about 300 kilometers, hitting a maximum altitude of 550 km and landing in waters outside Japan’s exclusive economic zone, which extends 200 nautical miles (370 km) from its coast.

“This launch comes at a time when the international community is dealing with Russia’s invasion of Ukraine, and also when the Beijing Paralympics are being held. It is unacceptable,” Kishi said.

“The significant pace that North Korea is developing its missile technology is not something our country and the surrounding regions can overlook,” he added, saying that Tokyo had protested the move through diplomatic channels.

The South Korean military also confirmed the test, saying a suspected ballistic missile had been launched from the Sunan area of Pyongyang eastward into the waters separating the Korean Peninsula and Japan. It said the missile had flown around 270 km at a top altitude of 560 km.

The U.S. military’s Indo-Pacific Command said it was “consulting closely” with Seoul and Tokyo over the launch and urged Pyongyang “to refrain from further destabilizing acts.”

Saturday’s launch came after it conducted “an important test” on Feb. 27 for developing a military reconnaissance satellite. That test was also conducted from the Sunan area and traveled about 300 km, hitting a maximum altitude of 600 km.

The similarities of the two launches suggested Saturday’s was likely another test of a military satellite, observers said.

At a rare ruling party congress in January last year, North Korean leader Kim Jong Un announced a number of goals for further improving his impoverished country’s military as part of a five-year plan. The unusually detailed list of weapons capabilities included the development of military reconnaissance satellites “in the near future.”

Japan’s Defense Ministry said last week that it believed the Feb. 27 launch was a test of the military satellite Kim mentioned in his January 2021 address.

North Korea was hit with international condemnation when it last launched a satellite into orbit in February 2016. Outside experts have questioned whether the North’s satellites have been working properly, with some calling the rocket launches thinly veiled attempts to master long-range missile technology.

Rockets used to put satellites into orbit employ much of the same technology as those types of ballistic missiles, technology Pyongyang is banned from using under United Nations Security Council resolutions.

Prior to the satellite test, the North tested a Hwasong-12 intermediate-range ballistic missile on Jan. 30. Tokyo said the weapon has a range of 5,000 km — putting all of Japan and the U.S. territory of Guam within striking distance. It was the first such test since November 2017. Both Japan and Guam are home to key U.S. military bases that would be used in any crisis on the Korean Peninsula.

North Korea has hinted at ending its self-imposed moratorium on nuclear and long-range missile tests while calling on Washington to drop what it said is a “hostile policy” toward Pyongyang.

Those remarks and the spate of recent launches have stoked concern that Kim may be opening the door to tests of increasingly powerful weapons after years of focusing on less provocative launches.

Senior U.S. officials have attempted to tamp down concerns that the Ukraine crisis could take Washington’s focus off the North Korean nuclear threat, with Secretary of State Antony Blinken saying that the United States can “walk and chew gum at the same time” even as it faces down other global challenges.

Experts say the pace of tests is likely to continue according to Kim’s schedule, regardless of the world’s focus on the conflict in Ukraine.

Following the conclusion of a lengthy review of the United States’ North Korea policy last year, President Joe Biden has repeatedly said that his administration harbors no “hostile intent” toward Pyongyang and is prepared to meet “unconditionally” with a goal of “the complete denuclearization of the Korean Peninsula.”

But Kim has appeared uninterested in Biden’s pitch, condemning the U.S. offers as a “petty trick.”

Observers say the North Korean strongman has no intention of relinquishing his nuclear arsenal, as he believes it is key to his regime’s survival. Instead, he has ordered his regime to double down and prepare for a “long-term confrontation” with the United States.

In the near-term, Kim will have plenty of options to test his weapons, with a number of key anniversaries fast approaching.

The North has already begun preparations for an apparent military parade ahead of the important dates, according to the South Korean military, including the 110th birthday of Kim’s grandfather and the country’s founder, Kim Il Sung, on April 15.

The regime has been known to stage shows of force on or around dates marking every fifth or 10th anniversary, and military parades have often been employed to unveil powerful new weapons.

Leif-Eric Easley, a professor at Ewha University in Seoul, said that while the Kim regime may be unhappy with Washington’s attention to the Ukraine crisis and disappointed with Seoul’s internal focus ahead of the South Korean presidential election, those issues factored little in the latest launch.

“North Korea may be preparing a ‘satellite launch’ around the Kim Il Sung birth anniversary on April 15 and before South Korea conducts another satellite test of its own,” Easley said. “When the Kim regime faces international criticism for violating U.N. Security Council resolutions, it will likely complain about ‘double standards’ and threaten to further erode its nuclear and long-range missile test moratorium.”