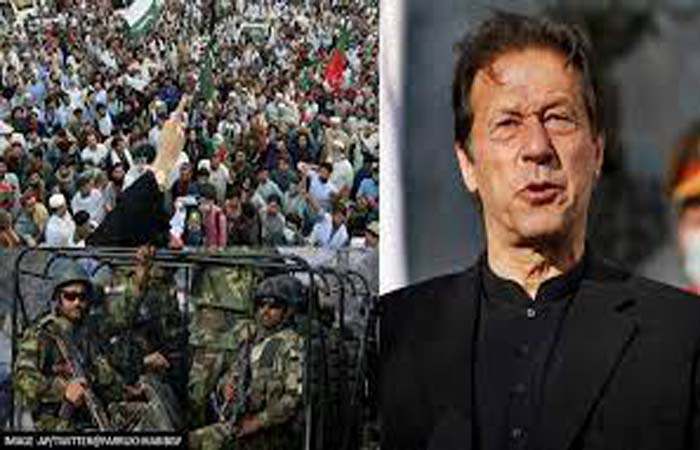 Failing to control the growing unrest due to the protest march launched by Imran Khan, the Shehbaz Sharif government has been forced to call in the army to protect the Red Zone as former Pakistan Prime Minister and PTI chief entered Islamabad in the early hours of Thursday.

“Pursuant to the law and order situation in the Islamabad Capital Territory, the Federal Government, in the exercise of powers conferred under Article 245 of the Constitution of the Islamic Republic of Pakistan, authorises deployment of sufficient strength of troops of Pakistan Army,” Pakistan’s Interior Minister Rana Sanaullah said in a government order posted on Twitter.

The Pakistan government deployed the army in Red Zone to “protect important government buildings” after Imran Khan entered the federal capital amid rising tensions in the country.

The government order said that the decision was taken for the protection of important government buildings including the Supreme Court of Pakistan, Parliament House, Presidency, Prime Minister’s Office and others.

Tension gripped the country as clashes took place between police and PTI workers after authorities tried to block them from moving toward D-Chowk in the federal capital.

Imran Khan on Wednesday warned his supporters would not vacate D-Chowk until a date for fresh polls was announced by the Shehbaz Sharif government.

Former Pakistan PM, who was ousted from power by a no-trust vote, has asked “all Pakistanis” to take to the streets in their respective cities and appealed to women and children to come out of their homes for “real independence”, the Dawn newspaper reported.

Rights groups expressed deep concern at the highhandedness of law enforcement agencies in disrupting the PTI’s march to Islamabad.

“We believe that all citizens and all political parties have every right to assemble and protest peacefully,” the Human Rights Commission of Pakistan (HRCP) tweeted.

“The state’s overreaction has triggered, more than it has prevented, violence on the streets. The onus is on the government and opposition leaders to adopt a mature, democratic response and immediately begin a dialogue to end the impasse,” the group added.
Pakistan media reports say that Pakistan seems to be heading towards political confrontation following the Shehbaz Sharif government’s decision to ban the PTI march. According to Dawn, crackdowns on the opposition leaders and the sealing of the capital have created a highly volatile situation.

Pakistan Supreme Court on Wednesday restrained the present government from arresting Imran Khan and allowed PTI to hold a sit-in protest at the H-9 ground area of Islamabad.