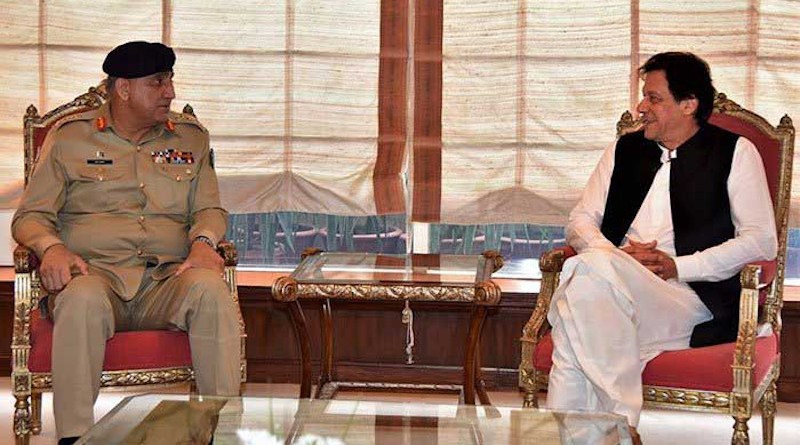 Two weeks after the Inter-Services Public Relations (ISPR) announced a reshuffle in the top brass of the Pakistan Army, posting the incumbent Director General (DG) of the Inter Services Intelligence (ISI), Lt. Gen. Faiz Hamid, as the Corps Commander of XI Corps in Peshawar and replacing him as DG-ISI with Lt. Gen. Nadeem Anjum, the stand-off between the military and the Prime Minister over the new appointments has not ended. Although government ministers are claiming that the matter has been resolved—Prime Minister Imran Khan will get a face-saver by letting him ‘choose’ the man picked by Army chief Gen Qamar Bajwa as the next ISI chief—the notification will be issued before October 25 when the appointees are supposed to assume their new charge, the damage has been done. The “one page” is in tatters. The cracks between the civilian government and its military benefactors are now out in the open. None of the protagonists—Imran Khan, Gen Qamar Bajwa or Faiz Hamid—are going to come out of this looking good. If anything, it will mostly likely put paid to the ambitions of all three—Imran wanting a second term, Bajwa another extension of two years, and Hamid succeeding Bajwa next year.

For now, efforts are being made to paper over the cracks in the civil-military relations. Although some members of the ruling party have shot their mouth off and disclosed that Imran Khan refused to be a ‘rubber stamp’, most government ministers are trying to play down the self-inflicted crisis. The Army has meanwhile kept a studied, perhaps even sullen, silence on the issue, bringing to mind the evocative phrase of a former ISPR chief that “silence is also an expression”. By all accounts, it appears that the days of the ‘Hybrid Regime’ are numbered. Forget Imran Khan winning the next elections scheduled for October/November 2023, there is now uncertainty over whether he will be able to even complete his current term.

There were many reasons for the army to see Imran Khan’s back. His governance record is an unmitigated disaster. The economy has all but collapsed. Political polarisation has made legislation contentious and virtually impossible without unleashing conflict in the polity and society. Diplomatically, Imran has angered the Americans, alienated the Arabs, and annoyed the Chinese. Relations with India are at their worst in living memory and back-channel attempts to have some kind of a working relationship were undermined by Imran Khan. But all of this could have been ignored by the military if Imran Khan had not crossed the Rubicon by committing the cardinal sin of trying to interfere in the internal functioning of the Army and politicising general officers. This is a transgression that the Pakistan Army neither forgives nor forgets.

It isn’t clear what prompted Imran to dig in his heels and rub the Army the wrong way over what ostensibly appeared to be a routine transfer of an ISI chief who had completed his tenure. Was it a momentary lapse of reason, which quickly snowballed into a full-blown civil-military crisis? Or was there a method behind the madness (or vice versa) of provoking the only prop on which his ‘selected’ regime stood? There are some half a dozen reasons, most of them overlapping and elements of all of them coming into play to explain what prompted this self-inflicted wound.

Miscommunication: It was a miscommunication that spiralled into a face-off. Apparently, the Army Chief Gen Qamar Bajwa had been discussing the need to post out Faiz Hamid with Imran Khan since, at least, last summer. The announcement appointing the new ISI chief was made by the ISPR only after Imran Khan had been consulted and he had not raised any objection to the man replacing Hamid. Imran seems to have changed his mind after the announcement was made, embarrassing the Army Chief. From that point on, things were on a slippery slope with both the Prime Minister and the Army Chief sticking to their guns. Finally a compromise formula was worked out. Gen Anjum would be appointed ISI chief by Imran Khan but after going through the motions.

Asserting Civilian Supremacy: Imran Khan was trying to ensure civilian supremacy. This is a little rich coming from him considering that he became PM as a result of the shenanigans of the military. In fact, he has survived in office only because of the military’s support and continues to depend on the dirty tricks department of the military to ensure another term for himself in 2023. Even so, since this face-off with the Army, Imran has, on at least two occasions, made remarks from Islamic history that raised many eyebrows and even more questions about what exactly he was driving at. A few days after the entire controversy broke out, Imran made a reference to Caliph Umar asking his top general Khalid to hand over command to someone else, a clear hint that a military commander (Gen Bajwa?) can be removed by the ruler of the realm. On a later occasion, he referred to the State of Medina, in which even a general was promoted to a higher rank only on the basis of his performance, which is seen as a pitch for Hamid who is credited with the ‘victory’ in Afghanistan. But unless Imran Khan has lost all touch with reality and fancies himself as having made Pakistan a mirror image of Riyasat-e-Medina where he can order the generals about, he would know that he is provoking the military leadership and only making matters worse for himself.

Political Henchman: It is no secret that Imran Khan wanted Faiz Hamid to stay on as DG ISI. Ostensibly, it was because he thought Hamid was needed in the job until things settled down in Afghanistan. But his desperation to keep Hamid is reflected in the fact that he even proposed to have ISI given the status of a Corps so that Hamid would be eligible to succeed Gen. Bajwa when his second term as Army Chief ended next November. The reason for wanting Hamid so desperately probably has less to do with any national interest and more to do with Imran Khan’s personal political interest. For nearly five years now, first as the number 2 man in ISI and later as chief, Hamid has been instrumental in bringing Imran to power and keeping him ensconced in power. He has virtually been the political henchman and hitman of Imran Khan. Hamid’s predecessor, Lt. Gen. Asim Munir, was eased out because he refused to dirty his hands pulling Imran Khan’s political chestnuts out of the fire. Hamid had no such compunctions. In fact, Imran Khan needs him now—even more than before—to fix the next elections by ramming through new elections laws, stacking the Election Commission of Pakistan with his favourites, targeting inconvenient judges, and fixing political opponents by digging up dirt on them.

Word on the grapevine is that Imran Khan wants Hamid to succeed Bajwa even though Hamid will be fourth on the seniority list when Bajwa’s term ends next year. Imran Khan’s dependence on Hamid is not going down well in the military and is leading to precisely the sort of politicisation in its ranks that the Pakistan Army abhors. Bajwa knew this; easing Hamid out of ISI but giving him a Corps to command was seen as a wise solution to the immediate problem. Only, Imran Khan’s insecurities have fouled things up to a point where he has now made Hamid even more controversial than he already was, and made him even less acceptable among his peers as the next chief. Going forward, this factor is likely to cause problems within the army, with senior generals then having a legitimate expectation of getting the top job by manoeuvring and manipulating things, to undercut not just each other  but also the current political dispensation. Unless this thing is nipped in the bud, it has the potential of escalating to a point where the internal coherence in the military could start getting compromised and the army could end up resembling the Punjab Police. Already there are reports that the controversial former ISPR chief Asif Gafoor has been lobbying for becoming the next ISI chief. Both Gafoor and his wife have become spiritual followers of Imran Khan’s wife and are said to be using her influence to get him Hamid’s job.

In-House Oracle: Astrology and the occult arts practised by the oracle in Imran Khan’s house—his wife Bushra a.k.a Pinki Pirni—are believed to be behind many decisions of state. For instance, both the Chief Minister of Punjab and the ‘Prime Minister’ of Pakistan-occupied Jammu and Kashmir are said to have been chosen after some crystal-ball gazing done by the Pirni. According to some analysts, the lady has warned Imran that Hamid needed to stay on in the ISI until at least December 4 when a solar eclipse is supposed to occur. Unfortunately for Imran, the Pakistan Army’s transfer and postings schedule don’t work on astrological calculations—not yet anyway. There are also rumours that Imran has been told that Hamid’s successor must have a name which starts with a particular alphabet.

Entitlement Of Indulgence: Imran has been treated with kid gloves by the Army. He has said the most outrageous things and committed huge blunders – calling Osama bin Laden a martyr, dissing the US Secretary of State’s remarks as ‘ignorant’, admitting that the Army and ISI have trained terrorists, spoiling relations with the Saudis – and yet the military brass has indulged him his indiscretions and transgressions. Despite the Army chief sending signals to him to change the Punjab Chief Minister, Imran Khan has refused to do it. If, after all this, Imran Khan thought that he will get away with defying the military brass once again, who can blame him?

The T.I.N.A Factor: Imran is known to have told some of his cronies that the army has no viable political alternative except him. He thinks he is indispensable for the Army because while it might be no big deal to get rid of him, replacing him with someone else is going to be a pretty big deal. It will be virtually impossible to go for an in-house change without getting Nawaz Sharif on board, which is easier said than done, what with Nawaz and his daughter Maryam going hammer and tongs at the Army’s interference in politics. While Nawaz and Maryam might still come around to settle scores with Imran, the Army might be loath to pay the price they demand. Of course, what Imran seems to be forgetting is that when the Army comes down to guillotining a political leader, constitutional and political niceties are never allowed to come in the way. There are any number of levers—legal, political, judicial—they can pull to jettison a political liability. Imran is no exception to this rule, much as he would like to think otherwise. And if all else fails, there is always the ‘one jeep and two trucks’ solution—a coup.

The next few weeks will provide some hints on how the political cookie is going to crumble in Pakistan. The opposition Pakistan Democratic Movement has suddenly become active all over again, as if it has smelt blood. There are corruption cases and the foreign funding case in the Election Commission that could be activated. The dormant Tehrik-e-Labbaik Pakistan is once again sitting on a Dharna in Lahore. A no-confidence motion has already been tabled in Balochistan. In Parliament and in Punjab, disgruntled elements could start coming out of the woodwork and challenge the current dispensation, with no ISI stepping in to bail out the government.

These are just some of the tell-tale signs of what might happen next. Meanwhile, the military will now cut its deals with people in the opposition to ensure a smooth transition – probably an in-house change, followed by early elections next summer. Whatever happens next? It is now difficult to see Imran Khan stay in office for the next 22 months when his term ends officially.