Pakistan Civil War: Why Banning of Tehreek-e-Labbaik Is Ironical 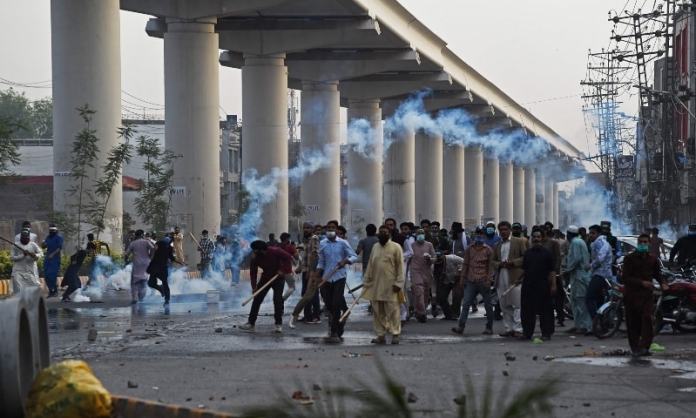 The farcical situation now is that banning the TLP defeats the army’s own original purpose: political engineering.

Following three days of horrific rioting by the Tehreek-e-Labbiak Pakistan (TLP) — which has left two policemen dead, and between 400-450 policemen reported injured (many very severely), and many major cities and arteries connecting them completely jammed by the rioters — Pakistan’s Interior Minister Sheikh Rasheed Ahmed has announced the government’s decision to ‘ban’ the TLP.

Aside from the fact that the government cannot just ‘ban’ any party, and they will have to follow a procedure involving the Supreme Court and the Election Commission of Pakistan, the irony of this decision cannot be understated.

In 2017 (when TLP was not a registered political party), the TLP goons carried out a 21-day sit-in in Faizabad, and brought life in the twin cities of Rawalpindi and Islamabad to a grinding halt. It is no secret that it had the backing of the ISI and the aim was to destabilise and humiliate the PML-N government of the time.

When the then Interior Minister Ahsan Iqbal ordered military aid to civil power, the Army Chief General Qamar Javed Bajwa refused flatly by saying, “we cannot use force against our own people. Calling the army should be the last option. The two sides should resolve the matter amicably.”

The video of another general, Major Azhar Naveed Hayat (then DG Rangers, Punjab) handing out cash rewards to the TLP ‘protestors’ also emerged, clearly implicating the army in the whole sordid saga.

How Pakistani Army Brought TLP Into the Mainstream

The TLP is also the party which, among other extremist religious outfits, was manoeuvred into mainstream politics by the country’s army brass as one of its tools of political engineering. It was thought that carving out the far right fringe from the conservative voter base of the PML-N would damage it in the 2018 general election. And to an extent, the damage was inflicted, and indeed, three ticket-holders even won seats in the Sindh Assembly, and the party emerged as the fourth largest having obtained around 2.5 million votes from around the country. This was one face of the army’s brilliant plan to mainstream the extremists.

Normally, the Pakistani Army’s Frankensteins take several years before they become a headache for it, but this time, the chickens have come home to roost rather quickly.

In the very first year of the Imran-Bajwa hybrid regime seizing power, the TLP raised its head in the Asia Bibi blasphemy case. The then TLP leader Khadim Rizvi was arrested together with its second tier leadership which had started a blasphemy campaign against the judges who acquitted Asia of blasphemy, and called for the ‘Muslim’ generals to revolt against ‘Qadiani’ General Qamar Javed Bajwa. Whatever the threats and treatment meted out to them, they were suitably chastened and remorseful.

Pir Afzal Qadri, who had actually uttered all this, read out a hilarious statement upon his release in which he apologised for “hurting” the feelings of General Qamar Javed Bajwa, and said that he had gotten carried away by his emotions because he was severely ill (with heart failure, paralysis, high blood pressure, diabetes, and kidney disease), and that he was announcing his retirement. In Pakistani lingo, his “software had been updated”.

What Led to TLP Rearing Its Ugly Head?

But late 2020, Khadim Rizvi decided he was going to challenge his creators again. He accused them of rigging the election, and threatened General Qamar Javed Bajwa fairly directly — in a speech which he was seen making in hail and hearty health. Two days later he was mysteriously dead — from COVID-19. So, one can see how fast this time the plans have gone awry, and how quickly the creature turned around to bite the hand that fed it.

The current situation, however, is being seen not just as the TLP raising its head once again against a unified State. What led up to it was also strange.

The current leader of TLP, Saad Rizvi, son of late Khadim Rizvi, was provocatively arrested a good seven days ahead of the deadline to agitate, should the government not make good on its deal with TLP with regard to expelling the French ambassador and banning French imports. Ostensibly, the riots started in reaction to the arrest.

The War Within: Power Struggle Within Pakistani Army

For three days, the State and government seemed to be paralysed while the country burned.

Most long time observers — who have been in and out of the power corridors for decades, and know the army well — say that this was a manifestation of the Deep State being at war with the State — that it was a sign of the power struggle within the army.

No wonder then, that the State was nowhere to be seen for three days while the TLP continued the mayhem.

This theory is leant credibility by the fact that when the enemy has been common (like Nawaz Sharif), the State and the Deep State have supported the TLP together in clearly choreographed campaigns. And when the State and Deep State were on the same page with regard to the issue at hand, the TLP was dealt with swiftly, as in 2018 and 2020. But what happened over the last three days came out of nowhere, a signature of the Deep State.

General Bajwa, who had not been on speaking terms with Imran Khan for the last several weeks, went running to meet him, his left flank badly exposed. So for now, they are back on the same page.

The fact that the police became sitting ducks, with no orders to take action against the rioters, suggests that the civilian bureaucracy, which never wants to cross any faction of the army, had no idea who was behind it all and decided to sit on the sidelines. Clearly, they did not think the TLP was on its own, else the police would have beaten the living daylights out of the TLP goons. The tragic result was that the bystander police force became the victim of unprecedented bestiality at the hands of the TLP.

In any case, the army always enjoys demoralising and humiliating the police force at any time — and this ‘side business’ was also achieved in the war between two elephants.

The two bizarre videos that emerged of army soldiers on a moving truck, surrounded by TLP workers, leading their ‘Labbaik ya Rasool Allah’ slogans, and TLP workers kissing the soldiers’ hands, also reflects the deep nexus of the army with the TLP.

But the images showcased a deeply schizophrenic State, whereby two security arms of the State appear in directly opposing positions: the army soldiers raising slogans with the TLP, and the TLP beating up the police.

While calm has been restored for now, this space needs to be watched as the struggle for power is not over. What cannot be ignored, though, is that Pakistan army’s genies have begun to come out of the bottle faster and faster with time, and have begun to be used by one faction against the other time and again. The Pulwama attack was a prime example of this.

The farcical situation now is that banning TLP defeats the army’s own original purpose: political engineering.

Once banned, the TLP will not be able to take part in elections, but the ban will not prevent its use in power games on the streets. The tragic part is, the Pakistani army never learns.