Pakistan Exports on the Rise with Haqqanis in Power 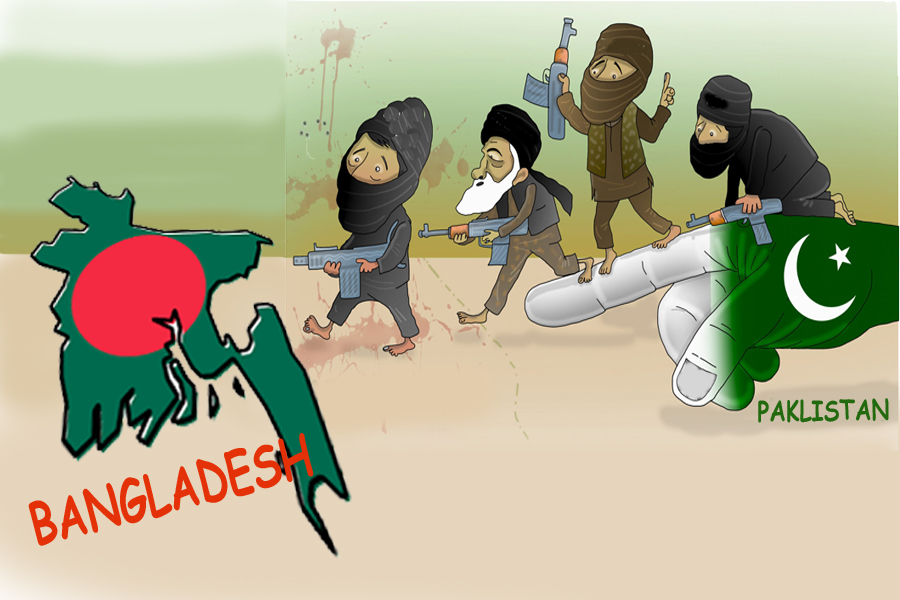 Bangladesh’s Information and Broadcasting Minister M Hasan Mahmud has said that ‘pro-Pakistan’ elements were responsible for the country’s Durga Puja communal flare-up in October this year against the Hindu Bengali community.

“The people of Bangladesh and West Bengal are well aware of who is behind this. Some parties like BNP and Jamaat believe in communalism and they capitalise on it and create instability. You all know that even during the country’s liberation struggle (1971), there were some people who supported the Pakistani army. Don’t forget that their descendants are still there,” Mahmud has said.

Sadly no ordinary Pakistan wants to be communal or a Radical, however, the manner in which the Pakistan Army and ISIS modeled Pakistan, is to be exactly that and more, an exporter of Terror, in the name of religion.

Pakistan shall continue to be a hotbed of Islamic militancy as long as the operative terrorist organizations resort to violence in the name of Islam and the public keeps showcasing acceptance of this phenomenon.

Religious radicalism has been politically institutionalized since Zia’s remedy to marginalization in Pakistan and to give himself unquestionable legitimacy. That he did by using Ulema’s support. Of course, Ulema supported Zia in return for a free hand in brainwashing Pakistani Awam away from humanity, modernity, logic and sent the nation spiraling into the dark depths of savagery and carnage.

Even after Pakistan’s post-9/11 anti-terror partnership with the United States, several Islamist groups continue to enjoy close ties with the State and popularity among certain sections of the public.

Many say, this was effected in close consultation with China, who saw this leverage of the Pakistan Army over Terrorists, useful in destabilizing South Asia.

This is where China-Pakistan collusion, using terror groups stand: whereby India, Bangladesh, Malaysia, Indonesia are now being displayed as unfit for relocation of business hubs, from China.

The riots in Bangladesh were triggered by the peddling of fake news regarding the desecration of the Holy Quran, which amplified the provocative acts between the communities and eventually sparked vandalism, violence, and arson inside the Hindu temples.

Modus Operandi has been absolutely similar to the manner in which Minority groups like Shias, Ahmaddiyas, Sikhs, Christians, and Hindus are targeted in Pakistan. Those also have the backing of ISIS in letting Radical and terror groups run amok.

What had happened in Dhaka, had Let and ISI written all over it. And it is not difficult to see why?

Deobandi Ulema of the Jamiat Ulema Islam (JUI) participates in Pakistan’s electoral politics while also describing Jihad as a sacred right and obligation while it keeps encouraging students of madrassas towards militancy.

The Haqqanis, drawing their ideology from Deobandi groups, held power in Afghanistan before 9/11 and now puppeting the Taliban, are have been a known ally of the Pakistani military and ISI.

The Radical-Terror export from the shores of Pakistan is extensive, more so since 2003. There are also reports, based on information derived from the interrogation of Jemaah Islamiya (JI) leader Hambali, who was arrested in Thailand in August 2003, that indicate that he had made a decision to shift JI elements to Bangladesh in response to recent counter-terrorist activity in Southeast Asia.

Fundamentalist Bangla Bhai, who has close links to Pakistan Army’s ISI, promotes Islamic revolution in Bangladesh, has been accused of having ties to the Jamaat-e-Islami (JI) which was somehow a coalition partner with the previous BNP government.

Bangla Bhai fought in Afghanistan and was recruited by ISI to install a Taliban-style government in Bangladesh particularly in areas bordering India.

His supporters have the task of terrorized communists, leftists, liberal intellectuals, Hindus, Christians, members of the Islamic Ahmadiyya sect, and Buddhists in the cause of promoting Islamic extremism.

Not only this sounds like the textbook of the Pakistan Army’s genocide of its minority, using radical groups, it’s evident that it’s not an experiment, but the execution of a well-laid put plan by Pakistan, to threaten the image of the booming economic growth of Bangladesh.