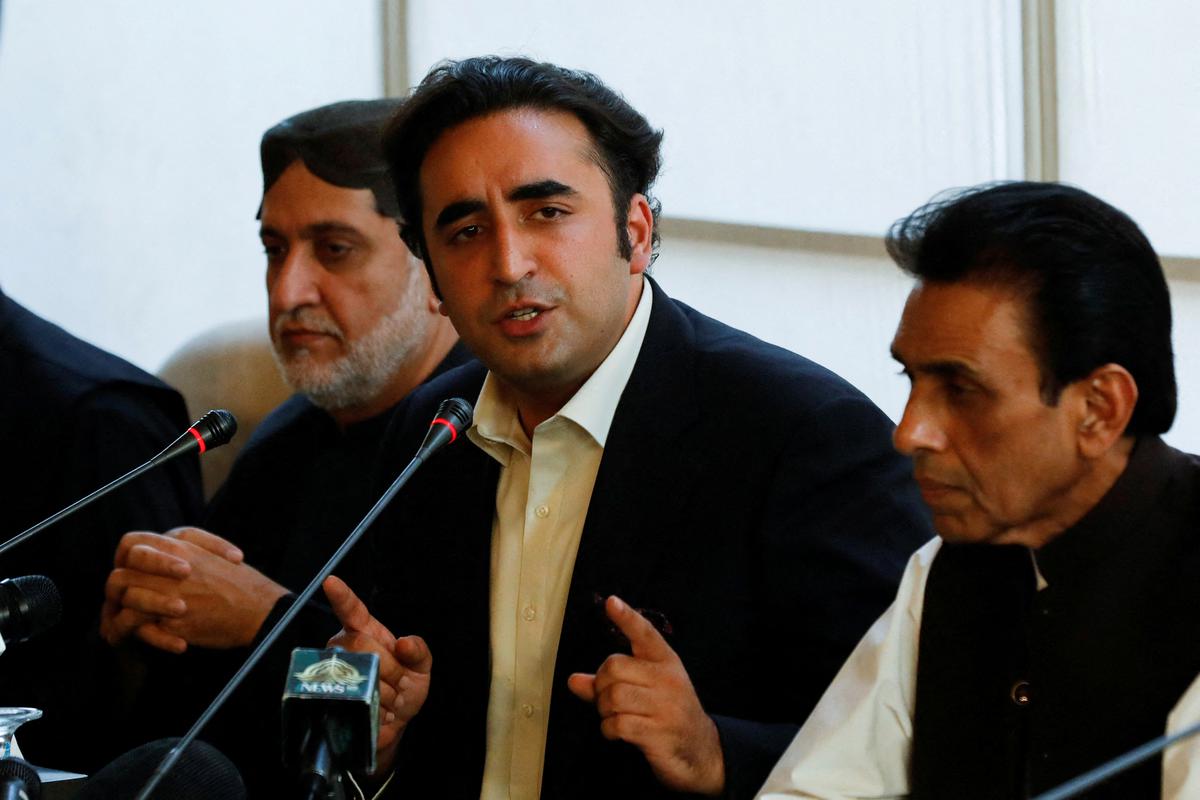 Pakistan’s newly-appointed Foreign Minister Bilawal Bhutto Zardari held talks with his Chinese counterpart Wang Yi on Sunday in the Chinese city of Guangzhou to firm up the all-weather ties between the two countries.

This is Mr. Bilawal’s maiden visit to China after he took over as Foreign Minister following the fall of the Imran Khan-led government last month.

Their meeting was held in Guangzhou as Beijing is currently under semi-lockdown to contain the fast-spreading Omicron variant of the COVID-19.

The 33-year old, whose mother Benazir Bhutto and grandfather Zulfikar Ali Bhutto were former prime ministers, is just back from New York where he held talks with the U.S. Secretary of State Antony Blinken and discussed strengthening the U.S.-Pakistan relations which deteriorated during the previous Imran Khan regime.

In his interviews to the media after his talks with Mr. Blinken, Mr. Bilawal ruled out that Pakistan’s growing relationship with the U.S. would hurt its ties to Beijing.

Mr. Bilawal is accompanied by Minister of State for Foreign Affairs Hina Rabbani Khar and other senior officials.

Ahead of his visit, Chinese Foreign Ministry spokesperson Zhao Lijian on Saturday congratulated Pakistan and China on the 71st anniversary of the establishment of their diplomatic relations.

“Congratulations! May 21 is the 71st anniversary of the establishment of diplomatic relations between China and Pakistan. FM Bilawal will visit China from May 21. #Thisisdoublehappiness,” he tweeted from his official account.

Mr. Bilawal’s two-day visit marks the 71st anniversary of the establishment of diplomatic relations between Pakistan and China.

On May 21, 1951, Pakistan and China established diplomatic ties almost a year after India.

India was the first non-Communist country in Asia to establish diplomatic relations with the People’s Republic of China on April 1, 1950.

Bilawal had earlier held talks with Wang through video link on May 12, followed by a virtual meeting between Pakistan Prime Minister Shehbaz Sharif and Chinese Premier Li Keqiang.

Their talks were focussed on strengthening the safeguarding of safety for Chinese citizens and institutions in Pakistan in view of the spate of attacks on Chinese nationals, including the recent suicide bomb attack at the Karachi University, and revitalising the $60 billion China-Pakistan Economic Corridor (CPEC) which is bogged down by delays.

India has protested to China over the CPEC as it is being laid through Pakistan-occupied Kashmir (PoK).

Close ties between Pakistan and China in the last four decades, widely believed to be aimed at countering India, remained steady despite the periodic political crisis in Pakistan leading to a change of governments, including those by the military rulers.

During their talks, Mr. Bilawal and Mr. Wang will review the entire gamut of bilateral relations, with a particular focus on stronger trade and economic cooperation between Pakistan and China, Pakistan Foreign Office said on Friday.

In April, Bilawal’s predecessor Shah Mehmood Qureshi during his visit to China had announced that Beijing has agreed to roll over $4.5 billion debt due to be paid by Pakistan this year.

On Friday, Chinese Foreign Ministry spokesperson Wang Wenbin said Mr. Bilawal’s visit will see his hope of taking China as the first destination of his overseas visits realised and also marks the first in-person high-level interaction between the two countries since the new Pakistani government was formed.

“As all-weather strategic cooperative partners, it is necessary for China and Pakistan to strengthen communication and coordination on major strategic issues and jointly respond to new developments in the international and regional situation and various risks and challenges,” Wang Wenbin said.

He said Wang Yi will hold a comprehensive and in-depth exchange of views with Mr. Bilawal on bilateral relations and issues of common interest.

“China hopes to take this visit as an opportunity to renew our traditional friendship, consolidate strategic mutual trust, further deepen our all-weather strategic cooperative partnership and build a closer China-Pakistan community with a shared future in the new era,” the spokesperson said.

“Given the challenges faced by the peoples of the region, due to global pandemic, soaring commodity prices, climate change and poverty, it is critical to resolve all outstanding disputes to promote regional cooperation and advance the goals of lasting peace, stability and shared prosperity,” Pakistan state-run APP news agency quoted the joint statement as saying.

While it said Bilawal has “briefed the Chinese side about the latest developments in Jammu and Kashmir”, the reference to all “outstanding disputes” raised speculation whether it also alluded to the border dispute between India and China, especially the current over two year long military standoff at Eastern Ladakh.

“The two sides underlined the importance of the peaceful resolution of the dispute based on the UN Charter, relevant Security Council resolutions and bilateral agreements,” it said, apparently referring to the Kashmir issue.

“The two sides call upon the Afghan interim government to develop a broad-based and inclusive political structure, adopt moderate and sound internal and external policies, and protect the rights of women and children and ensure that the Afghan soil was not used against any of its neighbours,” it said.

Pakistan and China have reaffirmed their strong support for each other’s core interests and major concerns and commitment to deepening strategic communication including at the highest political level and practical cooperation, the APP report on the talks said.

Bilawal’s visit coincided with the 71st anniversary of the establishment of diplomatic ties between China and Pakistan. On May 21, 1951, Pakistan and China established diplomatic ties almost a year after India.

During the visit the two ministers held in-depth discussions on the entire gamut of bilateral relations as well as regional and international issues of shared interest.

A press release issued by China’s Foreign Ministry said Chinese and Pakistan Foreign Ministers have agreed to issue an “enhanced version” of security protocol to protect thousands of Chinese personnel working in Pakistan in view of the recurring terrorist attacks against them, especially the recent suicide attack by a woman suicide bomber of the Balochistan Liberation Army in Karachi university that killed three Chinese nationals.

The two ministers have “agreed that any terrorist attack against Chinese citizens in Pakistan is unacceptable, any despicable attempt to undermine China-Pakistan friendship will not succeed, and incidents such as the terrorist attack on the Confucius Institute in Karachi must never be repeated”, the press release said.

“The two sides agreed to issue an “enhanced version” for safeguarding the safety of Chinese personnel, institutions and projects in Pakistan, and will formulate specific plans for implementation as soon as possible,” it said.

“The two sides called on regional countries and the international community to form a joint effort to combat all forms of terrorism,” it said.

The joint statement said “both sides expressed firm resolve to synergizing development strategies, pushing forward all CPEC projects in a safe, smooth, and high-quality manner, promoting cooperation in areas such as economy and trade, investment, industry, agriculture, health, and science and technology, contributing to the peoples’ well-being and delivering greater benefits to local communities.” The two sides expressed satisfaction at the growing momentum of bilateral defence cooperation and exchanges.